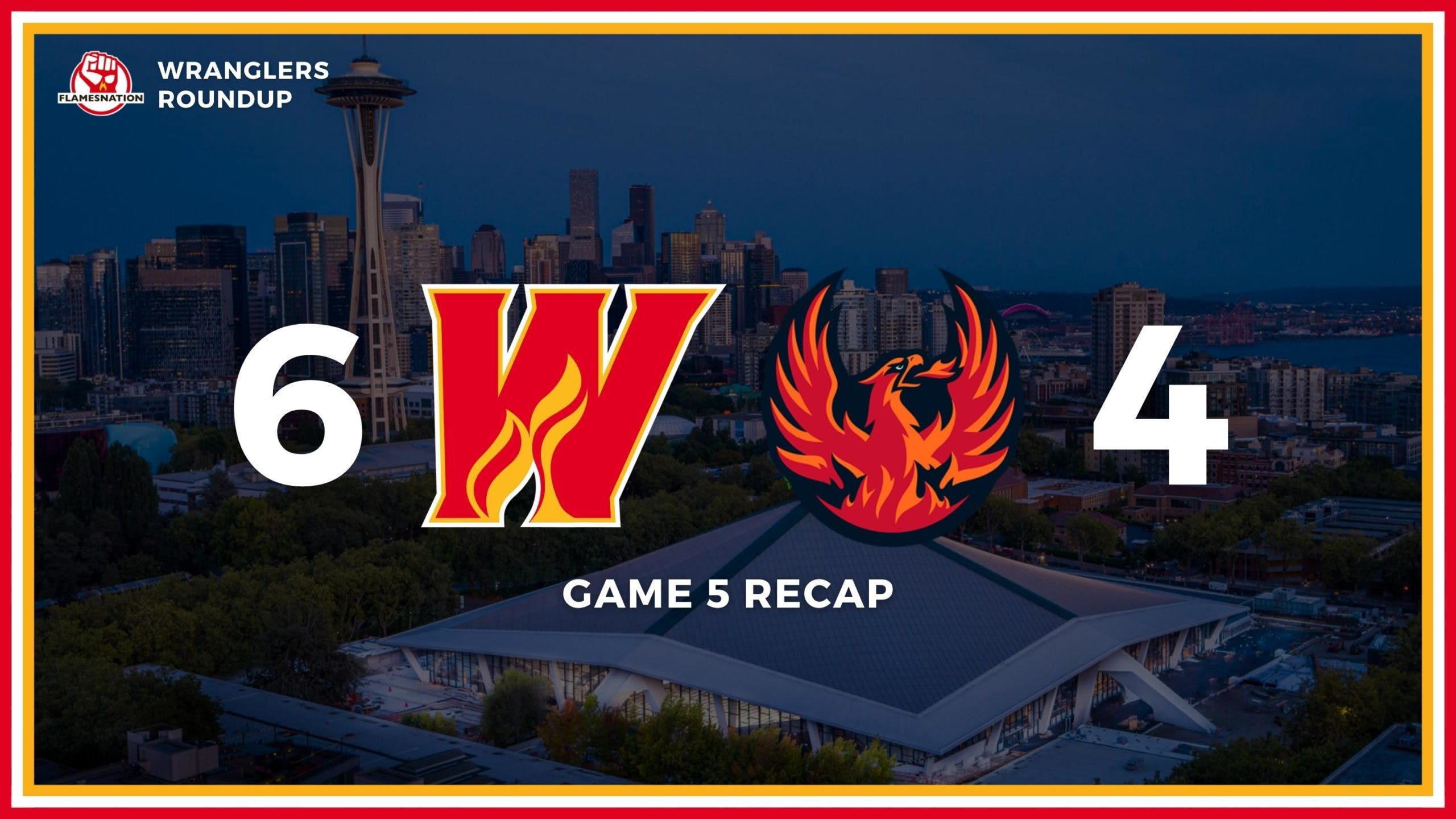 By Paige Siewert
3 months ago
The Calgary Wranglers’ road trip continues as they hit the road to Everett, WA for a series rematch against the Coachella Valley Firebirds. They finally got the monkey off their back with a win last weekend and are looking for another one to start climbing the division standings. They started their inaugural season against Coachella Valley and had a pair of less-than-ideal games that resulted in their first two losses of the season. Calgary found a way to keep things rolling into this weekend and beat the Firebirds 6-4.

Dustin Wolf got the start in his homecoming game. The scoring action took some time to get started with most of the first period being played without anyone lighting the lamp. Jakob Pelletier finally strikes on the power play for the first of the game and his first goal of the season. Connor Zary and Matthew Phillips picked up assists.
The first finished up with a 1-0 Wranglers lead. In the second, there was some heavy Wranglers scoring action with Ben Jones finding the back of the net just 2:31 into the period with some dirty dangles on a shorthanded breakaway. His goal was followed by Pelletier’s second power play goal of the night just over two minutes later.
20 seconds later, Mitch McLain hit the scoreboard with a goal assisted by Jeremie Poirier. This was also McLain’s first goal of the season. It was an excellent three-minute run of scoring off their first three shots of the period, and that wasn’t even the end of it.
16:50 into the second, Radim Zohorna scored a power play goal for the Wranglers fourth of the night and his second of the season. Cole Schwindt picked up the lone assist. The Firebirds snuck a goal in before the end of the period exactly a minute later. After 40 minutes, this game was up to a 5-1 lead for the Wranglers.
The goals continued into the third and the Wranglers were fortunate they had a lead to work with. Coachella Valley scored their second 1:49 into the period and Mitch McLain answered back a minute later. Closer to the midway mark of the period, the Firebirds picked up another pair of goals and the gap closed to 6-4 on the scoring front.
Thankfully, that concluded scoring for the Firebirds and the damage was kept to a minimum. The Wranglers got some redemption against the Firebirds and dealt them a loss on their home ice. Shots ended 36-25 favouring Coachella Valley and the score finished up at 6-4 for Calgary.

Two Wranglers-affiliated guys in particular had a special trip to Everett this weekend. Wranglers Head Coach, Mitch Love has ties to the Everett Silvertips as a coach and a player. He returned to his old home arena and surely the memories came flooding along with that. Love’s number was also retired and hangs from the rafters of Angel of the Winds Arena.
Another Silvertips alumnus was Dustin Wolf. Even with them being on the road, some local fans very likely came out to see Wolf in their local rink once again. He was a Silvertips standout between 2017-21 winning the WHL goaltender of the year with this team in the 2019-20 and 2020-21 seasons. He kept his reputation in check with a solid 25-save night and a win in a rink he knows very well.

In the standings, things are looking up for the Wranglers as they have climbed to the eighth spot in the Pacific Division. They will stay in town for another night to face the Firebirds on Saturday afternoon. If they pull off another win, they will even up the season series against the Firebirds and possibly go up another spot or two in the standings. Game time will be at 4:00 p.m. MT.
News
Recent articles from Paige Siewert