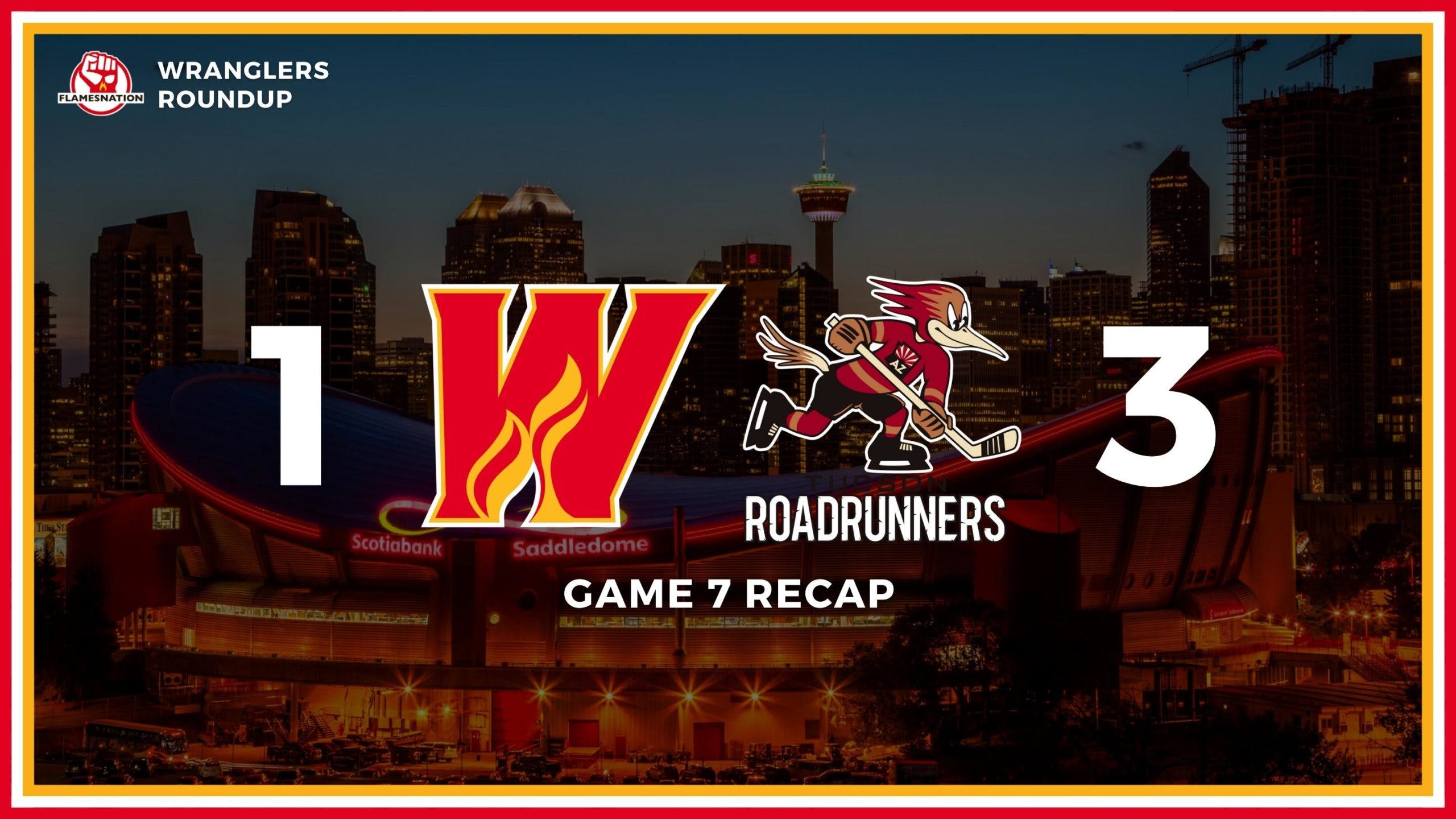 By Paige Siewert
3 months ago
Tucson is in town for a few days to take on the Calgary Wranglers at the dome. Their series started on Wednesday night where the Wranglers sure got their shots in through two periods. Shots were 30-9 for Calgary by the end of 40 minutes but the score was evened up at 1. Tucson’s goaltender, Ivan Prosvetov, had a very solid night between the pipes and with zero Wranglers shots in the final 20 minutes, they fall for the third straight game at home 3-1.

No sign of former long-time Stockton Heat goaltender Jon Gillies as Ivan Prosvetov and Dustin Wolf get the start in net on their respective sides. Prosvetov was tested early with quite a bit of action at his end of the ice and turned it away quite easily.
The Wranglers looked really good to start with some great zone pressure and peppering their opposing goalie with shots. Shots were weighed 12-2 in the Wranglers’ favour before the first goal occurred and unfortunately, it was for Tucson.
Jean-Sebastien Dea scored the first of the night at 12:31 into the period. Unfortunately, this also happened to occur on the third shot of the net. Calgary didn’t let this flip the momentum of the period much as the Roadrunners only got one more shot off the whole rest of the period. Instead, the Wranglers capitalized on a late power play with a goal by Connor Zary with 31 seconds to go in the first.
Zary is up to four straight games with points and was assisted by Matthew Phillips, who is up to a five game point streak and also assisted by Jeremie Poirier.
The second period didn’t bring any additional scoring, just a pile up of penalties and Wranglers shots. Tensions raised after the horn rang to signal the end of the second period and four offsetting penalties were dealt. Two a side. Shots after the second period were a whopping 30-9 for the Wranglers.
Matthew Phillips was happy with the performance through the first 40 minutes of play saying,

“I think the first and second were probably two of the best periods we played this season. We came out really strong and just simple predictable hockey. That’s why we were kind of controlling the game.”

The unfortunate part is the third period didn’t echo the same level of play. The third started with four players in the penalty box as a result of the rough stuff at the end of the second. It would be the Roadrunners who would be the next to light the lamp.
Just under five minutes into the period, Wolf oddly lost his mask for the second time this game. This time the puck ended up in the back of the net around the same time his mask hit the ice. The play was very briefly reviewed and the goal stood. Here’s a look at that play.
The third was very uncharacteristic of the Wranglers compared to the first two periods. Even down a goal, they were unable to register a shot in the third period. Not the kind of performance you need from a team looking to come back in a game they held quite a bit of control in.
They pulled Wolf late in the game for the extra attacker and even then, no shots on goal. They were getting stuck with offensive zone faceoffs that would pull him off the bench so they did not get as much time generating offence as they probably needed. The Roadrunners snuck one more goal in the empty net with six seconds to go and that secured the game at 3-1.
Head Coach Mitch Love said post-game,

“I’m not sure we want to get in a real rhythm of having zero shots in the third period on home ice.”

He went on to mention how burning minutes on the penalty kill wore down their lines and they hit a wall that pretty much prevented them from making it into the offensive zone. Love continues,

The Wranglers need to find a way to shut the door on their opponents and hold leads while they have them. After this loss, their record falls to 2-5-0-0 on the season and their spot in the standings sits at ninth in the Pacific Division.

The Roadrunners will stick around for a couple of days to complete the series on Friday afternoon. Game time is set for 1:00 p.m. MT. If you are able to get out of work or school or any other day activity you have going on, there are some pretty good ticket deals to check out to incentivize fans to make the trek for an early afternoon game.
If not, the game feed will be available on AHL.TV and FlamesNation will have post-game coverage.
News
Recent articles from Paige Siewert