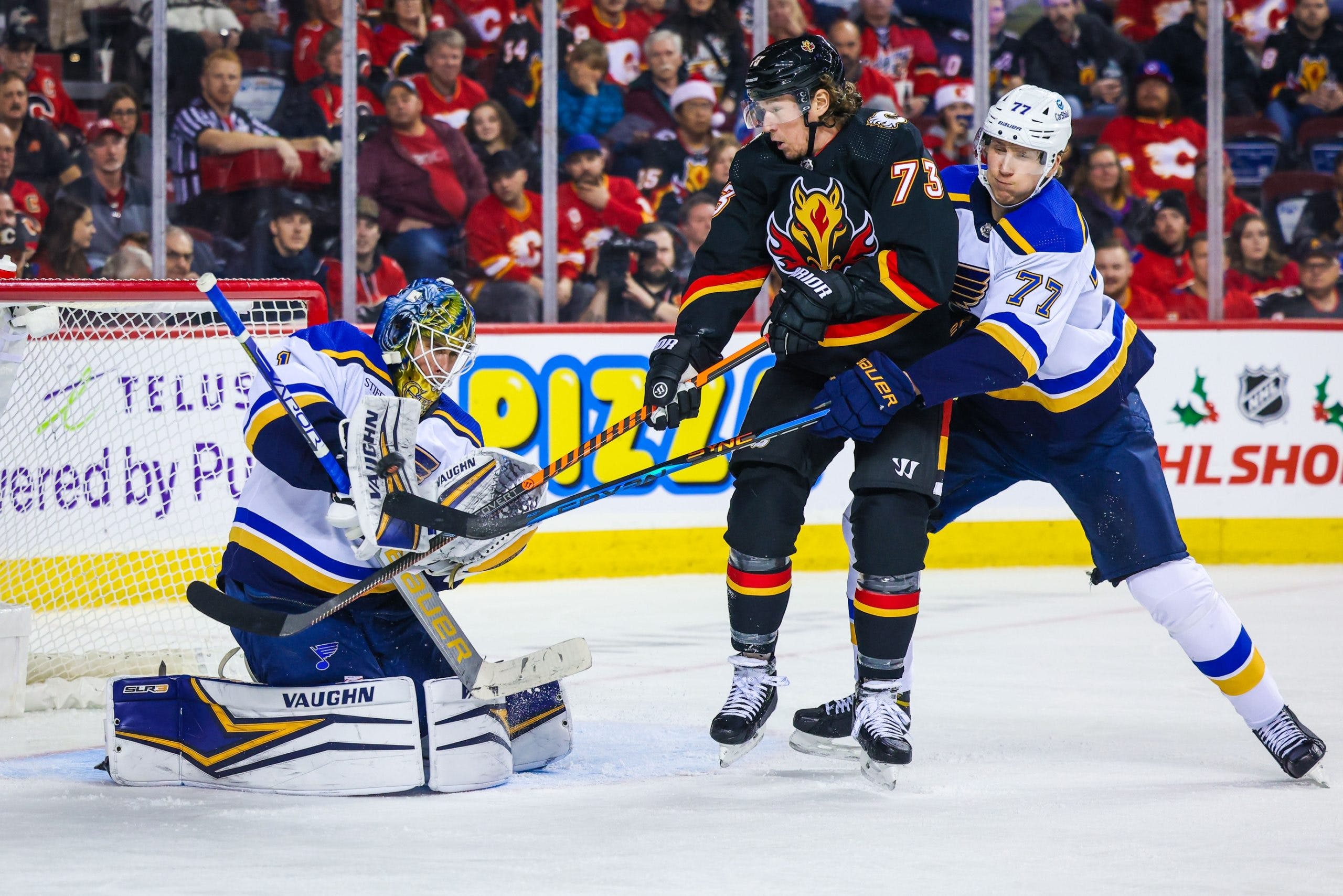 By Ryan Pike
1 month ago
If there’s a theme lately in the post-game press conferences with Calgary Flames head coach Darryl Sutter, it’s that his hockey club isn’t playing terribly. They’re in the thick of their games. They’re getting shots. They’re getting chances.
But on Friday they found a way to lose, dropping their fifth game in a row – this one was a 5-2 loss to the St. Louis Blues. The loss puts the Flames back on their heels a bit heading into a four-game trek to California.
On Friday, a few defensive miscues in their own end in a close game caused things to unravel in the third period.
“2-1 going into the third,” said head coach Darryl Sutter following the game. “Really poor back-checking by one of our forwards and then turnover below our goal line. One goal game going into the third, you can’t make those mistakes.”
On the 3-1 goal, Andrew Mangiapane chased Brayden Schenn in the Flames zone, which left Ivan Buchnevich wide-open for a pass from Schenn… and with a pretty clean shooting lane. On the 4-2 goal, blueliner Connor Mackey threw a back-hand pass up the middle which was intercepted by Brandon Saad – Sutter quipped that only Cale Makar can make that type of pass.
Regarding the mistakes, Sutter had a pretty simple solution.
“Just don’t make ’em,” said Sutter. “That’s not a complicated part of it either. Check for chances.”
The Flames out-shot the Blues by a 43-24 margin. It’s the ninth time they’ve put up 40 or more shots in a game this season. In all those games, they out-shot they opponents fairly significantly – the smallest shot margin was 11 shots. They’re 2-6-1 in those games.
In their 40+ shot games, the Flames have out-chanced the opposition 254-192 at five-on-five, and had a high-danger chance edge of 94-72. High-danger goals? They’re even at 11 apiece. The shape of their game is generally good. Occasionally it’s really good.
But their execution? It’s been lacking.
The Flames allowed three five-on-five goals against the Blues that were the results of mistakes. Elias Lindholm’s pass to the point in the first period was intercepted for the 1-0 goal. Mangiapane made a bad poor back-check on the 3-1 goal. Mackey made a poor decision on the 4-2 goal. Mistakes happen.
Against the Blues, the Flames were attempting smart plays, but the execution was off – Lindholm was trying to tee up a point shot for Nikita Zadorov, for instance. Passes just didn’t have enough on them to get to their intended recipients. It happens. Hockey’s a game of mistakes played by imperfect humans. The danger facing the Flames right now is possibly becoming so afraid of making mistakes that they they play it too safe.
In hockey, as in life, safe is often death. The Flames need to be better at executing on their plays, but a team that doesn’t score a lot of goals can’t become afraid to attempt them.
After a fifth consecutive setback, where do the Flames go from here? California, where they hope to get their season back on track with a quartet of games against divisional opponents.
Editorials
Recent articles from Ryan Pike