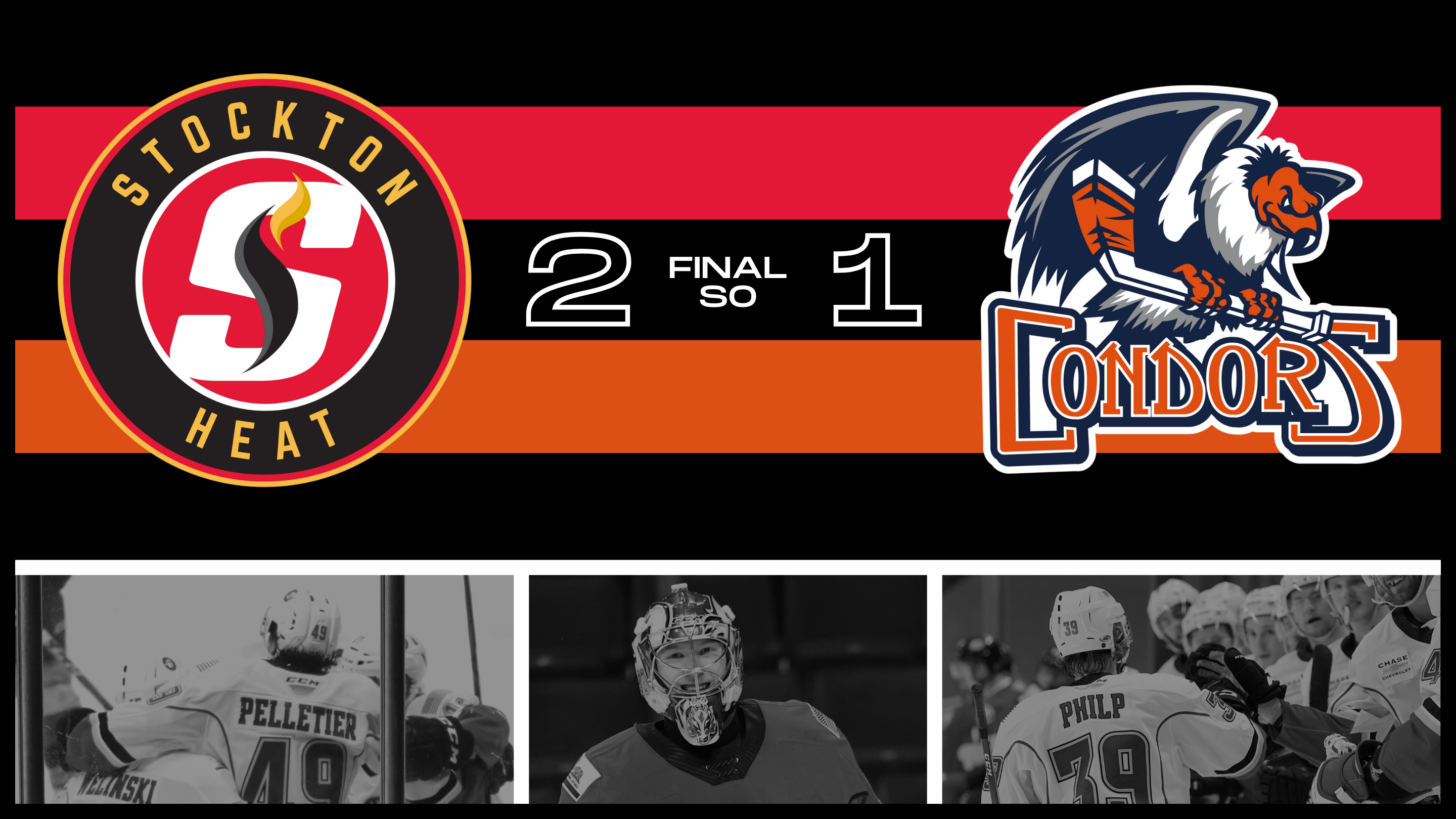 By Paige Siewert
11 months ago
The Stockton Heat returned home to kick off their first of three games this week. Their homestand started with the Edmonton Oilers affiliate, the Bakersfield Condors, coming to town for their third match-up of the season. Their previous two were on the road where the Heat won 4-2 early in the season and 5-4 in overtime about a month ago. Wednesday’s game also involved some extra gameplay. This time going to a shootout where the Heat earned the win by a score of 2-1.

A lot of credit goes to the netminders in a low scoring game like this one. It wasn’t from lack of offensive opportunity by any means. The Heat and the Condors both put up their fair share of shots. The Heat ultimately had the edge ending at 37 to the Condors 31.
On paper, this should have been Wolf’s game to win and in the end, it was. Dustin Wolf has added another win to his near-perfect season to earn himself a 12-0-2 record to lead the league in the win category. His save percentage has climbed to .941 save percentage and a 1.83 goals against average. Both these stats put him at top three in the league in those goaltending categories with the third best save percentage and second best goals against average in the AHL.
Ilya Konavolov’s stat lines are not quite at the elite level Wolf has been able to maintain this year. He’s only earned two wins on the year and sits at a .895 save percentage and a 2.67 goals against average. Both goalies played a great game to keep things close, but it was Wolf that held things together for his team all the way to the end of his first AHL shootout.

Low scoring better than no scoring?

There was a lot less to report in the scoring category for the Heat than in recent games. So far, there has not been any trickle down from the Flames’ COVID-19 situation that resulted in any subsequent call-ups beyond Adam Ruzicka and Byron Froese, who were already with the Flames when this situation began. It is tough to say at this time if the Flames will need to pull some Heat skaters to fill their lineup in the near future.
To keep things present, however, here’s a look back at Tuesday’s game. The regular scorers such as Jakob Pelletier and Matthew Phillips were actually not among the ones who found the back of net in this one. Instead it was Andy Welinski that opened up the Heat scoring in the first period.
Despite being involved in quite a few of the Heat’s goals this year, this was actually Welinski’s first goal of the season. Welinski had 12 assists in 20 games before this goal and earned himself a second star in this game for the only Heat goal in regulation.
The Condors got one of their own at the 15:10 marker in the second period. The rest of regulation would go on without any other goals. The Heat had five chances on the power play and did not capitalize on any of them. They would go 1 for 1 on the PK.
It was mostly Bakersfield in overtime as they got six shots on net to the Heat’s one. Wolf continued to hold down the fort and got the Heat to a shootout. The shootout would only be two rounds as both Heat shooters would find the back of the net. They were Justin Kirkland and Glenn Gawdin. Neither of Bakersfield’s shooters were able to beat Dustin Wolf.

This weekend in Stockton

The Heat will continue to stay at home for the rest of the week where they will host the Colorado Eagles at the Stockton Arena this weekend. Friday night’s game time will be at 8 p.m. MT and Saturday’s game will be at 7 p.m. MT. By no surprise, they still hold strong in the standings. They lead the Pacific Division and are just below the Utica Comets as the second best team in the league. If the Flames delays have got you down, I recommend watching some Heat hockey to get your Flames fix while also enjoying some great games of hockey. They really are the team to watch right now.