Heat Post-Game: The redemption routine continues against the Roadrunners 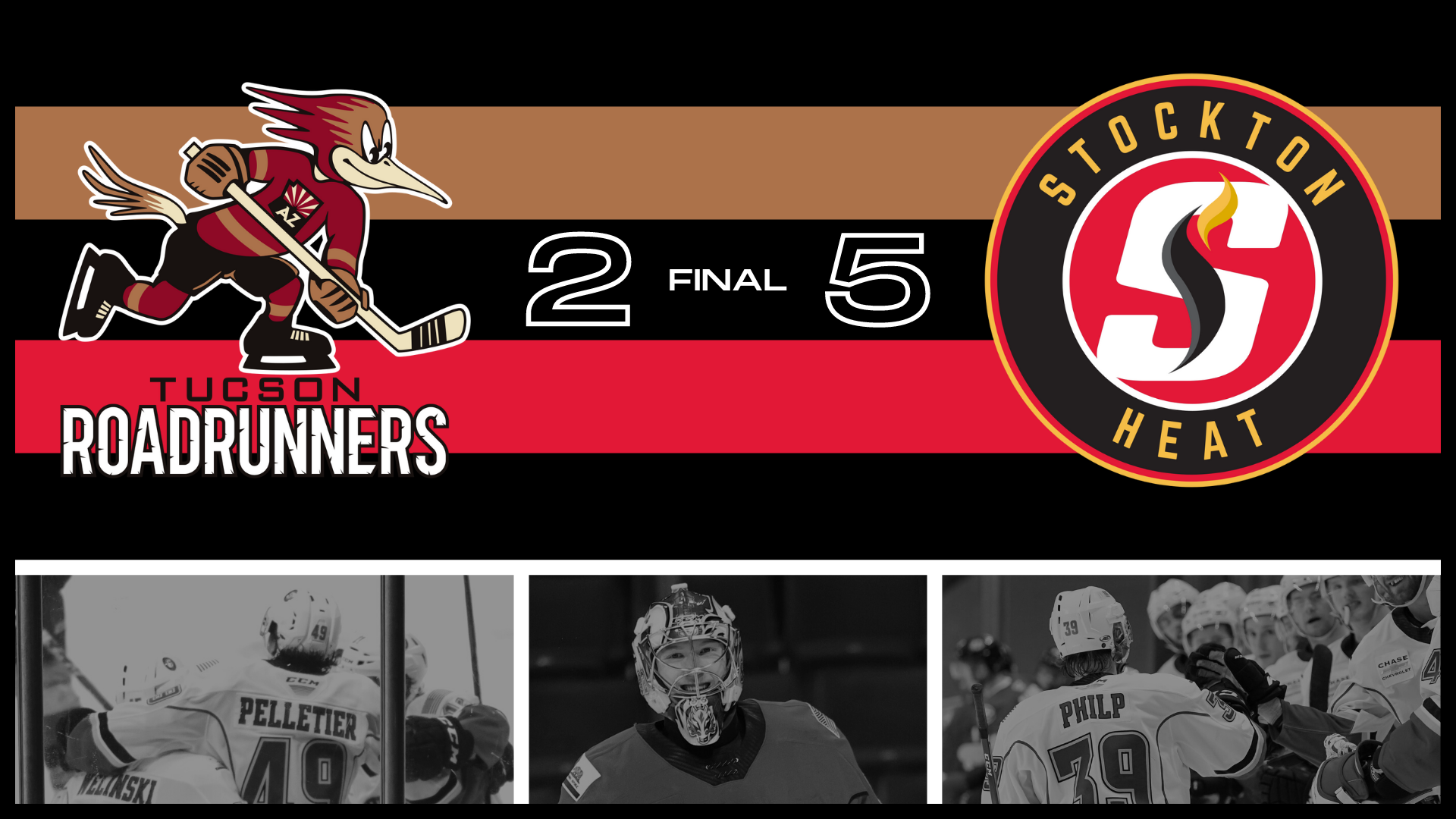 By Paige Siewert
1 year ago
Well, sometimes good things do come in threes. For context, the Stockton Heat have dropped the first game of their last three series against the Tucson Roadrunners. The good news? They have returned in the second game of the series to earn the win. That was the same story on Wednesday night. The Heat started things off with some quick scoring and chipped away at their lead to beat the Tucson Roadrunners 5-2 and earn a split on their series.

The Stockton Heat set a season record for themselves scoring just 54 seconds into the game. Matthew Phillips scooped up the puck off the draw and scored on a skilful sharp angle shot to give the Heat an early lead.
Beyond that, the first 5-10 minutes of the period was very much swayed towards the Heat. A few other skaters had their looks and could have quite easily broken this game open before the first media timeout.
Just past the midway mark of the period, Connor Zary was on the receiving end of a pretty nasty hit and it was Eetu Tuulola that came to his defence. Zary was already a little banged up coming into this game as he was rocking a mean looking black eye.
Even with the fighting majors, the Heat ended up on the power play as the Roadrunner skater was whistled for charging on Zary. Play went on from there and at the 15:33 mark, Glenn Gawdin was hooked on his charge to the net and given a penalty shot. With the pressure on, he scored with a quick fakeout. This one is worth a watch.
The Heat comfortably secured a 2-0 lead going into the locker room at the first intermission. The second period was filled with a plethora of goals on each side with four in total. Greg Moro scored his first goal of the season as he is regularly a member of the Heat affiliated Kansas City Mavericks of the ECHL but got some playing time in on Wednesday to fill in for some injuries. This goal came at the 3:49 mark in the second period and was assisted by Martin Pospisil and Walker Duehr.
The Roadrunners got one back a couple of minutes later but Eetu Tuulola would score on the penalty kill before they could tack on another. It was a little bit of a broken play but it paid off. Tuulola’s goal was assisted by Duehr with his second assist of the night and Colton Poolman.
Shortly after Tuulola’s goal, Tucson switched their goalie out for some damage control. In the last three minutes of the period, the Roadrunners got one more goal back and that would be the end of their production for the evening. The Heat went into the third period again comfortable on the scoreboard with a 4-2 two goal lead.
The third period was much quieter with not a lot of scoring but four Heat penalties that could have caused them trouble if the Roadrunners were able to make something happen. No scoring occurred until the 17:46 mark in the third when Justin Kirkland scored his third goal in as many games on a short-handed empty-net situation.
Time ran out and the Heat took this game back for the series split and won 5-2. They outshot the Roadrunners 29-26 and Adam Werner stopped 24/26 in a much better individual and team outing.

If you followed along with Stockton’s previous game against the Roadrunners, you would have seen they gave up two power play goals on Tuesday. On Wednesday they got their redemption for these in arguably the best way possible. Shorthanded. Three out of the five Heat goals in this competition were in special teams scenarios. One penalty shot and two short-handed goals.
Their penalty kill was back to their standard with a perfect 6/6 kill on the night. They had four power play opportunities of their own but did not score on any of them.

One more out of protocol

Adam Werner dressed and returned to play in this game after being included in the Covid-19 protocol announcement released by the team last week. He got the start and gave Dustin Wolf a little relief after starting the last two games for the Heat. Juuso Valimaki was back Tuesday and Werner returned Wednesday. Bit by bit, the Heat are getting a little healthier. The only Heat skater still in protocol is Emilio Pettersen. All eyes will be on the lineup sheet to see if he returns for the weekend.
Other Heat skater absences included Andy Welinski and Ryan Olsen, who are both out with upper-body injuries.

Their mid-week match-up may be over, but the Heat still have more hockey to play this week. They will play two more games on the weekend to continue their road trip. They head to San Diego next to play the Gulls on Friday night at 8:00 p.m. MT then they will visit Ontario to play the Reign on Sunday at 4:00 p.m. MT.