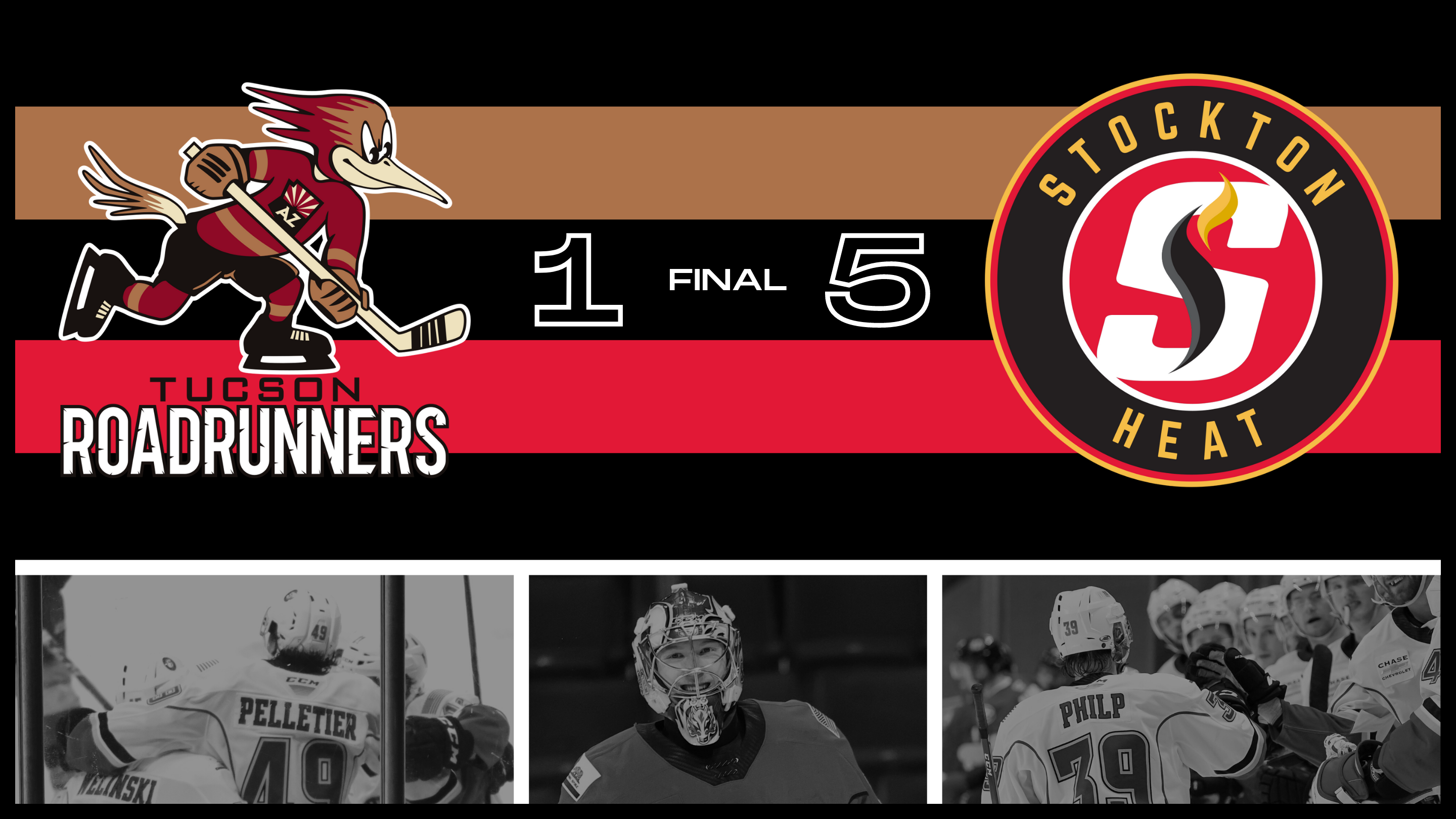 By Paige Siewert
11 months ago
After falling in the shootout on Friday night, the Stockton Heat got another shot against the Tucson Roadrunners on Saturday and earned a rematch victory. They head home from the weekend series with a total of three out of a possible four points. Saturday’s win was a lot less back and forth with the Heat winning 5-1 and some less familiar faces finding their way on the scoresheet.

Now if you followed along with Friday’s game, you probably expected Matthew Phillips and Jakob Pelletier to keep things rolling and possibly earn themselves another multi-point night. A fair assumption, as those two put up two goals and an assist each in the night prior, against the same goaltender they would see on Saturday. In an interesting turn of events, it would actually be their teammates farther down the depth chart that would take care of the scoring in the back half of their weekend series. Out of the two, Phillips was the only one who earned a point off an assist on the Heat’s fifth and final goal of the night.

So who scored, then?

A name you may not have heard around the Flames organization too much so far is Ilya Solovyov. The 2020 7th-round draft pick joined the Heat this year for his first season in the AHL and Saturday was a big night for him. He played in his 12th game with the Heat and not only scored what would be the game-winning goal, but also netted his first goal in the AHL. That wasn’t the end of it either. He also closed the Heat scoring in the third to earn himself a multi-point night.
Here’s a look at Solovyov’s first North American professional goal. Eetu Tuulola picked up the lone assist.
Prior to this goal, Glenn Gawdin opened the scoring at 15:57 with a feed from Emilio Pettersen.
The Heat would finish the first period, ahead 2-0. In the second, a guy looking to boost his production this season also found the back of the net. This was Connor Zary. He made Martin Pospisil’s neutral zone efforts worthwhile as Pospisil forces a turnover and Zary buries it.
The Tucson Roadrunners would put one on the board with just 12 seconds to go in the third period and this triggered their teddy bear toss activities. Since there was so little left to go in the period, the teams made their way back to their respective locker rooms and started the third period with an extra 12 seconds to allow for teddy bear collection time.
The Heat tacked on a pair of goals in the third before even hitting the six-minute mark. Emilio Pettersen scored his first goal of the season at 3:22 and with Zary and Pospisil assisting they also joined the multi-point night accomplishment. And really, how do you go about defending this?
2:21 later, Solovyov got another look at Ivan Prosvetov and lit the lamp once again.
The Heat faced the same goalie they peppered with 51 shots on Friday, and get the job done on Saturday outshooting the Roadrunners 35-30.

Dustin Wolf got the start for the second game of this Tucson series and with another win under his belt, he keeps his regulation win streak going strong. Wolf is still undefeated in regulation this year and stays among the top goaltenders in the AHL. Saturday’s performance puts him at an 11-0-2-0 record on the year, third in league GAA with 1.90, second in league save percentage with .939 and first in the league in the win category.
There is little to worry about with Wolf between the pipes for the Heat and Adam Werner’s mostly solid ability to eat up some ice time is ensuring Wolf is getting his looks, but not being overworked by any means.

The week of Dec. 13th gives the Heat another three opportunities to earn some points before things wind down a bit around Christmas. They host the Bakersfield Condors at home for a mid-week game on Wednesday at 7:30 p.m. MT. They will continue their homestand for the weekend with the Colorado Eagles in town for a pair of games. Those will take place on Friday at 8 p.m. MT, and on Saturday at 7 p.m. MT.
As things stand, the Heat sit at the top of the Pacific Division with the Ontario Reign below them and second overall in the league just below the Utica Comets.