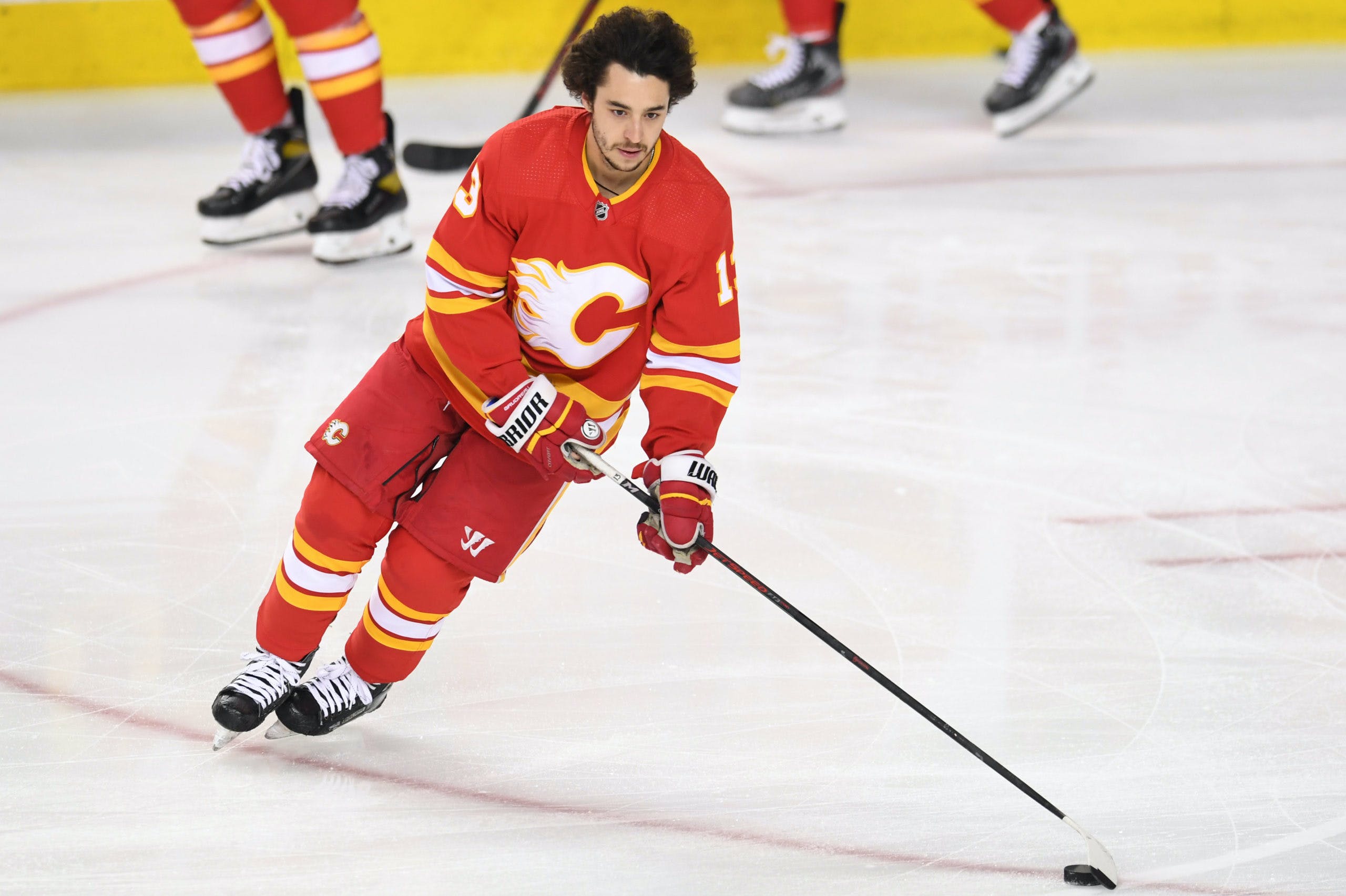 By Pat Steinberg
9 months ago
With 80 down and two more (regular season) games to go, we have beyond a large enough body of work to put together a few year-end award winners. In a season slammed with positive team and individual stories, it seems fitting to recognize the best in class for 2021-22. Yes, the playoffs are what matter the most, but one of the best regular seasons in franchise history shouldn’t be ignored.
Before getting into the award explanations, here are a few others that really don’t need one:
Best Goaltender: Jacob Markstrom
Best Two-Way Forward: Elias Lindholm
Best Rookie: Adam Ruzicka
Those three were ridiculously easy to choose. Markstrom has started 62 games and is in the Vezina Trophy conversation. Lindholm has 41 goals and is in the Selke Trophy race. And Ruzicka is the only true rookie on the Flames to play significant minutes this season. And now for some of the harder decisions…

Matthew Tkachuk, Lindholm, and Markstrom all got consideration here, but in the end I just couldn’t name anyone other than Johnny the MPV. At 113 points and counting, Gaudreau has put together the second most productive season in franchise history, surpassing Joe Mullen’s 110 points from 1988-89. He’ll finish behind only Kent Nilsson’s 131 points in 1980-81 when it’s all said and done. That in and of itself likely would have been enough.
But it goes beyond that. Gaudreau leads the NHL with 88 even strength points, and by a large margin. 52 of Gaudreau’s 74 assists are primaries, behind only Florida’s Jonathan Huberdeau (53). His 43 primary assists at even strength is tops overall. And at +63, Gaudreau not only leads the league, but he boasts the highest +/- of any player since Wayne Gretzky’s +69 in 1986-87.
As good as so many players have been for Calgary this season, going with anyone other than Gaudreau as MVP would have been overthinking it. 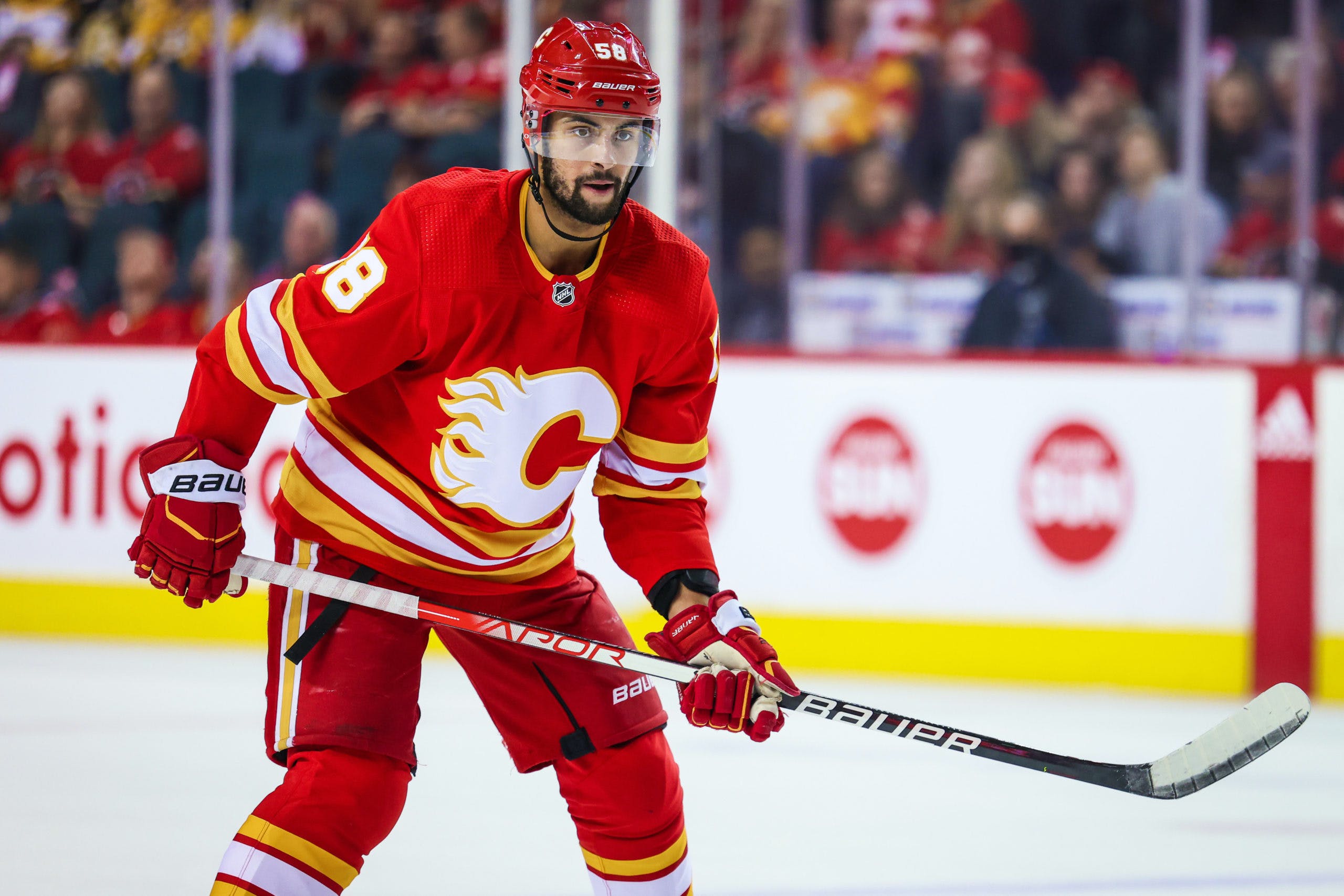 Dillon Dubé threw himself into this mix with the way he’s played over the last number of weeks, but Kylington’s entire body of work made him the emphatic choice as breakout player. For a guy who many, including myself, believed was likely destined for another organization, what Kylington has accomplished this season is stunning. And he deserves so much credit for the transformation.
Kylington’s prior high for NHL games in a season was 48. This year, he’s appeared in 71 and has been firmly entrenched in Calgary’s top four since late October. With nine goals, 22 assists, and 31 points, Kylington has posted career highs across the board and has played a huge role in helping the Flames move on from Mark Giordano without much difficulty at all. 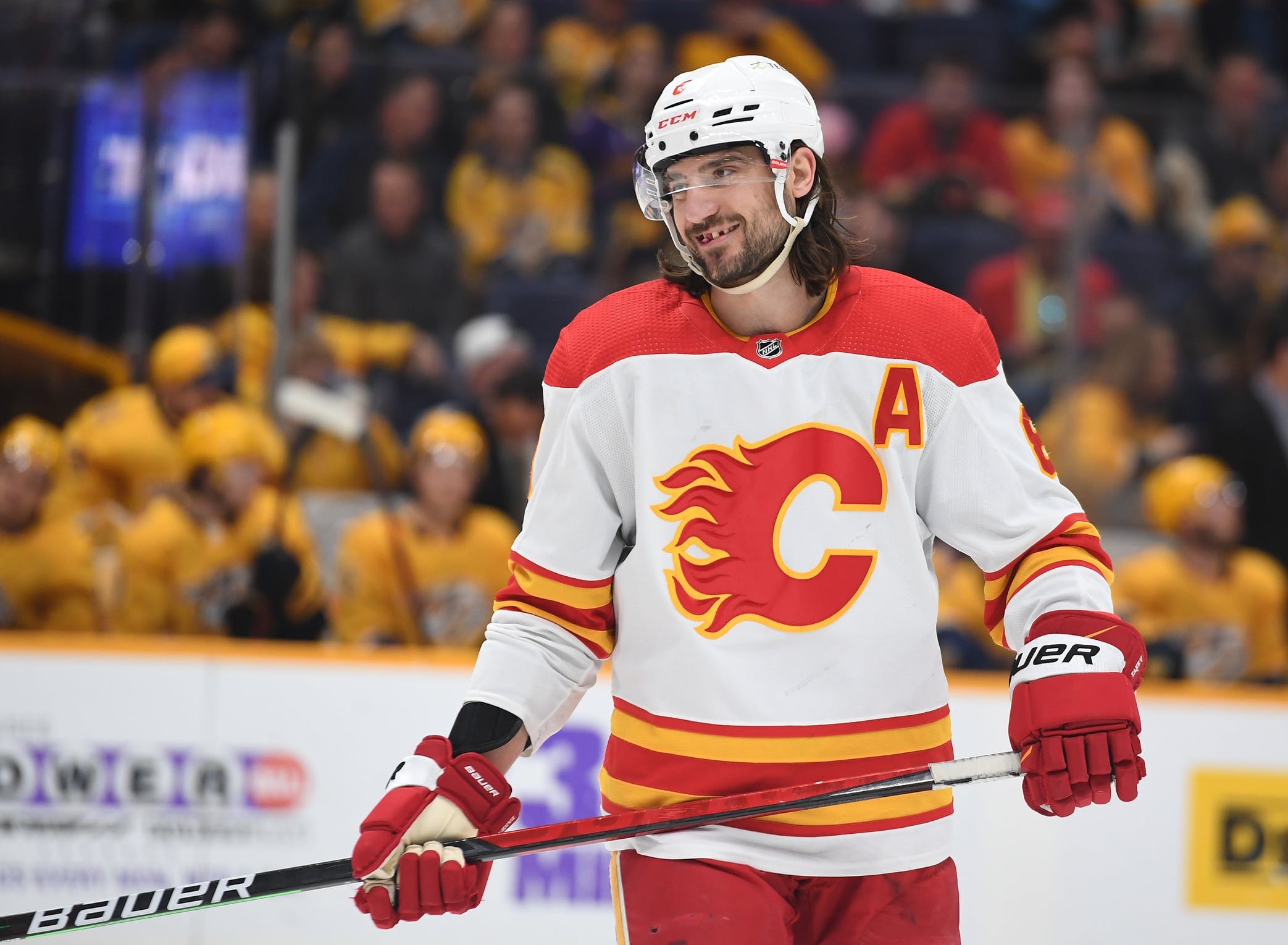 I promised myself I wouldn’t cop out and go with a tie for any of these awards, but goodness was I close. I went back and forth multiple times between Noah Hanifin, Rasmus Andersson, and my eventual choice Tanev because that’s how good all three have been. If you believe it’s one of the other two, you’re probably not wrong, but there were a few factors that gave Tanev the slight edge for me.
First off, he’s been instrumental in helping the prior winner. Paired with Kylington all season, Tanev has been the perfect partner for a young, emerging defenceman. But Tanev has been more than just a good complimentary piece. He leads all d-men on the team with a 56.2% share of expected goals at five-on-five and Calgary has out-chanced the opposition at high danger 265-193 with Tanev on the ice, also best at his position. Underlying metrics courtesy Natural Stat Trick.
When you factor in Tanev’s elite penalty killing, the nod for best blueliner goes to him by the slimmest of margins. 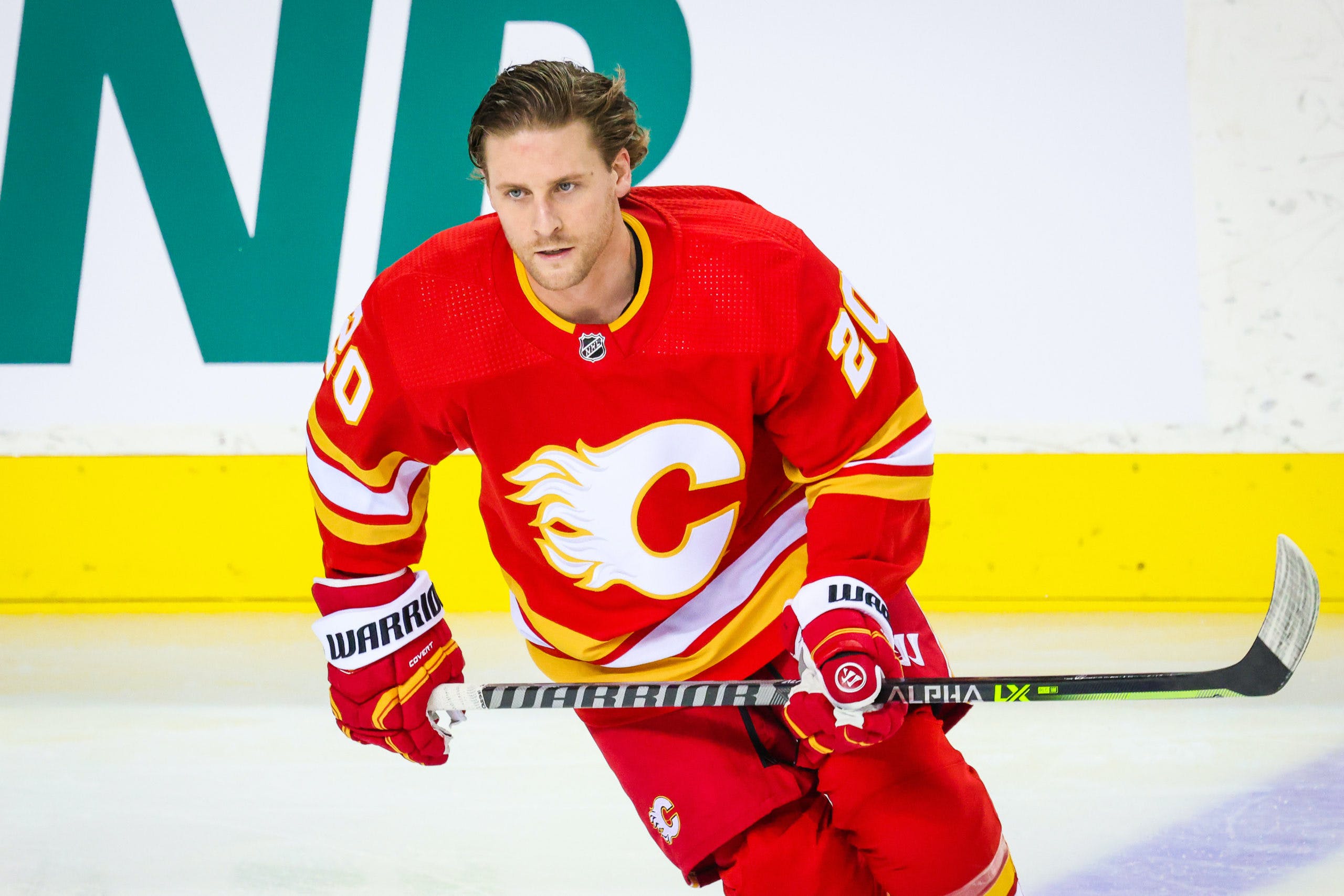 It still baffles me that people were, and in some cases still are, talking about Coleman as a free agent “bust” in year one of a six-year deal signed last summer. For me, nothing could be further from the truth. Coleman has been as advertised in his first season with the Flames and hasn’t even gotten to the time of year he was really brought in for: the playoffs.
Coleman’s offence is right where it has been for most of his career. With 33 points, Coleman is just three shy of his career high of 36 set with New Jersey in 2018-19. With one of the lowest offensive zone start ratios on the team (52.0%), Coleman has been a play driving beast. His 57.3% possession rate, 55.6% high danger ratio, and 55.7% share of expected goals all jump off the page, as does his work on the penalty kill.
I have no idea what Coleman’s contract is going to look like in four or five years. But I do know Coleman’s first season with the Flames has been solid, steady, and effective in his quest for a third consecutive Stanley Cup ring. 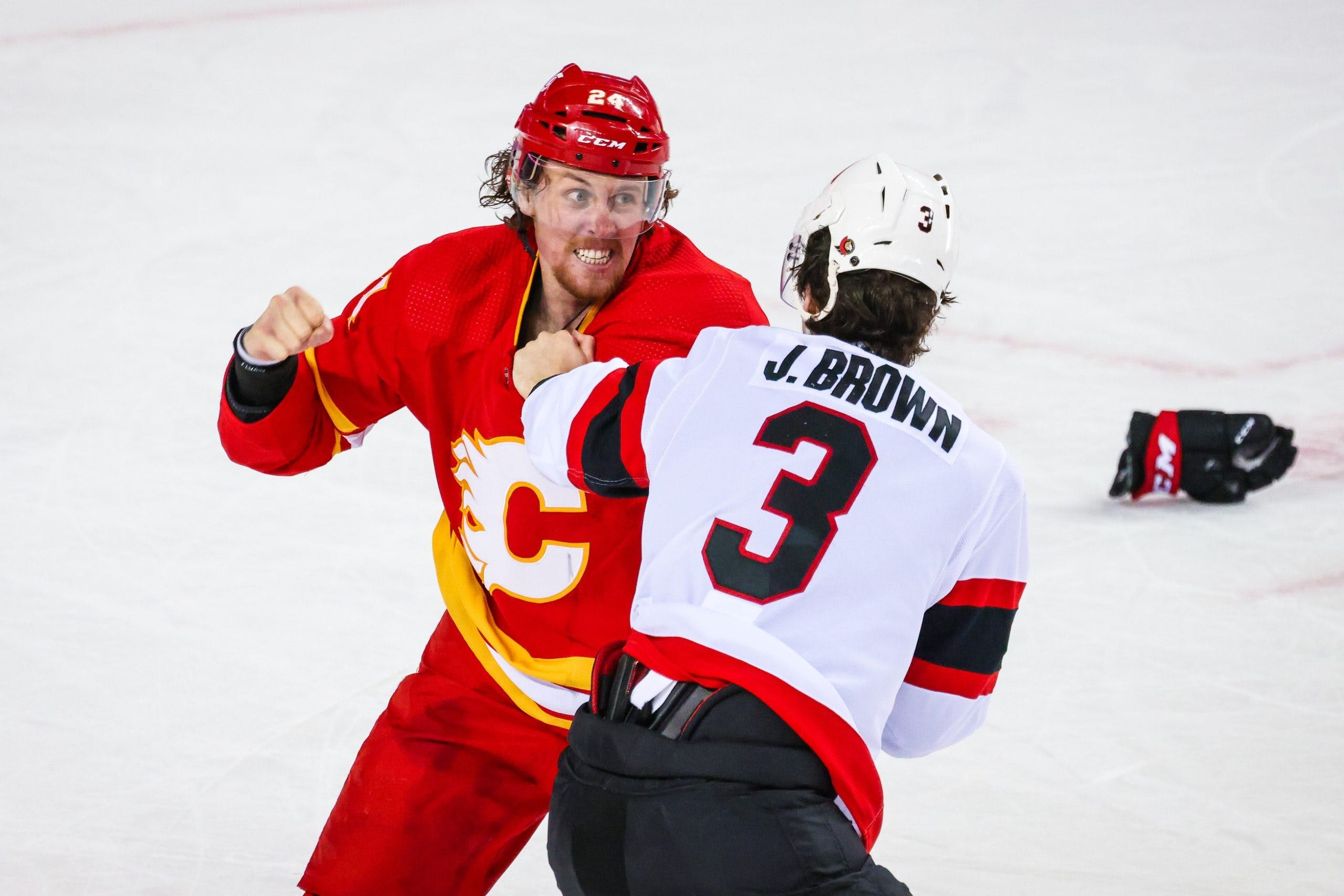 Man do I have a soft spot for this guy. Yeah, Ritchie wasn’t the ideal candidate to be playing on a line with Gaudreau for parts of last season, but that wasn’t his fault. When slotted properly this year, though, Ritchie has been one of Calgary’s best and most effective players relative to his role. In my view, the flak this guy takes online is completely off base.
Amongst regulars, only Tkachuk and Gaudreau have a higher share of five-on-five expected goals than Ritchie’s 59.2%. Not one regular player has been on the ice for a higher rate of high danger chances than his 64.3%. Ritchie doesn’t finish at a high rate, but he makes a big impact in driving play and possession, especially when used appropriately.
Injuries have kept Ritchie from playing more this year. But with his size, skating, strength, style of play, and effectiveness, he has a strong chance of making an even larger impact when the playoffs start next week.