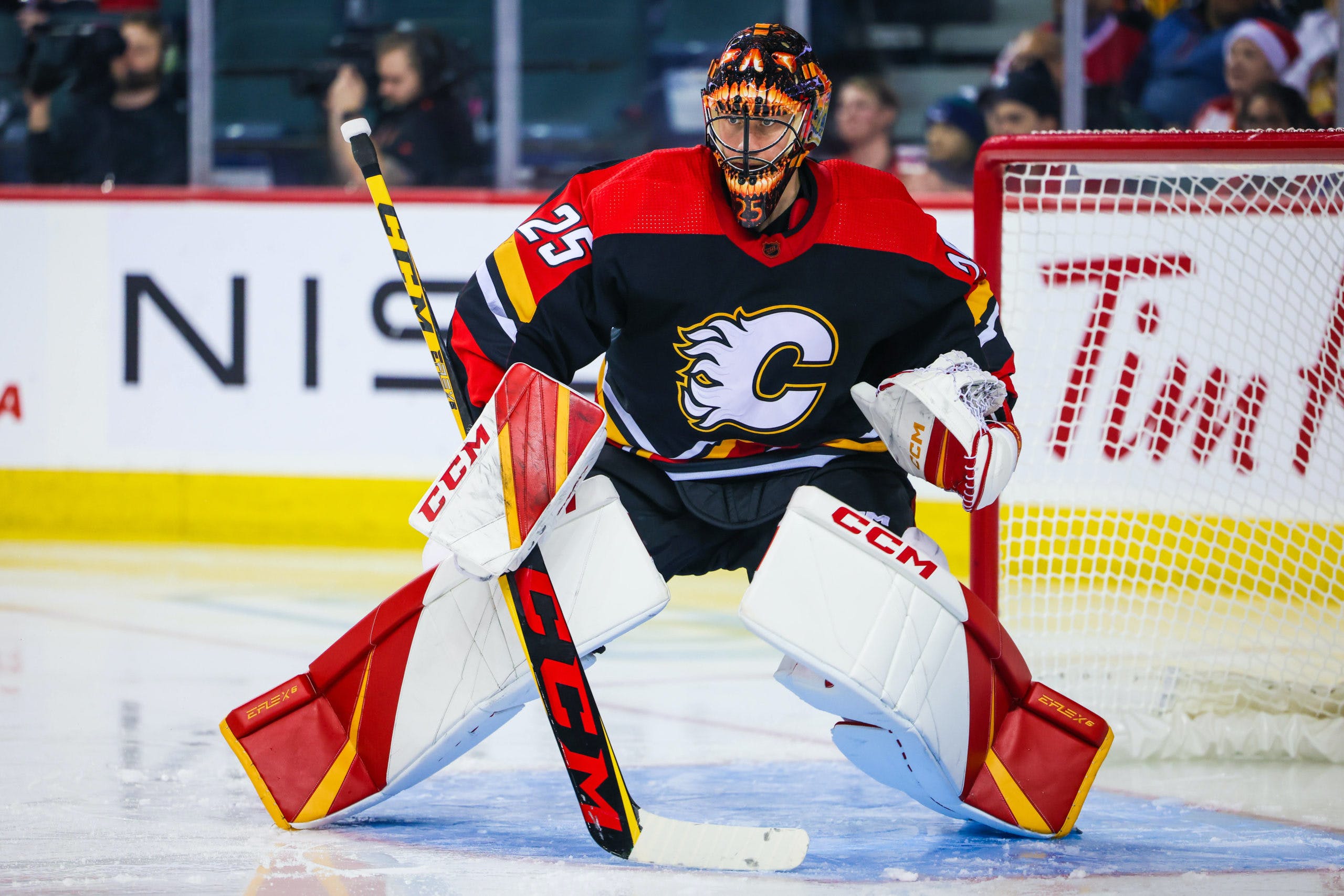 By Robert Munnich
1 month ago
Calgary Flames fans are riding a violent Six Flags roller coaster watching this team right now. They had a big win against the Wild, followed up by their worst effort of the season in Columbus. And then they lose three straight games in extra time. This has been a hard team to get a gauge on. What are they? Flames fans are having a hard time figuring that out.
Let’s dive into the good bad and ugly of games 26-30.

The good news for Flames fans is that it looks like they’re back to getting solid goaltending from Jacob Markstrom and Dan Vladar. And this goes back almost a month. In the Flames’ last 12 games, they rank eighth in the NHL in team save percentage.
In this recent stretch of games, Jacob Markstrom was the Flames best player. He single handily kept them in games against Columbus, Montreal, and Vancouver. His performances, particularly in overtime against the Canadiens and Canucks were exceptional. In his last three starts, Markstrom has a 0.934 save percentage and a 1.96 goals against average. Both are top ten in the NHL during that stretch of games.
It would be massive for Flames playoff push if Markstrom is able to continue this level of play for the rest of the season. Because as we are seeing right now, this team has a hard time generating offence and scoring goals. They need their goalies to be their best players.

The Flames call up reinforcements from the farm

Finally, the Flames have called up Matthew Phillips and Radim Zahorna from the AHL Calgary Wranglers. Fans have been wanting to see this type of transaction from the Flames for weeks. It was clear the fourth line needed some help. Any combination of Milan Lucic, Brett Ritchie, Kevin Rooney and Trevor Lewis was not working.
Zahorna has come in and provided a little more speed and skill to the fourth line. He has shown an ability to use his speed and size to his advantage by protecting pucks and taking them hard to the net. It’s been a small sample size, but Zahorna looks like a guy who can be a solid contributor to the bottom six of the Flames lineup.
Then you have Matthew Phillips. Its fantastic that he was rewarded for is strong play in he American Hockey League with a call up to the NHL. He has only played in two games and did not see the ice much. Because of this, it’s been hard to evaluate him.
He played 12:22 at five on five and 5:40 on the power play in two games. He has shown flashes of what makes him a great offensive player like when he ripped a shot off the post against the Canadiens on the power play.
He has done a good job of getting to the dirty areas, holding his own protecting pucks and playing along the boards. He looks like a guy who deserves more opportunity to show what he’s got at the NHL level.
But the most encouraging thing about this is that the Flames are giving young players in their organization a chance to show what they got in the NHL. If it works, then great. You have found two young, inexpensive players to fill out your roster with. If it doesn’t work, that’s also fine. Then you know that you’ll have to hit the trade market to add to your team. At least you gave young players a chance, which is all Flames fans were asking for.

On Dec. 9, Kelsie Snow announced via Twitter that her husband and Flames assistant general manager, Chris Snow, had to be put on a ventilator due to complications from ALS. Through this incredibly difficult time, the Snow family has shown exceptional levels of courage, bravery, and strength.  They are an inspiration to everyone who has come across their story. We hope and pray that Chris is able to get through these next few weeks and come back stronger than ever. Everyone in the Flames community is behind the incredible Snow family. Our thoughts, prayers and best wishes go out to Chris, Kelsie, Cohen and Willa.

The Flames have taken an extraordinary 26 penalties in their last five games. The crazy thing was that they only allowed three goals against on the penalty kill, all three coming in their game against the Toronto Maple Leafs. This is something the Flames are going to have to clean up. There were a lot of careless high sticking penalties that could easily be avoided with a little players being more diligent with their sticks.
The costliest penalties were the two high sticking calls in overtime against the Maple Leafs and Canadiens. Toronto ended up scoring the game winning goal on their power play. Luckily in Montreal, Markstrom stood on his head helping kill off the Toffoli double minor.
Clean it up, boys.

This has not been the most exciting season of Flames hockey. This is a team that is straight up boring to watch right now. They’re one of the slowest, oldest teams in the NHL. They lack a true star player, let alone a super star. And they’re struggling to generate dangerous scoring opportunities in the offensive zone.
This has been the rule, not the exception for the Flames in the last 25+ years of hockey. Since 1995, the only truly entertaining seasons of Flames hockey was the 04-cup run, the find a way Flames of 2014-15, the 2018-19 division champs, and last seasons squad led by Johnny Gaudreau and Matthew Tkachuk. That’s it. It seems like every other season is just mediocrity.
When will the Flames finally decide on prioritizing speed and skill in their drafting, developing, and player acquisitions via trade and free agency? The rest of the NHL is getting faster, and more skilled while the Flames continue to stay stagnant in that area.
For once I would love to cheer for a team that is fast, skilled, fun, and entertaining. Is that too much to ask for?

I want to preface this by saying this is not a criticism of Connor Mackey, but rather hockey culture.
Connor Mackey got back into the Flames lineup against the Montreal Canadiens as a replacement for MacKenzie Weegar who was out with an illness. It was Mackey’s first game back with the big club in a month. Because of this, Mackey knew he had to make an impression and get noticed. He decided to drop the gloves in a meaningless scrap against a more skilled fighter in Michael Pezzetta. Mackey got hit hard in the face multiple times, to the point where his legs almost fully gave out on him.
I understand why Mackey took the fight and I don’t blame him for doing so. Everyone in the hockey establishment would applaud Mackey for taking on such a tough customer. People have said that management, the coaches, and his teammates will appreciate that. But why? What did that fight accomplish? All it did was endanger the health of Mackey.
The fight wasn’t him standing up for a teammate. It wasn’t two emotional players coming to blows. It was a fight for Mackey to get noticed by the organization. That is just plain wrong. Mackey should get noticed for playing good, low risk, defensive hockey. Making great outlet passes. Winning puck battles. Playing physical. Those are things an up-and-coming player should do to get noticed. Not risk his health in a fight to appease hockey men.
This is a part of the game I would like to see eradicated. The staged, meaningless fight that has zero impact on the game, but makes coaches and managements ears perk up when it happens. It needs to stop.
What was your good, bad and ugly for the Flames in their last five games? Let us know in the comments section!
Editorials
Recent articles from Robert Munnich