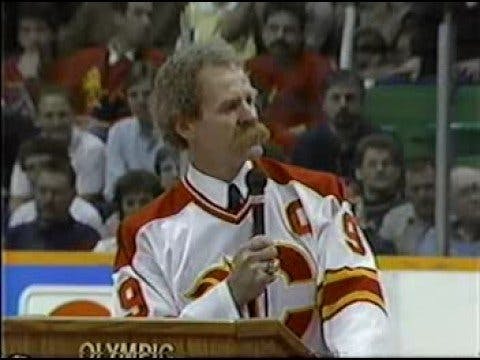 By Zach Laing
1 year ago
Welcome back to another edition of Throwback Thursday!
This week in 1990 (March 17), the Calgary Flames retired Lanny McDonald’s No. 9.
Less than a year after he helped lead the Flames to its lone Stanley Cup championship, Lanny’s jersey was the first ever lifted to the rafters of the Saddledome and it was that was for nearly twenty years.
Acquired by the Flames in 1981, McDonald played 492 games over eight years for the team scoring 215 goals and 191 assists over that time. That, all the while, piling up 408 PIM with the team.
That night Lanny got a standing ovation from the fans in the stands as he and his family were welcomed to the ice and was presented with a gold hockey stick. Flames captain Brad McCrimmon gave Lanny his No. 9 jersey to put on one last time in front of the sold out crowd.
You can see some of the ceremony below.
Zach Laing is the Nation Network’s news director and senior columnist. He can be followed on Twitter at @zjlaing, or reached by email at zach@oilersnation.com.
Uncategorized
Recent articles from Zach Laing