Welcome back to the Elias Lindholm debate 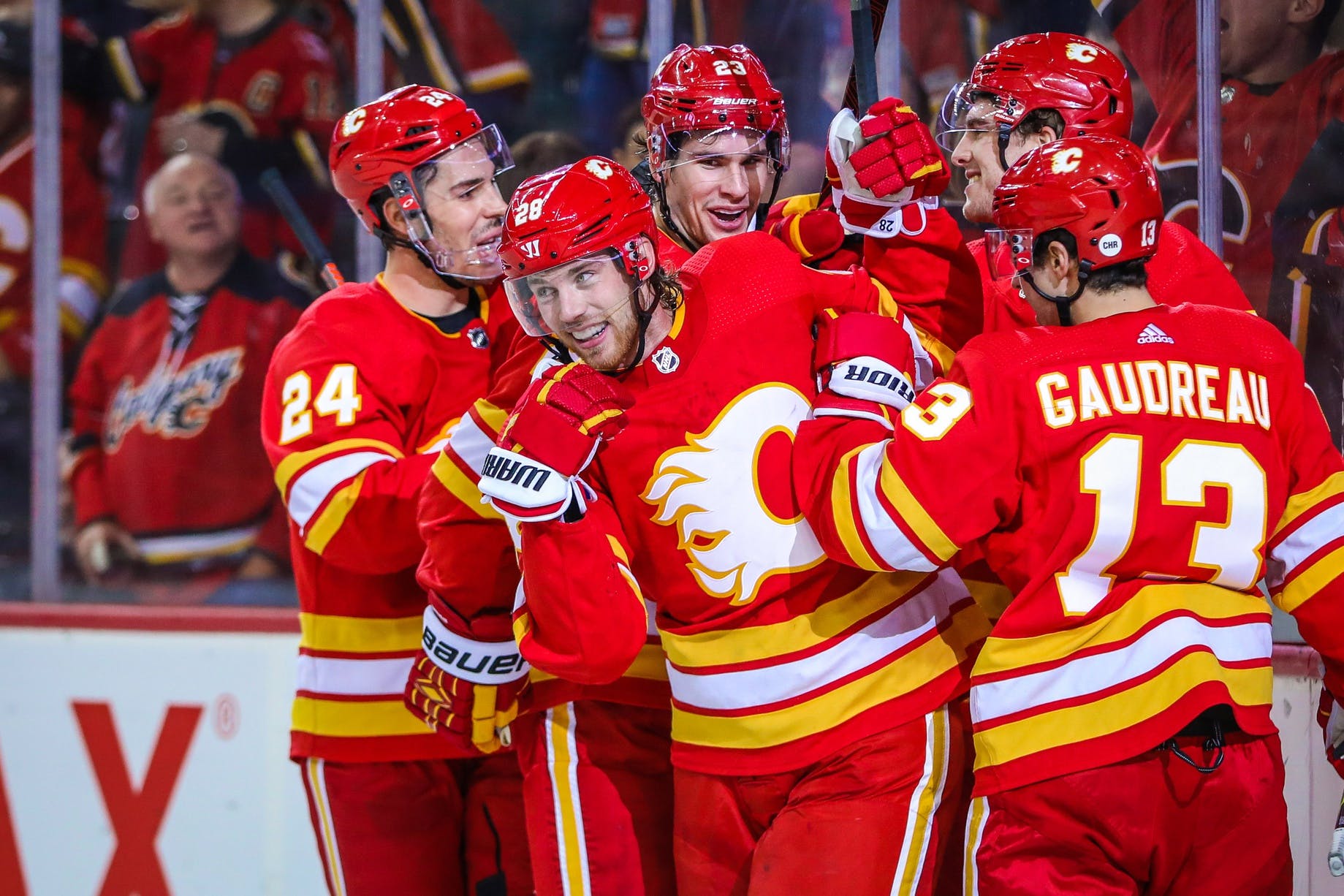 By Pat Steinberg
1 year ago
After a frustrating 9-10-2 start, the Flames moved Elias Lindholm from centre back to the right side of Sean Monahan and Johnny Gaudreau on Saturday afternoon. Calgary’s pivot back to August’s “bubble lines” paid off quickly, too: they took a convincing 6-3 win over the Ottawa Senators. I have been, and remain, a staunch believer in Lindholm down the middle long term. I also realize, however, it’s not quite that simple with how this team is constructed and how they’ve performed.

The benefits: Lindholm is an effective two-way player and, in my opinion, the team’s best option to fill the role of “number one” centre. Monahan is a solid offensive weapon but isn’t effective at driving play and struggles defensively. Mikael Backlund has great two-way game when he’s on but lacks true high-end offensive upside. Lindholm blends both worlds and his underlying outputs have been strong this year. Underlying stats courtesy Natural Stat Trick.
Lindholm’s results haven’t been at the same level as, say, Barkov, Bergeron, Trocheck, or Marchessault…but they’ve still been solid. Lindholm ranks in the top tier in all of the categories above, which means he’s been one of Calgary’s most productive five-on-five players despite facing the toughest matchups every night with significant defensive responsibility. There’s a great deal of value in what he has accomplished.
The downfalls: The Flames are significantly thinner at right wing without Lindholm there. Knowing they wanted to move Lindholm to the middle, Calgary signed Dominik Simon and Josh Leivo in the offseason with an eye to help fill that void. The experiment hasn’t come close to working through 21 games.
That fact has specifically hurt the Monahan-Gaudreau pairing, with the latter admitting on our postgame show Saturday it has been tough to find chemistry this season with anyone on the right side. We’ve seen Simon, Leivo, Sam Bennett, and Andrew Mangiapane all get looks without clicking. Yes, Lindholm has been good at centre on a line with Tkachuk and either Mangiapane or Dillon Dube. Unfortunately, though, the line he left hasn’t been as good without him. 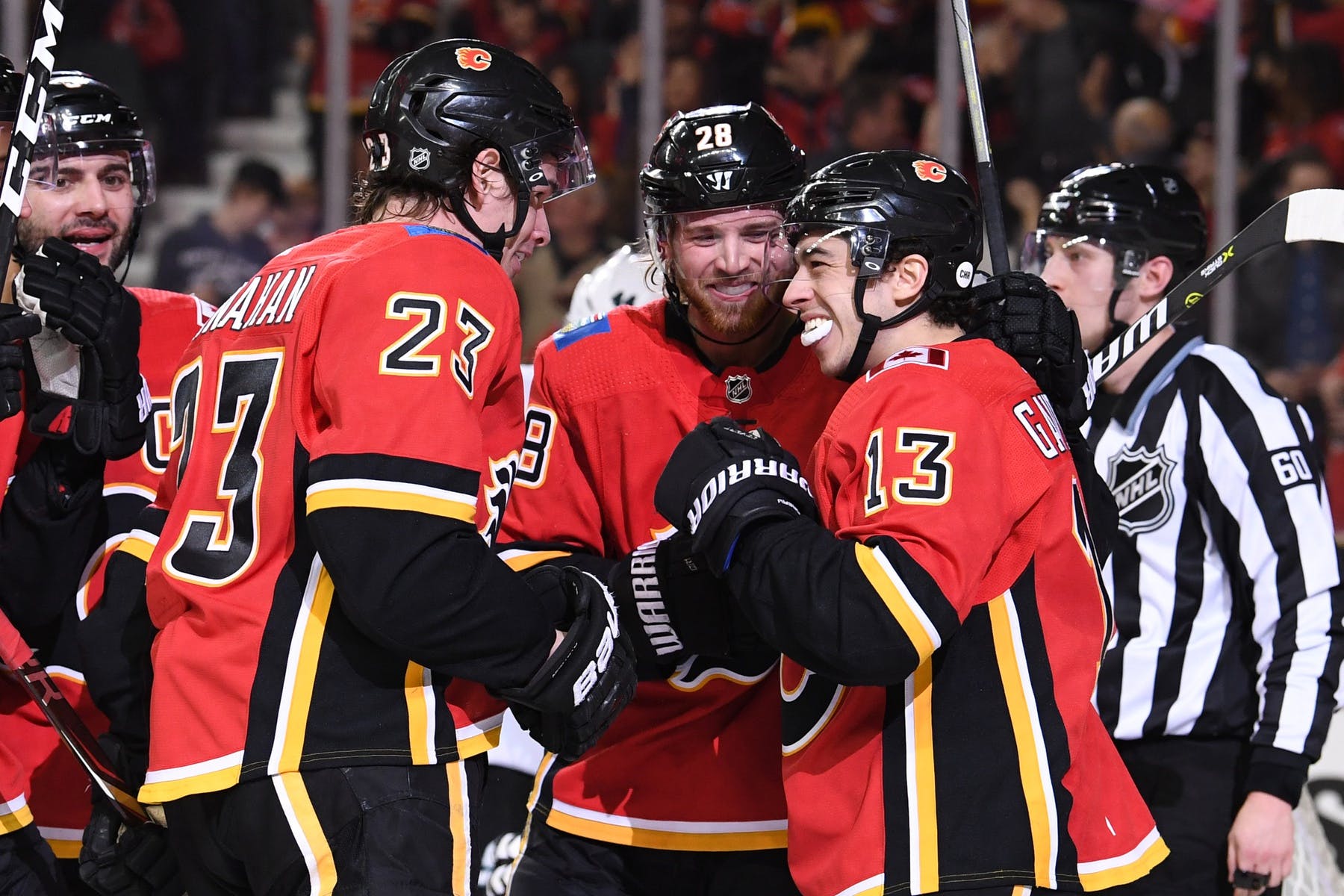 The benefits: Lindholm is the best right winger we’ve ever seen play with Gaudreau and Monahan. No offence to Jiri Hudler, but Lindholm adds an element no one else has to date. He’s on the same level offensively as Monahan and Gaudreau, which is great. More importantly, Lindholm’s two-way game doesn’t force Calgary’s coaching staff to consistently shelter the line.
A secondary benefit is the team’s ability to reunite the effective line of Backlund, Mangiapane, and Tkachuk. At their peak last February and March, that unit was one of the two or three best in the NHL. At the same time, Bennett is open to slide back with Dube and Milan Lucic on a line that was very strong for the Flames in the 2020 playoffs.
The downfalls: When it has mattered the most, Calgary’s top trio of Lindholm, Monahan, and Gaudreau haven’t gotten it done. A lot of criticism has been thrown at the latter two for lack of postseason success, and rightfully so. But in 15 playoff games with the Flames, Lindholm has a grand total of two points at even strength. In a long playoff series, opposing teams have been able to effectively neutralize the line, which has wiped out any potential depth advantage for Calgary in the process.
In the bigger picture, it’s my belief the Flames will have trouble getting to the next level without a true number one centre. I still think Lindholm has the ability to be that guy, or to at least fill the role admirably. Lindholm has been strong in two different extended stints down the middle. Unfortunately, a lack of right wing depth has prevented it being a permanent thing thus far.

Overall, I believe Lindholm at centre is Calgary’s best option in building a winning roster. Short term, though, the supporting cast hasn’t been consistently good enough for the Flames to keep Lindholm at centre. I fully understand why they made the change Saturday afternoon, and it probably makes sense to keep Lindholm at right wing for the time being. After all, the team has to get to the dance before thinking about how they matchup in the playoffs.
As it stands, Calgary’s drop-off on the right side feels way bigger minus Lindholm than it does when he’s not playing centre. That said, the hole on the wing is something the Flames have to address sooner rather than later. Once they do, maybe Calgary can finally move Lindholm to the middle once and for all.
Uncategorized
Recent articles from Pat Steinberg