Where does Johnny Gaudreau fit in pantheon of Flames franchise greats? 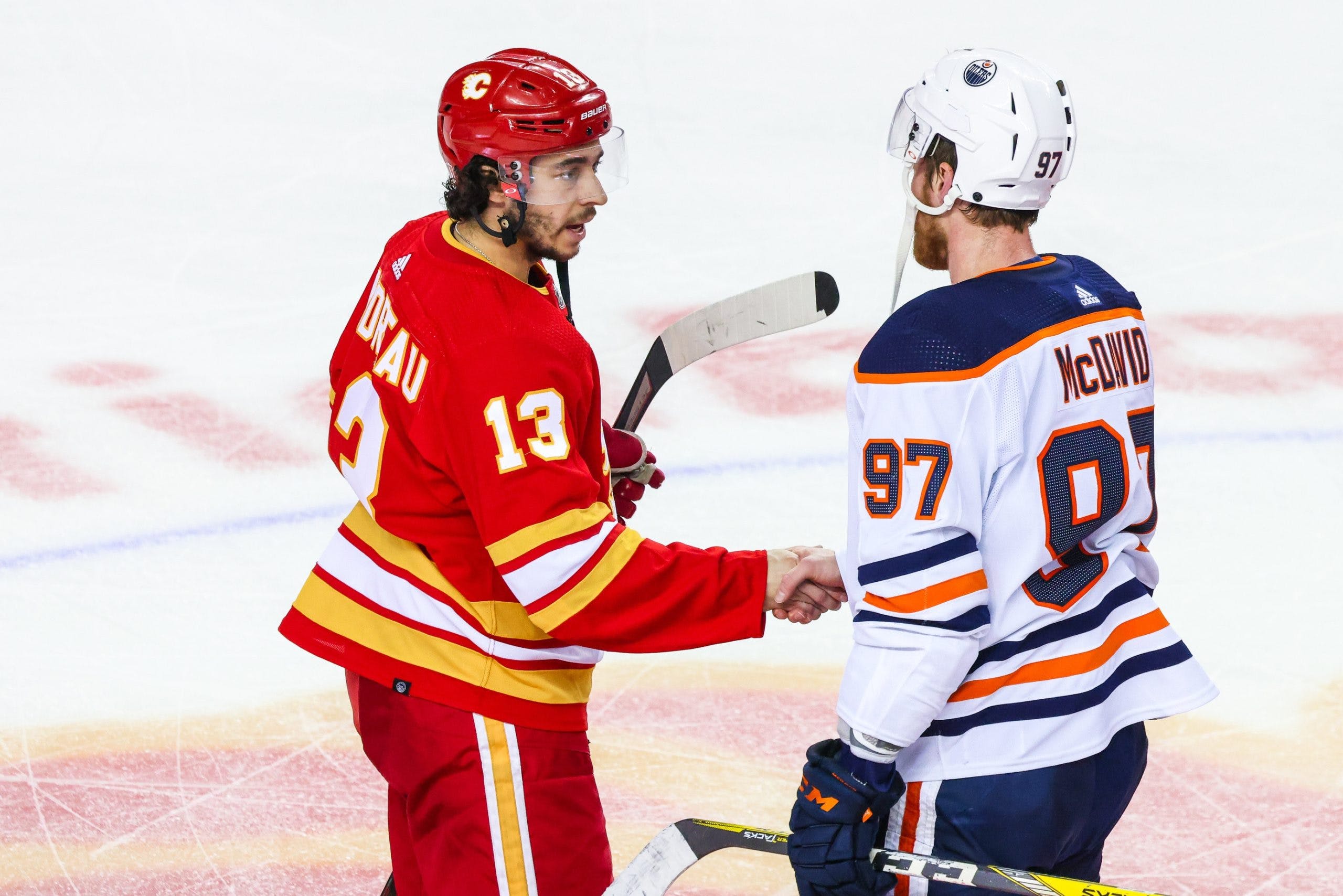 By Ryan Pike
1 month ago
Since his debut in the National Hockey League on April 13, 2014, Johnny Gaudreau has played 627 regular season games against 31 clubs. On Friday night, he’ll play his first game against the team that drafted him, the team he played 602 games over eight seasons for: the Calgary Flames.
As Gaudreau prepares to play his first game against the Flames, it’s probably a good time to consider his legacy with that franchise.
Gaudreau was the Flames’ fourth-round selection in the 2011 NHL Draft. That class was the first under Jay Feaster and featured five selections. All five managed to play NHL games. The other four were Sven Baertschi, Markus Granlund, Tyler Wotherspoon and Laurent Brossoit. They’ve combined for 763 NHL games and 245 NHL points – 182 games and 61 points combined with the Flames.
But the star of the draft class for the Flames, and one of the biggest late-round gems in recent draft history for any club, was Gaudreau.
Having covered Gaudreau’s entire Flames run dating back to his first development camp in 2011 – spoiler alert, I’m getting old – he’s probably the most dynamic player I’ve covered on a regular basis, and probably on the Mount Rushmore for most offensively talented players in franchise history along with the likes of Kent Nilsson and Theo Fleury.
Discussions of Gaudreau’s Flames legacy probably need to be split into regular season and playoff excellence.
In the regular season, he was one of the best Flames of all-time. He had six hat tricks, tied with Hakan Loob for seventh in club history. He was 12th in games played with 602, ninth in goals with 210, fifth in assists with 399, and fifth in points with 609. The list of players with more regular season points wearing a Flames jersey is short: Jarome Iginla, Fleury, Al MacInnis and Joe Nieuwendyk.
In terms of hardware, he won a Lady Byng, and was voted to the NHL’s All-Rookie and First All-Star Teams during his career. He finished fourth in Hart Trophy balloting twice.
He was a huge part of a lot of really big regular season moments, including his first career hat trick in a comeback win over the Kings.
But, as his most vocal critics will point out, the difference between being considered a very good Flame and being a legendary Flame is determined by playoff success. Why does everybody remember Miikka Kiprusoff and Jarome Iginla? The 2004 Stanley Cup run, with Kiprusoff’s heroics and Iginla’s performance in moments like “The Shift.” Heck, Lanny McDonald cemented his legend with a goal in the Cup-winning game in 1989 – along with that iconic photo of him cradling the Cup after the game.
In eight seasons in Calgary, Gaudreau only made the playoffs five times. And he only advanced past the first round twice. Despite being a point-per-game regular season player, his production dropped significantly in the playoffs. He was responsible for some post-season heroics with his overtime Game 7 winner against Dallas in the first round last spring.
But beyond his superb play against the Stars, Gaudreau unfortunately faded into the background a bit in the other playoff encounters he was involved in. (That’s not to say he was bad or a liability, but he wasn’t nearly the difference-maker that he often was in the regular season.)
When you think of the most significant members of the Flames franchise, you’re probably thinking of players that were part of the club’s runs to the Stanley Cup Finals in 1986 or 2004, or their Cup win in 1989. And yeah, it’s probably fair to note that the ’80s teams had the benefit of some really stacked rosters (and no salary cap).
But despite his regular season excellence, Gaudreau’s Flames resume unfortunately is a bit lean on playoff success. He’s one of the best players of the Lockout Era Flames, but he likely resides on the second rung of the ladder of truly iconic Flames.
Where do you place Gaudreau within the heirarchy of great Flames players? Is Ryan being too hard on him for his lack of post-season success? Sound off in the comments!
Editorials
Recent articles from Ryan Pike