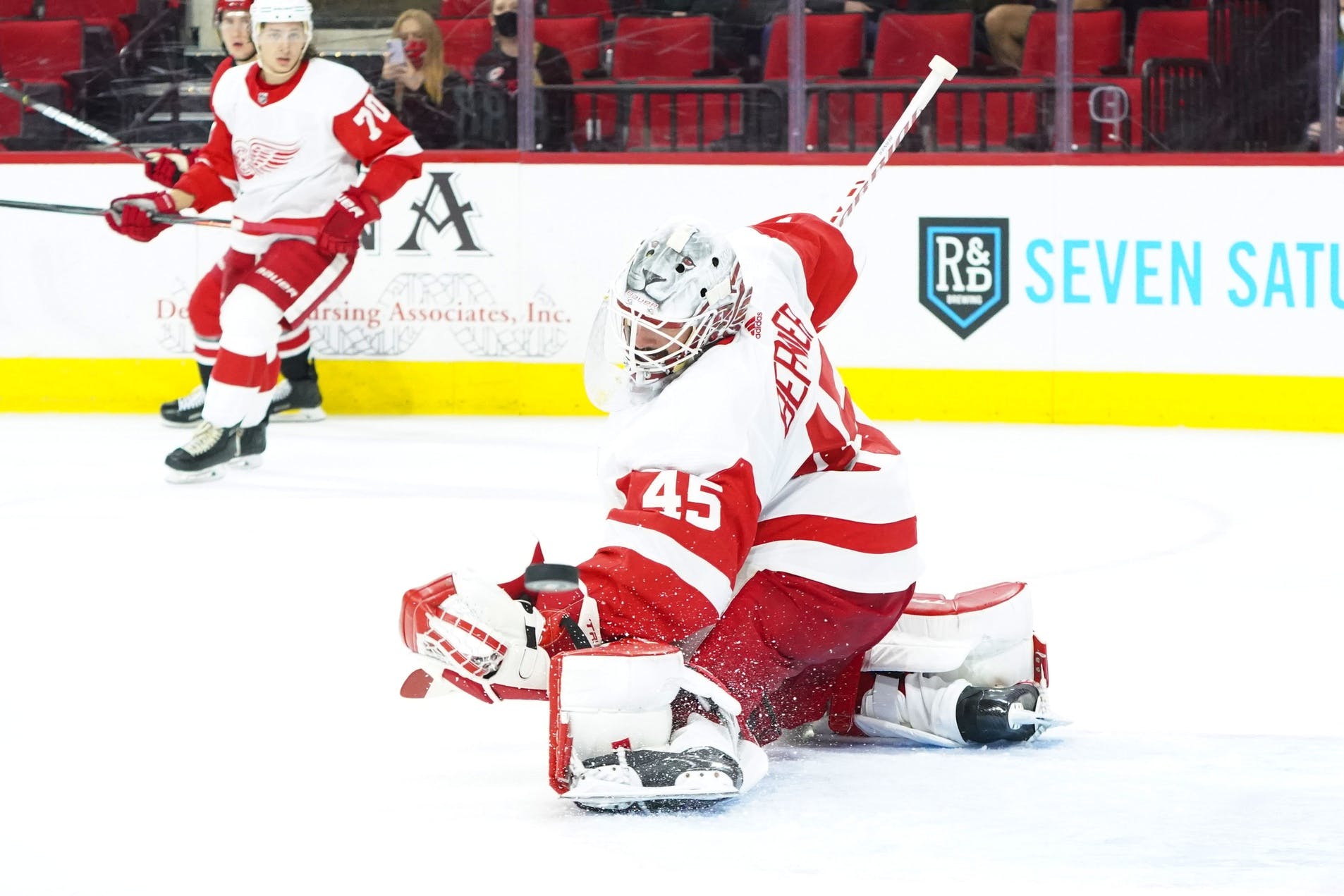 By Mike Gould
1 year ago
Jacob Markstrom played a lot of hockey in the 2020–21 season.
The 31-year-old goaltender played nearly as much hockey during the shortened 56-game schedule as he did with the Vancouver Canucks in 2019–20. Markstrom suited up for 43 of Calgary’s 56 games, including a stretch of 15 consecutive appearances between Apr. 5 and May 16.
After David Rittich was traded to the Toronto Maple Leafs on Apr. 11, Markstrom played all but one of the Flames’ remaining contests. He battled the first concussion of his career during the season and missed two weeks in late February and early March as a result.
Flames head coach Darryl Sutter has previously shown an extreme willingness to bestow a heavy workload upon his number-one goaltenders.
During his first stint in Calgary, Sutter played Miikka Kiprusoff 74 times the 2005–06 season. Jonathan Quick made 72 appearances for Sutter’s Los Angeles Kings during the 2014–15 season and played 68 games in 2015–16. Evgeni Nabokov played 66 games for the San Jose Sharks under Sutter’s tutelage in 2000–01 and 67 in 2001–02.
In the event Markstrom remains largely healthy for the duration of the 2021–22 season, Sutter will likely continue to heavily rely upon the big Swede to stop pucks for his team.
However, every NHL team needs at least two goaltenders on its roster at all times. Markstrom, signed for five more years with a no-movement clause on his contract, is all but guaranteed to be one of them. Who will be the other?
Let’s take a look at some of the potential choices, starting with those currently in the organization.

At this moment, the Flames have two goaltenders signed for the 2021–22 season. One is Jacob Markstrom. The other is Dustin Wolf.
Wolf, 20, already has three American Hockey League games under his belt and will be eligible to join the Stockton Heat next season on a full-time basis. He allowed six goals on the first 12 shots he faced with Stockton but rebounded in a big way, stopping 62 of the final 64 directed at his net before returning to the Western Hockey League.
In 22 games with the Everett Silvertips this season, Wolf posted an absurd 18-3-0 record to go along with four shutouts and a .940 save percentage. He finished his WHL career only two shutouts shy of Carter Hart’s all-time Canadian Hockey League record of 26; Hart, who also starred in Everett for his entire junior career, played 190 WHL games to Wolf’s 149.
Nevertheless, it’s unlikely Wolf gets into any NHL action for a couple more years. While Hart played 31 NHL games at age 20, such a feat is extremely rare among goaltenders.
Spencer Knight turned 20 the day before he made his NHL debut this season. The former first-round pick was the youngest goaltender in the league this year and played just six games for the Florida Panthers between the regular season and playoffs.
Wolf likely gets the lion’s share of the starts in Stockton next season; Tyler Parsons and/or Artyom Zagidulin could join him. Both goaltenders are pending restricted free agents coming off uneven seasons with less playing time than normal.
Zagidulin, 25, earned his first 28 minutes of NHL action during a lopsided loss to the Ottawa Senators on Feb. 25, allowing two goals on 11 shots. He played just six games in Stockton in 2020–21, posting a 3-3-0 record to go along with a .911 save percentage. Zagidulin has been a decent AHL goalie in his two years in North America but could opt to return to Russia for more playing time.
Parsons’ season was one to forget. The 23-year-old missed the first two months of Stockton’s campaign while rehabbing an ankle injury, finally returning to the lineup against the Manitoba Moose on Apr. 22. Parsons allowed five goals on 25 shots in a 5-2 loss before coming down with a case of food poisoning and missing the rest of the season.
Both Parsons and Zagidulin still have lots to prove before they can be considered NHL options. Calgary also has Louis Domingue, a 29-year-old pending UFA who made one NHL appearance this year to go along with three for the Heat. The veteran of five NHL teams failed to impress at either level and is unlikely to be retained.

On the UFA market

Here’s a quick breakdown of some of the most likely targets projected to be available to the Flames on the UFA market this coming July. This list does not include the likes of Fredrik Andersen, Petr Mrazek, Chris Driedger, and Philipp Grubauer, all of whom are probable to be signed as a team’s starting goaltender.
Jonathan Bernier turns 33 in August and is coming off a largely successful three-year stint with the Detroit Red Wings. Granted, the team wasn’t very good, but Bernier put up solid individual numbers during his tenure and stopped 1.80 goals above expectation (GSAx) in the 2020–21 season (according to Evolving-Hockey).
Antti Raanta spent the past four seasons playing with the Arizona Coyotes. He just turned 32 and missed the majority of the 2020–21 season while dealing with a variety of injuries. Raanta has been an excellent Coyote when he’s played, amassing 28.17 GSAx over 104 games in Arizona, but his long injury history is undoubtedly a concern.
The Carolina Hurricanes acquired James Reimer from the Florida Panthers in 2019. Reimer has been dependable in Raleigh, stopping 7.63 more goals than expected in 2019–20 before going into the red by 2.70 (while posting a .906 save percentage) in 2020–21. With a long track record of being a competent tandem and backup option, the 33-year-old Reimer could be a reasonable option.
A large segment of Flames fans will recoil at the mention of Mike Smith, whose .898 save percentage and shoddy puck-handling in the 2018–19 season cost that team more than a few games. Smith moved to Edmonton for the 2019–20 season and returned in 2020–21, defying the odds and compiling some genuinely good numbers in the latter campaign. The Oilers earned a playoff berth in 2021 in no small part due to Smith’s .923 save percentage and his 7.22 GSAx. Still, he’s 39 and looked very much like his 2018–19 self on multiple occasions during the 2021 playoffs. It might be best to shy away.
David Rittich formed a tandem with Smith in 2018–19 and was, by far, the better option of the two for much of the year. However, Rittich has never had a positive GSAx season in his career and is coming off a year where he allowed 6.41 more goals than expected in just 19 games. He’ll turn 29 in August and has obvious ties to Calgary but might hold out for an opportunity where he gets more playing time. We already saw how little Rittich played behind Markstrom this past year.
Curtis McElhinney coming full-circle with a return to Calgary would make for a neat novelty. In reality, McElhinney’s numbers have really tapered off in Tampa after excellent stints with Toronto and Carolina. The 38-year-old netminder allowed 13.40 goals above expectation in just 12 games this season and posted an .875 save percentage. It’s possible McElhinney is out of the league entirely by this time next year.
Jonas Johansson makes for a very interesting case. He’s only 25 but will become a Group 6 unrestricted free agent this summer, making him eligible to sign with any team. He started the year in Buffalo and played quite poorly, losing six consecutive games and posting an .884 save percentage. The Sabres traded Johansson to Colorado in March and he started slightly rounding into form, winning five of his seven decisions while stopping 91.3% of the shots he faced. Johansson still allowed 2.30 more goals than expected in his eight games with Colorado but appears to have some runway ahead of him.
The Flames should shy away from Devan Dubnyk. The 35-year-old goaltender also became a member of the Avalanche around the trade deadline but has fared worse than Johansson in the games since, recording an .886 save percentage in five appearances while allowing 3.52 more goals than expected. Dubnyk has been floundering for years, having bled goals above expectation in his final five years with the Wild and continuing to do so in his 17 games with the San Jose Sharks.
Jaroslav Halak has long been a very good NHL goalie. Now 36, Halak is coming off a pedestrian year where he went 9-6-4 in 19 games and paired a .905 save percentage with a -7.36 GSAx figure. 2020–21 marked only the third season of Halak’s long career where he finished in the negatives for GSAx. Is age finally catching up to the two-time William M. Jennings Trophy winner? It can’t hurt to give him a low-commitment contract to find out. If he were to rebound in Calgary, he could very easily push Markstrom for a larger share of the starts.
Carter Hutton was once an excellent backup goaltender with the St. Louis Blues. He then agreed to a three-year, $8.25 million deal with the Buffalo Sabres in 2018 and quickly fell off the map, allowing 34.41 more goals than expected over 94 games. Hutton is now 35 and his .931 season with the Blues in 2017–18 feels like a very distant memory. There will be better options out there.
Finally, there’s Laurent Brossoit. A former Flames draft pick, Brossoit was traded to Edmonton in the Ladislav Smid deal and eventually signed with the Winnipeg Jets as a free agent. The 28-year-old has turned into a very reliable backup behind Connor Hellebuyck, posting a .918 save percentage in 14 games this year while stopping 0.42 more goals than expected. Perhaps Brossoit views himself similarly to Driedger, who will almost certainly seek out a tandem or starting role outside of Florida, but it’s also possible he agrees to a deal enabling him to continue in a backup role.
Uncategorized
Recent articles from Mike Gould