Will Matthew Coronato want to sign with the Calgary Flames? 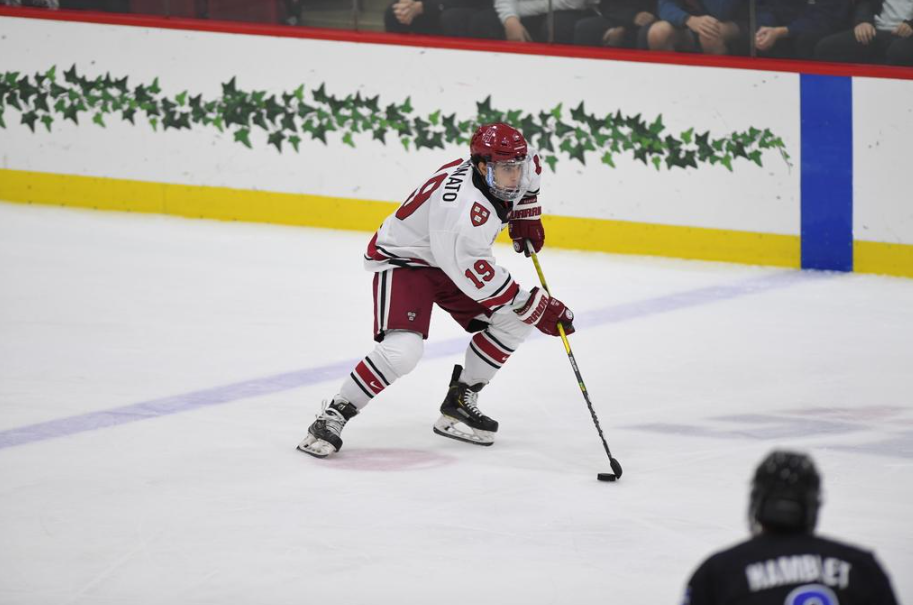 By Robert Munnich
3 days ago
One of the most important pieces of business the Calgary Flames have to get done this season is signing their 2021 first-round pick Matthew Coronato to an entry level contract. He is arguably the best prospect in their system and should be a major part of the team’s future moving forward.
The question now becomes what is Coronato going to want to do at the end of his sophomore college season?
Coronato signing with Calgary this spring would be the best-case scenario for the Flames organization and their fan base. Coronato has been great for the Harvard Crimson. He was over a point per game player as a freshman putting up 36 points in 34 games. He has continued his strong play this season with 21 points in 19 games and was named as a nominee for the Hobey Baker Award, given to the top men’s hockey player in the NCAA.
Coronato also put on a show at the 2022 World Junior (summer) tournament. He was arguably the best player on a deep United States team putting up 7 points in 5 games.
He is very close to being ready, if not ready for the NHL right now. Because of this, it is critical to get him signed.
One thing getting in the way of him signing might be the way Darryl Sutter has treated young players in the organization this season. Sutter has been steadfast on having veterans in his lineup even though younger, smaller players with the AHL’s Wranglers have had great seasons like Matthew Phillips, Jakob Pelletier and Connor Zary.
Phillips is leading the AHL in goals and is third in points despite only playing in 32 games, 3-6 games less than the majority of scoring leaders in the AHL. He only played in two games for the Flames with a total 18:04 in ice time.
Pelletier has 34 points in 31 games with the Wranglers. He has only been able to get in one game playing a grand total of 6:50 despite being on the NHL roster for seven games.
Sutter has continued to rely on veteran players in his lineup who frankly are not getting the job done right now.
On top of all that, he consistently preaches to the fans and media that young, small players will struggle playing at the NHL level. Even though we’ve seen examples across the league of that not being the case such as Cole Caufield, Alex Newhook, Peyton Krebs, Kailer Yamamoto and others.
From Coronato and his advisor’s perspective, seeing what has gone on this season with the Flames and how they have treated younger, smaller players in their prospect system, you have to wonder if he’s considering heading back to Harvard for his junior and potentially his senior season.
He could sign with the Flames this spring. The problem with that is now he is only two years away from graduating with a degree from the most prestigious university in the United States and becoming a free agent in the NHL. That is a pretty enticing option for the 20-year-old.
If Coronato does sign this season, will he get the chance to play consistently in the NHL within the next two years? Will Sutter’s philosophy and stubbornness when it comes to young players prevent Coronato from achieving his goal of playing in the NHL in the short term?
Sutter is under contract until the end of the 2024-25 season. That lines up with Coronato finishing his senior year in college. If Coronato wanted to, he could play two more seasons at Harvard, graduate with a degree, and become a free agent where he would have the ability to choose where he wants to start his career. That is the worst-case scenario for the Flames and their fans. But it might be a logical solution for Coronato.
There would likely be 31 other teams across the NHL who would love to give Coronato a shot to play in the league right out of school. Sutter and the Flames might be the one team to prevent him from doing that.
Sutter and the Flames need to start being a lot more careful about their public perception on how they treat prospects in their system. If they continue to go down this road, it could potentially cost them someone like Coronato.
Editorials
Recent articles from Robert Munnich