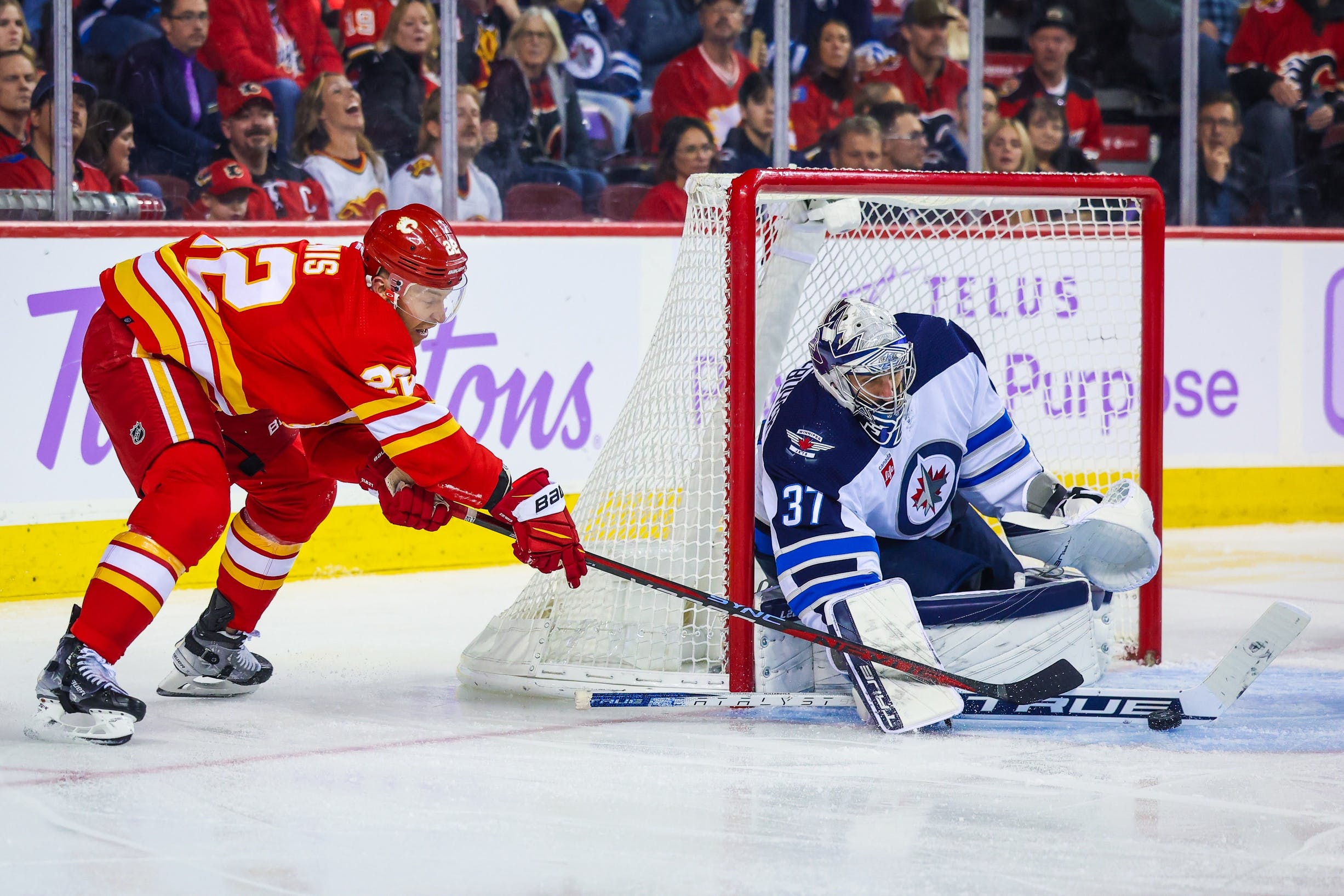 Photo credit: Sergei Belski-USA TODAY Sports
By Shane Stevenson
9 days ago
Comments
Some games you get half the roster to show up – you always hope that it’s the half of your roster that can score goals. For the Calgary Flames it was that half on Saturday night, riding the top 2 forward groupings strong play to a 3-2 victory. That being said the other half of the Flames roster looked like peewee kids defending an NHL all-star team. They couldn’t defend, check, make a play, or even get a bounce. Thankfully for them Jacob Markstrom was ready and able to posterize the Jets and outduel early Vezina candidate Connor Hellebuyck.
CF% – 51.73%, SCF% – 48.16%, HDCF% – 43.12%, xGF% – 41.71%
Advertisement
Ad
Advertisement
Ad
It’s a Team Game – As an overall team they played a stronger more dangerous game against Boston, and yet look which game they get two points in. I wouldn’t say this game was particularly one-sided, but the Jets got the better looks and a decent amount more of them than Calgary got. The Flames defence gets so easily turned around on the rush against the opposition’s top players, nothing like what was employed last year. Many would strike that odd seeing the only change on paper was upgrading Gudbranson to Weegar, but the forwards not being in the right spot for support or for an outlet pass contributes to that more than one would think. Failure to get the puck out on the breakout or deep off the rush cannot be an acceptable act for this team if they want to succeed in the way they play.
Advertisement
Ad
Advertisement
Ad
Corsi King – Tyler Toffoli (78.49 CF%) led the way for Calgary with Adam Ružička (72.97%) and Nazem Kadri (68.23%) beside him on the podium. We’ll get to the skilled Slovakian kid at the end of the write-up, for now let’s talk about the solid performance of Noah Hanifin (66.35%) and Rasmus Andersson (62.57%). If Calgary is to win games, they need at least 2/3 D pairings on the right side of possession and chances. They don’t have that stand out, carry you to victory on their shoulder’s defencemen. Instead, rather, they have a collection of very talented defenceman they need to have play at a higher level. MacKenzie Weegar (50.88%) and Nikita Zadorov (50.70%) have found a way to chemistry every night lately, Hanifin and Andersson are still up and down. More consistent runs of play at this level are needed to crawl back into the playoff picture.
Advertisement
Ad
Advertisement
Ad
Corsi Clown – The guy that got his butt stapled to the bench for the second time this season – Kevin Rooney (8.92%) – may have played himself into the press box. In words anyway, Calgary only has 12 active forwards on their roster, so he “has” to play… unless they go 7D, but their options for a seventh D right now are Dennis Gilbert and Nick DeSimone – doesn’t exactly breathe excitement into the air for fans either way. Bottom line is Rooney hasn’t been able to defend at a level accepted by his coach so far, all the way to the point the coach sees the team as better with him not playing. Good thing he’s at $1.3 million ($550,000 above league minimum) against the salary cap for this year and next.
Under Pressure –
I’ll just come out and say it – nobody had good sustained long term pressure. It looked exactly how one would expect a Darryl Sutter vs. Rick Bowness match to go.
Advertisement
Ad
Advertisement
Ad
Taken By Chance – Anytime somebody gets sat on the bench someone else has to take his place, playing more minutes than they’re used to with different wingers that play a different style. A whole lot of different sprinkled in that sentence 0 for good reason. Now when I say Mikael Backlund (35.15 SCF% // 21.14 HDCF%) was on for over 7 high danger chances against you have some context as to why. This is the category the Jets stood out as big winners in – finding all sorts of crazy good looks on Markstrom without being able to beat him. Shoddy defensive play at best – Sutter even alluded to it. In his post-game presser he said he hadn’t quite found the magic combinations on defence yet. Compliments to Andersson (72.87% // 79.91%) and Hanifin (65.98% // 69.88%) for not falling into that description in this game.
Advertisement
Ad
Advertisement
Ad
xG Breakdown –
I think most of those Mangiapane shots were the result of a one-on-one where he failed to get separation or a truly quality look. I criticized him online for his play in one-on-one rush situations and I truly believe it to be valid. He’s way more effective driving from out of the corner or off the wall after sustained pressure.
xGF% – Everyone is focusing on Kevin Rooney and his 0% expected goals ratio, while Brett Ritchie notched up a 0.77% too. The centre is the driver of the line, but that means he didn’t even get a chance off the rush up the wall. You cannot tell me that someone on the Wranglers can’t put together at least a shred of a better performance at their worst than what was seen from the bottom-line guys in this one. I mean you can tell me – I’ll just tell you I disagree to your face. Leading the way – in the quietest of fashions too – was Dillon Dubé (89.90%). 1 scoring chance for, it was high danger, with none against. He also got bumped down to the fourth line for Lucic but nobody is talking about that.
Advertisement
Ad
Advertisement
Ad
Game Flow –
I’m surprised Kyle Connor didn’t score – the Flames were just giving him prime looks in the first and second period. You can tell which ones are his by the long lines in the direction of the Jets momentum.
Game Score –

Shot Heatmap –
You can not go home feeling good about your win if you gave that up defensively. The good news is Calgary was able to get enough chances from that same area to get the bounces they needed. The giant blue area in front of Markstrom though – yikes.
Advertisement
Ad
Advertisement
Ad
In The Crease – Time to talk about the number 1A reason the Flames got two points in this game. A wise person said to me that everyone describing Markstrom’s cartwheel save as a Reto Berra save are all too young to know who Bill Ranford was. You are going to see that save highlighted through till the end of the season on every single play of the year countdown out there. What makes it even better? Making that save in a win where you were an absolute rock. Maybe Pierre-Luc Dubois through a temper tantrum of Tkachuk stick-flip proportions because of how great Markstrom was – not the intentional/accidental trip. 2.23 expected goals against at a 0.947 5v5 SV%, a truly amazing night from #25.

Here is a closer look at that incredible stop. https://t.co/Z9KZHjQzMJ pic.twitter.com/soy2CCoWyB

Advertisement
Ad
Advertisement
Ad
Today’s Specials – To my knowledge the power play is run by associate coach Kirk Muller. Now I can’t speak to whether or not he gets to pick the personnel for the power play, but if he is he needs to go back and reassess. The first power play the Flames had in this game was one of the most pitiful man advantage efforts I’ve ever seen. The drop back pass to create a line of 4 players charging the blue line – and if they fail it’s a shorthanded odd man rush the other way. Just the dumbest execution and a severe lack of established possession. Switch things up going forward, and by saying that I don’t mean Lucic on PP2 – I mean the actual strategy behind the power play.
Advertisement
Ad
Advertisement
Ad
Player Spotlight – Adam Ružička – It has only been three games with the Flames top line, but he already has Lindholm looking like he used to. Tkachuk always used to go on the wall, crash and bang and win puck battles, then dish it up the wall to Johnny or fish it through the slot to Lindholm. Huberdeau and Toffoli have both failed to be the “guy on the boards” to this point for Calgary. Weird because Sutter always compliments Toffoli being able to get the puck off the boards, but it hadn’t really come to light this season yet. Ružička has stepped into that role and not looked remotely out of place for a second. He’s always had the knack for being an offensive player – even in junior and the AHL – him getting a proper shot is going well for him. I have no clue how long Huberdeau is out for, but if Ružička continues to work with Lindholm and Toffoli he shouldn’t be put back there.
Advertisement
Ad
Advertisement
Ad
The Goals –

Elias Lindholm gets the #Flames on the board with a nice tip! pic.twitter.com/xzy6yCjtjG