Advertisement
Ad
Beyond the Boxscore: Flames do what they need to against lowly Sharks 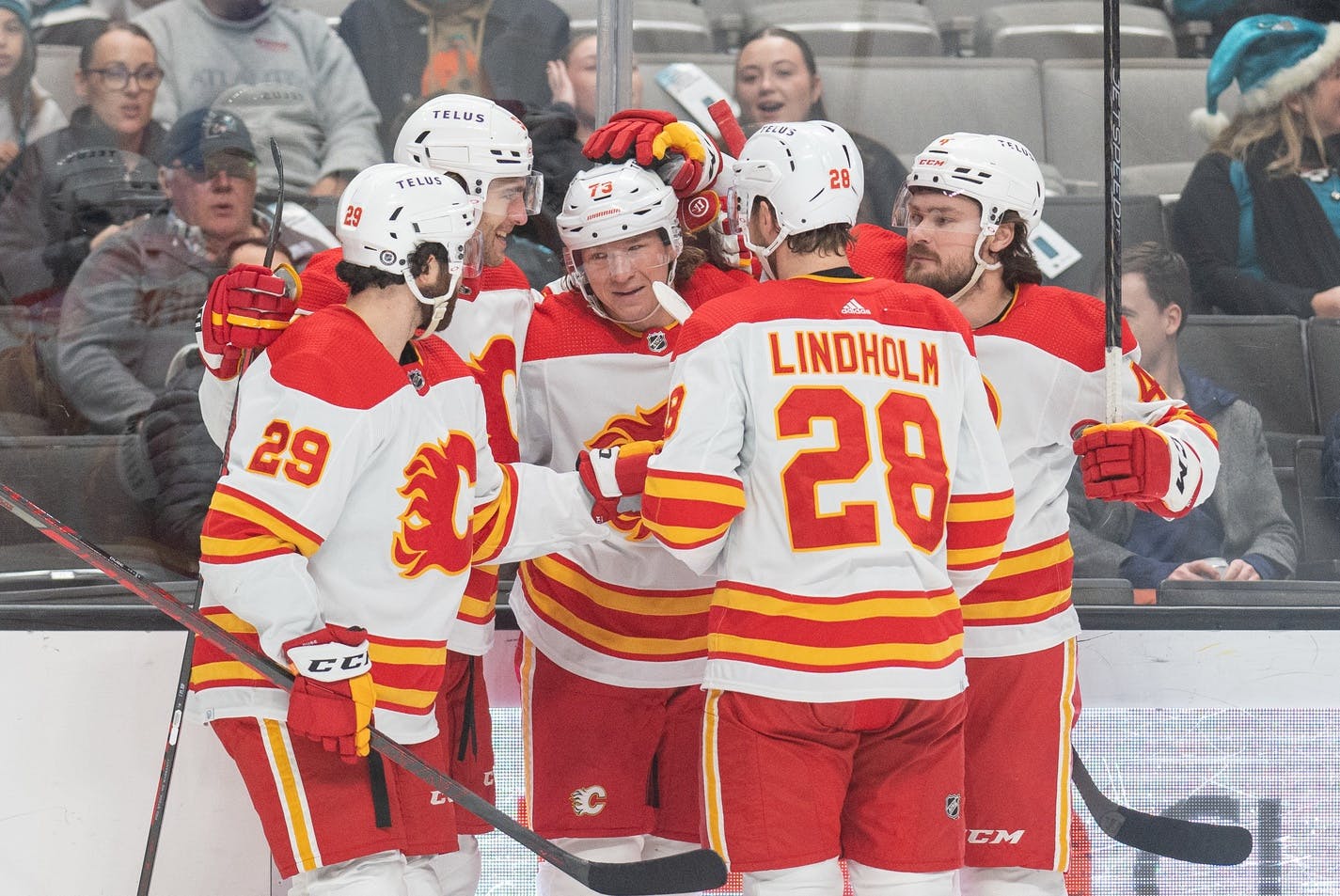 Photo credit: Stan Szeto-USA TODAY Sports
By Shane Stevenson
1 month ago
Comments
A positive sign for the Calgary Flames as they did what they needed to do on Sunday night against the San Jose Sharks to earn a victory. An electric start to the third period saw the full potential of the Flames offence when they can find passing lanes and get off quality shot attempts. The Sharks themselves really struggled to defend against the Flames and were only able to generate goals from their power play. Sometimes just having a successful routine performance can snap everyone back into high gear – lets see if they build off this.
CF% – 68.09%, SCF% – 67.9%, HDCF% – 56.58%, xGF% – 63.98%
It’s a Team Game – It was a game where Calgary dictated everything pretty well all night. San Jose is at the bottom of the standings and with the way they played it is very easy to see why. Calgary used this to get off their losing streak and hopefully can use their next game here to go in a positive direction. The Flames dressed 7 defencemen for this game, and near the end it appeared Nikita Zadorov may have been injured. If he goes down that will leave a sizeable hole in Calgary’s slot defence.
Advertisement
Ad
Advertisement
Ad
Corsi King – Dennis Gilbert (86.75%) only played 3:39 at 5v5 so Mikael Backlund (80.82%) is the real top. MacKenzie Weegar (79.29%) just behind him. Every single Flame graded above 50% as this game was in Calgary’s hands at all times. Everyone got their fair share of chances but only Adam Ružička (61.21%) was hit with a decline in ice time. I’m most certainly on the opposite page as the coach – I don’t think he needs to sit the immediate second he makes a mistake. Sending a “be here on time” message two games in a row is more a nuance then a message. He’s been their leader in xG creation – he’s getting the best quality of chances out of everybody – yet he’s in the doghouse right now for a few simple things. I understand the thought process, I just really am on the other side of the fence about it.
Corsi Clown – ZILCH!
Under Pressure –
Taken By Chance – Noah Hanifin (81.83 SCF% // 86.29 HDCF%) led the rearguards and Blake Coleman (74.26% // 80.34%) paced the forwards. Rasmus Andersson (78.87% // 79.52%) led everybody with over six high danger chances himself. Remember this doesn’t mean that person got 6 chances all off his stick, they were just on the ice for one of the high danger chances that occurred. If the team is attacking the middle of the ice like they did tonight everybody ends up with great metrics.
Advertisement
Ad
Advertisement
Ad
xG Breakdown –
xGF% – Andrew Mangiapane (77.11%), Jonathan Huberdeau (67.33%), and Nazem Kadri (70.75%) took a step forward as a line. It is a good thing to try and develop chemistry in the games where there’s more free ice than usual. Elias Lindholm (59.08%) was finding the sweet spots in the upper slot too at the start of the third. He scored a lot of his 40+ from last year in that area but not too many of them yet this year. If the wingers can use games like this to round in to top form the Flames can still get a run going.
Game Flow –
Game Score –

Shot Heatmap –
In The Crease – A 5v5 shutout for Jacob Markstrom on just 14 attempts. Still, he had to make 5 high danger stops, but that’s been low compared to what he had been seeing. Most important thing was he didn’t look bad, and he didn’t let in any weak goals. No quarrels from my corner about Markstrom’s performance.
Advertisement
Ad
Advertisement
Ad
Today’s Specials – The San Jose PP carved up our PK right off face-offs twice. Erik Karlsson is still an extremely special talent with great offensive vision and that was noticeable on the first goal. The assist was his 700th career point. Calgary may have faltered on the PK but at least they let us watch a small portion of history.
The Goals –

Milan Lucic gets his first goal of the season! Trevor Lewis got credit in the building. But it looked like it went off Erik Karlsson, not Lewis.

What a shot by Elias Lindholm!

Dillon Dube scores from a bad angle. Nice skill shown by Dube to finish that chance.

Flashalytic’s 3 Stars –
1) Elias Lindholm
2) Noah Hanifin
3) Mikael Backlund
The Flames next game is also going to be a late one as they play San Jose again on Tuesday night.
(Stats compiled from Naturalstattrick.com // Game Score from Hockeystatcards.com // xG and Under Pressure charts from HockeyViz.com // Game Flow and Shot Heatmap from NaturalStatTrick.com)
Advertisement
Ad
Advertisement
Ad