Advertisement
Ad
Beyond the Boxscore: Flames dominate at five-on-five against Oilers 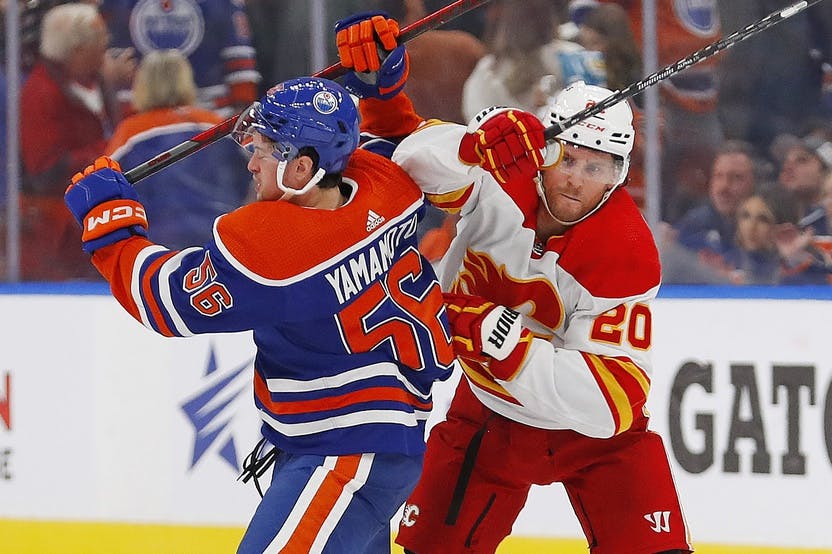 Photo credit: Perry Nelson-USA TODAY Sports
By Shane Stevenson
3 months ago
Comments
The Calgary Flames controlled the majority of Saturday’s game against Edmonton from start to finish in what was a really impressive showing from the boys in red. The only time the Oilers were a consistent threat was when they had a man advantage. At 5v5 Calgary was able to shut McDavid and company out – giving next to nothing from the high danger areas of the ice. The Oilers struggled with the Flames forecheck which was a relentless thorn constantly in the presence of the copper and blue rearguards. Sprinkle in some big saves when it mattered and the Flames start the season with a 2-0-0 record.
CF% – 65.29%, SCF% – 62.23%, HDCF% – 61.69%, xGF% – 67.61%
It’s a Team Game – The Oilers did come out hot and heavy to start the second period. Calgary weathered the storm and eventually settled things down looking to take control while the score is at 4-1. One blow of the refs whistles later and it’s magically 4-2 due to the hockey cheat code that is McDavid (nifty pass from Kane). Then McLoed gets one of the last high danger chances the Flames will surrender in the game to bring it close. Deep down I’m sure many Flames fans were flashing back to all the pain of last season, but this new look team did not give up and closed things out in a big way. It wasn’t a limp and hold on finish, it was Calgary controlling the third period when they needed to.
Advertisement
Ad
Advertisement
Ad
Corsi King – Hear the word of the possession profit Brett Ritchie (88.46 CF%). He had the best Corsi numbers from last year’s fourth line rotations – in this game he was a constant presence on the forecheck combined with a good effectiveness at making sure the puck got out of his own zone whenever it came to his side on the breakout. He plays the simple north south game that works for Calgary’s fourth line – he is inevitable folks. Nikita Zadorov (78.29%) was the defenceman with the largest ratio for the Flames. In fact just two players finished with below 50%
Corsi Clown – Jonathan Huberdeau (46.84 CF%) improved on his metrics from the first game but was still lowest on the team. Linemates Tyler Toffoli (49.08%) and Elias Lindholm (51.85%) round out the bottom three – which is a testament to how much Calgary controlled this game. This honestly was the difference of about one shot attempt, but it has been two games with a severe lack of shifts with extended zone possession for this line. They have not been bad, but they also have yet to have a stretch that stands out as above and beyond more than just okay.
Advertisement
Ad
Advertisement
Ad
Under Pressure –
The Oilers really did come out all gas in the second period. Kudos to the Flames for surviving that and regaining control right after. Outside that start, all of the Oilers spikes in pressure coincide with having a man advantage (5v4, 6v5).
Taken By Chance – Noah Hanifin (67.89 SCF% // 72.79 HDCF%) stands out with a 7-3 advantage in high danger chances. He’s constantly been an elite driver of quality scoring opportunities and well above replacement value in xG creation. He gets some hate online occasionally, but Noah Hanifin is one hell of a piece to have on your defence. He always finds creative passing lanes in the offensive zone when pinching off the wall, lanes other guys do not tend to see. Jonathan Huberdeau (35.65% // 72.22%) may not have had crazy possession but he certainly helped limiting high danger chances while he was touring the ice. Only one player had negative ratios in both all situation scoring chances and high danger chances: Tyler Toffoli (39.31% // 40.01%).
Advertisement
Ad
Advertisement
Ad
xG Breakdown –
I typically stick to 5v5 SVA for most of everything – but these xG charts are all situations. Nazem Kadri decided after passing most of the first night he would lay on the shot attempts in this one. Two games in the Flames have fed off his lines energy which has yet to wane.
xGF% – I like to refer to this section as a good measure of quality of opportunities. The more dangerous the attempt the higher the value the xG attempt is worth. Players in theory could have one high danger chance worth about 0.5 xG and see 6 low danger chances worth 0.1 against. In that situation the player would have a 45% xG ratio. Taking that explanation into account we can bring Toffoli (50.76 xGF%) back into the conversation and see he finished roughly even despite being out chanced. It’s a good way to see that the chances Toffoli did get were worth more collectively than what he saw go against him (albeit just slightly in this case). Hopefully that can help the reader understand xG a little more. First three guys into the 90% club this year were Brett Ritchie (98.75%), Milan Lucic (97.04%), and Kevin Rooney (92.82%).
Advertisement
Ad
Advertisement
Ad
Game Flow –
It felt closer than it ever really was – that’ll happen with the offensive weapons on the other bench. There are still things to work on – there literally always is – but the team should feel good about their performance.
Game Score –

Shot Heatmap –
Compliments to Dan Vladar who sucked up every single Oilers shot off the rush and hardly gave them a chance to enact a forecheck. If the Oilers wanted to get a bit more success they should have prioritized more extended pressure but instead tried to go with quick shots for rebounds. Calgary did the former and chased the Oilers new goaltender in his second outing. Compliments to Stuart Skinner because the Flames could have had up to 7/8 goals.
Advertisement
Ad
Advertisement
Ad
In The Crease – Big saves and bad goals – I borrow that from Darryl Sutter all the time because it resonates with me on my technical knowledge of the goaltending position. The only goals to beat Vladar on Saturday night were high danger chances – no bad goals. As for big saves just watch the last minute of the game. Vladar kept Calgary in that right until the end and the team repaid their goaltender by limiting as many dangerous chances as they could in front of him. Symbiosis with the defence makes for even better results. 1.87 expected goals against, 2 high danger goals getting by him, a 5v5 SV% of 0.900%.
Today’s Specials – I’m pretty sure two clones of Patrice Bergeron and two clones of Zdeno Chara would still get scored on if going up against a McDavid power play. Calgary did something in this game they hardly did all last year by staying out of the shenanigans. All those do is benefit the Oilers who have to rely on that some nights to compete. In my opinion limiting them to just one goal on four tries was good. By doing that the Flames could then let their superior 5v5 play speak for itself.
Advertisement
Ad
Advertisement
Ad
Player Spotlight – Mikael Backlund – After a not so shining outing against Colorado, Backlund bounced back. He is a key factor on paper this year for the Flames being able to outmatch most of the league. Having Nazem Kadri – who isn’t shy to match up with anyone 5v5 – frees up Backlund to constantly go against lesser competition. For an opposing coach to try and counter that – well good luck. No matter what happens in the prior game I always have faith in Backlund to come back the next game strong. He hardly ever disappoints.
The Goals –

BACKSSSS!!! Makes it 1-0 (not for long) early into this game off a nice shovel in front 🔥 #Flames pic.twitter.com/wxmHaVugUW

MICHAEL STONE!!! Launches an absolute howitzer from the point to make it 2-1 🔥🔥 #Flames pic.twitter.com/6HpDyjKrJa

NAZZZZZ!!! GETS HIS FIRST GOAL AS A FLAME OFF OF THIS BEAUTY. 3-1 🔥🔥🔥 #Flames pic.twitter.com/OsVRBYCuPv

ANDREW EAT BREAD!!! Knocks home a rebound and makes it 4-1. With that goal Jack Campbell gets pulled from the game in just 10 minutes. 🔥🔥🔥 #Flames pic.twitter.com/PGtQHxDDwL