Advertisement
Ad
Beyond the Boxscore: Johnny Gaudreau dances the Calgary Flames to victory 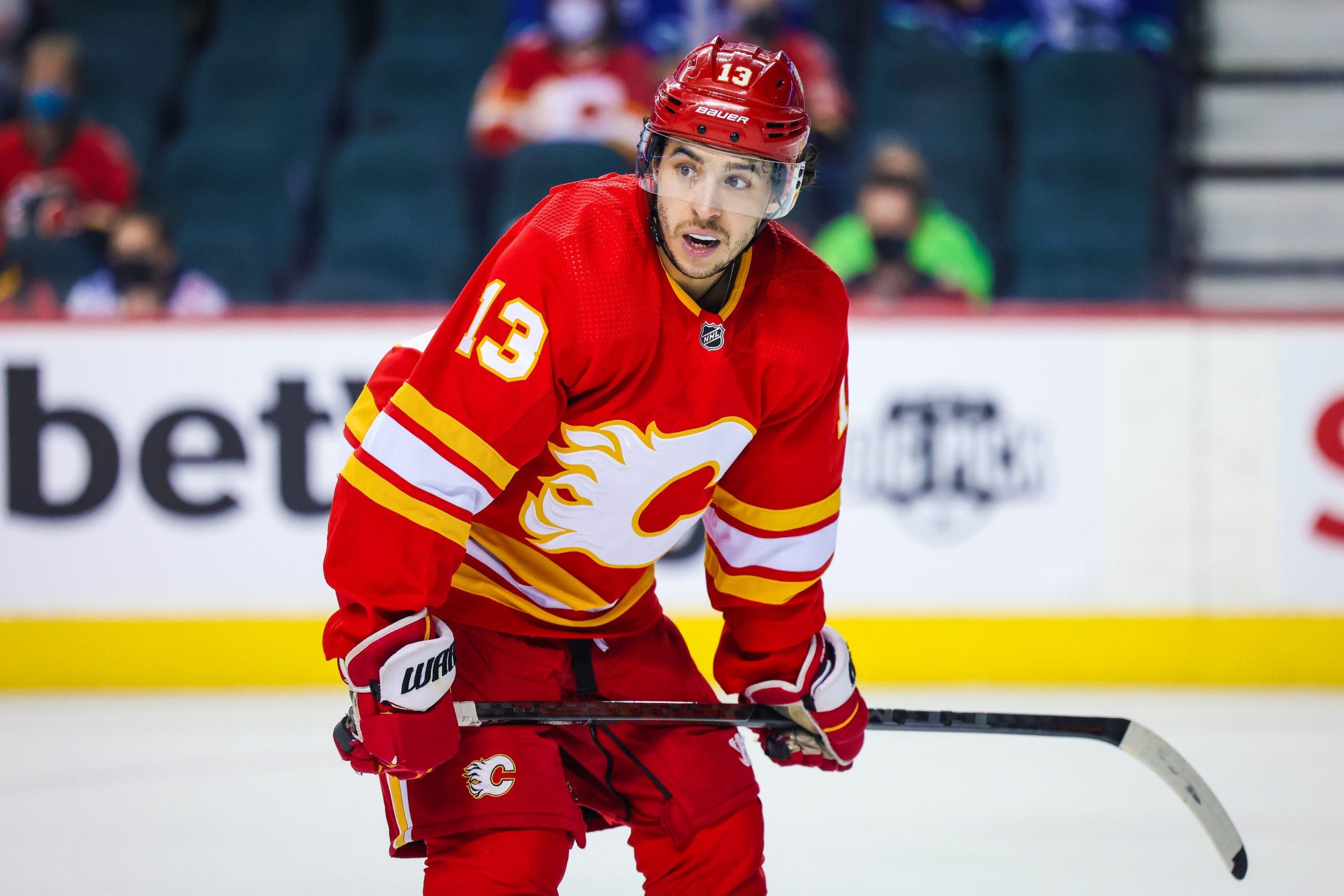 Photo credit: Sergei Belski-USA TODAY Sports
By Shane Stevenson
8 months ago
Comments
The scoreboard says the game was one sided, which it was, but the Flames had some bad habits creep up at times that one would not necessarily celebrate. Letting in goals late in periods are what sticks out the most – the time of the game when you want to be extra smart with the puck to ensure a safe transition into the next frame. It was not the most flattering start either with the team coming out slow – but Johnny Gaudreau fixed that in the second period when he came out flying and changed the entire pace of the game. Playoffs are just around the corner – don’t be complacent and watch for the neutral zone turnovers.
CF% – 68.97%, SCF% – 63.71%, HDCF% – 90.37%, xGF% – 69.28%
Advertisement
Ad
Advertisement
Ad
It’s a Team Game – Regardless of my minor criticisms Calgary did control. The pace and flow of this game. The first was quite the slug fest with not a lot of opportunities and a couple penalty kills. The Flames very easily could have found themselves chasing early with how that frame played out – after the second period started and they got 2 quick goals the Flames started playing more like the Calgary team we’ve seen all year. After the first period Arizona never quantified a high danger opportunity but achieved 2 goals – doesn’t matter where the team is in the standings if you turn the puck over at the NHL level, you’ll pay the price.
Corsi King – Rasmus Andersson (77.92 CF%) has achieved his first 40-point season in the NHL. Noah Hanifin (74.60%) and Razz continue to be a fantastic top pair for Calgary. Now let’s scroll to the bottom and check out that even Tyler Toffoli (53.01%) was on the positive side of all the attempts taken. You know what that means?
Advertisement
Ad
Advertisement
Ad
Corsi Clown – It means nobody needs to be in this section for the sixth time this season – a new record since I’ve started tracking games like this (mid 2018-19 till now).

Matthew Tkachuk beats a leaning Vejmelka off of Gaudreau's nifty dish to open the scoring for Calgary!#Flames pic.twitter.com/SxZmrIRoyg

Taken By Chance – The fourth line was definitely on top of things in terms of overall chances, but nobody on that line was able to achieve a high-danger chance that needed to be saved by the goaltender. Good news is they didn’t surrender one either – the line that allowed the dangerous chance in the first period was Tkachuk (70.18 SCF% // 84.67 HDCF%), Dubé (50.00% // 46.74%) and Backlund (55.97% // 46.74%). Andersson, Hanifin, Coleman, Mangiapane, Lindholm, Jarnkrok, Gaudreau, Zadorov, and Gudbranson all participated in some amount of high danger scoring chances while allowing none against.
Advertisement
Ad
Advertisement
Ad
xGF% – Blake Coleman (87.32 xGF%) and Calle Jarnkrok (77.22%) were able to provide me with a bit of humour at one point in this game. I was specifically watching how the two forwards were defending high in the zone while the puck was in the Flames own corner and the two almost mirrored each other as they did their respective defending loops in the slot just on either side of the ice. Jarnkrok specifically has a bit of Mangiapane (83.77%) in him as well – the speed and constant pursuit of the puck has me ready to dub him the Beekeeper 2.0. Heck that Coleman-Jarnkrok-Mangiapane line can just be the honeycomb line for all I care.
Game Flow –
I love being able to visibly see dominating shifts on this one – you can clearly see the tide turn in favour of Calgary on that first shift of the second period. I credit Johnny so much, but Elias Lindholm deserves credit for always being there to help him in transition and Matthew Tkachuk deserves credit for always being behind the net taking a beating while allowing the Flames to set up their attack. Now that’s just the first line, but they have similar players on each line that all know their job and placement when attacking the net.
Advertisement
Ad
Advertisement
Ad
Game Score – Johnny Gaudreau (3.32 game // 1.73 average), Rasmus Andersson (3.16 // 1.05), Tkachuk (2.27 // 1.69) and Noah Hanifin (2.02 // 0.89) were all the players that scored over 2.00 in last night’s game. Lowest Flames skaters were Gudbranson (0.01 // 0.48) who was out for both goals against and Markstrom (-0.40 // 0.32) because the goals that went in were from a significant distance out. Unfortunately game score doesn’t ease up on the goaltenders because of bad turnovers by their defenceman.
Shot Heatmap –
The coyotes really do play in a desert – look at the lack of attempts from that squad. Clayton Keller and Nick Schmaltz have been on fire of late so being able to only allow one shot attempt from below the hashmarks is something to be proud of. Clean up the few minor turnovers and the Flames will be all set. Sutter said this yesterday – when it’s bad it’s horrible (in Calgary) and when it’s just okay its great. Calgary as a team can still clean some things up – but the fanbase surely is excited going into the BOA tonight on a win instead of a two game skid.
Advertisement
Ad
Advertisement
Ad
In The Crease – Markstrom really didn’t face a lot of work tonight, but he still probably wants the goals back. I already mentioned the bad turnovers twice, but I never added in the Carcone goal had traffic in front of him too because of the area the puck was turned over. He may have been falling asleep in there too as in the final two frames the Coyotes hardly got anything on net. 0.92 expected goals against with two medium danger goals getting by him. A five on five save percentage of 0.833%.

Today’s Specials – I’m probably repetitive here because every-time the Flames get a power play goal I go “always a good game for the powerplay if they score”. Well that especially rings true tonight because the first PP goal they scored was tick-tac-BOOM by Lindholm in the slot and then the original master of the phrase “boom” – Rasmus Andersson – cut through the entire Coyotes team at the blueline and tucked in a breakaway goal. That was pretty lax coverage by the Yotes but they are an NHL team just the same as any other – the goals all count the same on the boxscore.
Advertisement
Ad
Advertisement
Ad
Player Spotlight – Johnny Gaudreau – Who else would take this spotlight after being the engine that spurred the whole roster out of their funk. The second period started and Johnny was playing in a way I can only describe in one phrase – it was like he was dancing out there. He had tremendous puck control, head constantly on a swivel, and never once stopped moving his feet or his hands as he tried to be an offensive threat. It all climaxed with him scoring his 200th career goal on a 2-on-0 sprung from Nikita Zadorov (we won’t mention the blatant turnover he had 5 seconds prior because he got the puck back and fixed his mistake).
I sure am just enjoying the Johnny Gaudreau ride this year – he should end up with the most points by a Flames player in a season since Joe Mullen had 110 in 1988-89. Currently his pace is for 108 points which would tie him for third all-time.
Advertisement
Ad
Advertisement
Ad

Scoring a goal that's both your 30th of the season and 200th of your career?

Flashalytic’s 3 Stars –
1) Johnny Gaudreau
2) Rasmus Andersson
3) Matthew Tkachuk
The Flames are right back at it tonight in the Battle of Alberta – 8 p.m. MT from the Saddledome.
(Stats compiled from Naturalstattrick.com // Game Score from Hockeystatcards.com)