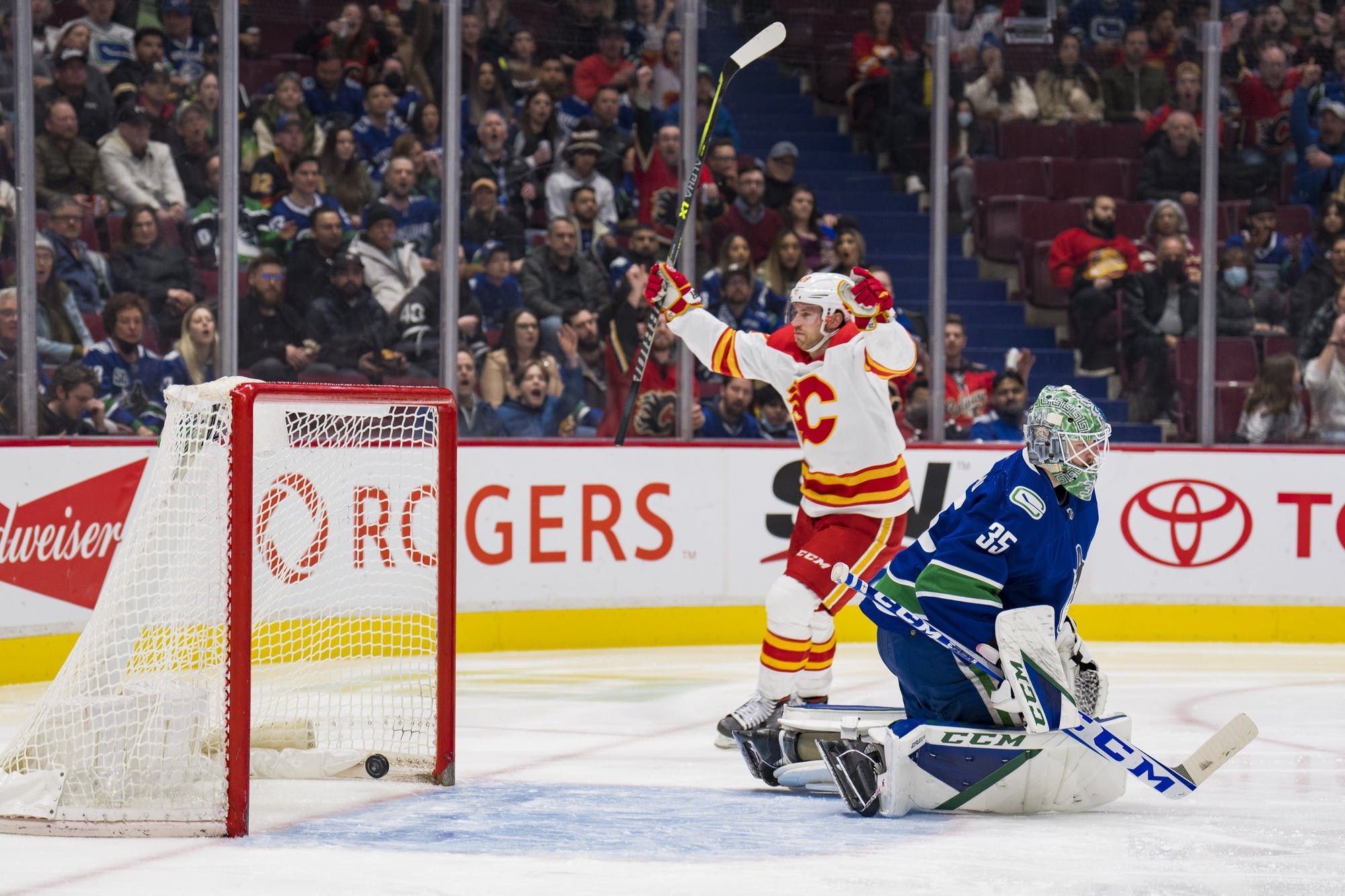 Photo credit: Bob Frid-USA TODAY Sports
By Ryan Pike
8 months ago
Comments
On Friday night, the Calgary Flames weren’t quite good enough against Buffalo in an overtime loss. On Saturday night, the Flames were really, really good against the Vancouver Canucks. They scored early, they scored often, and they often overwhelmed the Canucks with pressure and pace.
The Flames beat the Canucks by a 5-2 score at Rogers Arena in Vancouver.

The Flames weren’t entirely happy with their game on Friday night against Buffalo. They also weren’t happy with their last game in Vancouver, a 7-1 loss in late February. They certainly played like they wanted to have a better result in the first period.
The visitors opened the scoring early in the first period. With the Canucks changing, Calle Jarnkrok put a pass right on the tape for a pinching Noah Hanifin. Hanifin beat Demko with a wrist shot off the rush to give the Flames a 1-0 lead.
Advertisement
Ad
Advertisement
Ad

A few minutes later, the Flames added to their advantage. Mikael Backlund’s line was cycling and battling in the Canucks zone. From the corner, Backlund fed Matthew Tkachuk near the slot area. Tkachuk spun and fired the puck past Demko to make it 2-0 Flames.

A few minutes later, the Flames punctuated their period with a third goal. The Flames entered the zone on the rush and Tkachuk made a nice drop pass to Rasmus Andersson, who had jumped into the rush. His shot beat Demko high to give the Flames a 3-0 lead.

Rasmus Andersson with a salute to the fans in Vancouver. pic.twitter.com/7Dh79gB5Hf

Advertisement
Ad
Advertisement
Ad
Shots were 16-4 Flames (all at five-on-five) and scoring chances 18-2 Flames in the first period.
The Canucks put together some nice shifts early in the second period, hemming the Flames into their own end for several minutes. But the Canucks couldn’t bury any of their good looks. The Flames broke out of their zone on the counter attack. Tyler Toffoli lost his footing as he entered the zone, but he made a nice backhanded pass from his knees that sent Elias Lindholm in all alone on Demko. He beat Demko with a wrist shot to extend the lead to 4-0.

Just beauty all around. pic.twitter.com/atvSpHghCO

Shots were 13-10 Flames (11-8 Flames at five-on-five) and scoring chances 12-6 Flames in the second period.
Advertisement
Ad
Advertisement
Ad
The Canucks swapped goaltenders after the second period, with Demko being relieved by Jaroslav Halak.
Johnny Gaudreau added to the offensive effort on the power play after drawing a high-sticking penalty. Gaudreau was robbed by Halak on an initial opportunity, then got cross-checked down by Quinn Hughes. The puck cycled around the zone again, and Gaudreau sniped the top corner (far side) to make it a 5-0 Flames lead.

Matthew Highmore broke Daniel Vladar’s shutout attempt midway through the third period, deflecting a Juho Lammikko shot past Vladar to cut Calgary’s lead to 5-1. Brock Boeser scored on a late power play, jamming a rebound past Vladar to cut the lead to 5-2 Flames. But that’s as close as the home side got.
Advertisement
Ad
Advertisement
Ad
Shots were 15-11 Flames (9-8 Flames at five-on-five) and scoring chances 7-5 Canucks in the third period.

The Flames were every bit as engaged and sharp as we’ve seen them this season. They fore-checked well. They back-checked well. Their special teams were sharp. Their goaltending was good. Their scorers scored. Their defenders defended. The Flames, collectively, played like a team that was a little bit angry at themselves for how they’ve played from time to time in the recent past.
It was a complete effort and a very well-earned two points.

Tkachuk had three points, but we’re going with Andersson. Andersson was all over this game, making good plays in all three zones and he was generally a menace against Vancouver.
But in a game like this, the Flames had a lot of strong performances.
Advertisement
Ad
Advertisement
Ad

The Canucks were so good and looked very dangerous early in the second period. But they really couldn’t bear down on their chances and rather than using that early advantage in the second to lead to a goal, the Flames were able to score on Vancouver instead. It was a gut-punch and really took away any hope the Canucks had to get a point in this game.

After the Friday loss, Darryl Sutter opted to shuffle up the team’s forward lines:
Gaudreau’s goal was his 80th point of the season.

We knew Jarnkok could play all three forward positions…I didn't hear any talk of him shooting both left and right… #Flames pic.twitter.com/ob3yfmiEj7

The Flames (38-16-8) are headed home. They’re idle until Tuesday night, when they host the San Jose Sharks (my cousin’s favourite team). Between now and then, though, is Monday’s trade deadline at 1 p.m. MT.