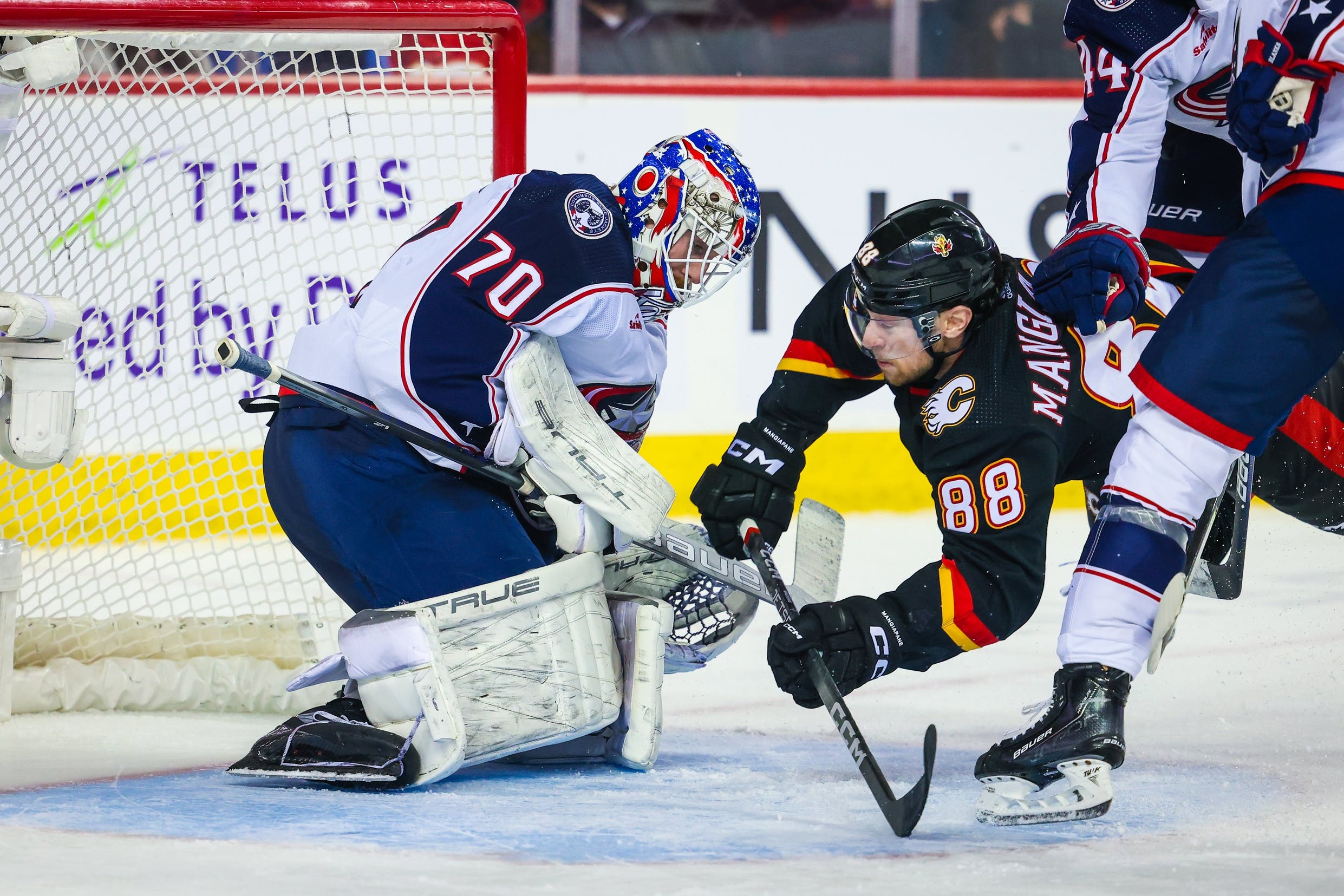 Photo credit: Sergei Belski-USA TODAY Sports
By Ryan Pike
2 days ago
Comments
Be sure to check out NHL betting site Betway for the latest Flames game day odds!
The Calgary Flames were the better team on Monday night at the Saddledome. Sure, they were playing the last-place Columbus Blue Jackets, so you would expect them to be. But the Flames were really good, aside from few consecutive lapses that led to two Columbus goals that made the game close.
But the Flames kept at it, and beat the Blue Jackets by a 4-3 score in overtime.

The Flames were all over Columbus in the opening period, out-shooting and out-chancing them pretty handily. But the Jackets got the first great chance of the game, after MacKenzie Weegar hooked Johnny Gaudreau on a breakaway. Gaudreau missed the net on the penalty shot.

Late in the opening period, the Flames got on the board. Weegar chased a puck down pinching in from the blueline, then fed it to Walker Duehr at the face-off dot. Duehr’s slapper went in and got wedged in beside the camera in the net. But it counted, and the Flames had a 1-0 lead.
Advertisement
Ad
Advertisement
Ad

Walker Duehr scores his second goal of the season!

Good to see the Flames rewarded for their great play in this first period.

Early in the second period, the Flames scored again. Columbus couldn’t get out of their own zone, and Nikita Zadorov made a nice poke-check to disrupt a Jackets’ attempt to grab the puck. The puck bounced off a skate and right to Nazem Kadri in the slot, and Kadri spun and beat Korpisalo to give the Flames a 2-0 lead.

Nazem Kadri scores his 19th goal of the season!

But Columbus answered back a little later in the period, with two power play goals in a 49 second span.
With Dillon Dube in the box for a tripping minor in the neutral zone, Gaudreau found Kirill Marchenko with a gorgeous cross-zone pass. Marchenko sniped the puck glove-side on Dan Vladar to cut the Flames’ lead to 2-1.

Blue jackets score on the PP.

Nine seconds after the Marchenko goal, Kadri chucked the puck over the glass and drew a delay-of-game minor. On the resulting Columbus power play, Gaudreau found Patrik Laine with a great cross-zone pass and Laine’s shot beat Vladar short-side to tie the game at 2-2.
Advertisement
Ad
Advertisement
Ad

Johnny Gaudreau with another incredible pass. This time he finds Patrick Liane and he ties the game.

The Flames had a power play later in the period that they couldn’t convert on, though Jakob Pelletier had a great scoring chance at the side of the net that Korpisalo got a pad on. But after the penalty expired, Columbus whiffed on the puck below the red line in the face of a Calgary forecheck. Mikael Backlund jumped on the bobbled puck and threw it into the slot area where Andrew Mangiapane received the pass, spun and fired the puck past Korpisalo to give the home side a 3-2 lead.

Columbus evened the game up early in the period off the rush. The Jackets headed into the Flames’ zone on a quasi two-on-two, with Boone Jenner and Gaudreau on the rush. Noah Hanifin opted to play the pass and leave Jenner the shot, and Jenner beat Vladar to tie the game at 3-3.
Advertisement
Ad
Advertisement
Ad

Gaudreau fell down at the offensive blueline in overtime, though, which sent Mangiapane and Dube in on a two-on-one against Vadislav Gavrikov. Dube buried the feed from Mangiapane to give the Flames a 4-3 overtime victory.

Dillon Dube wins it in overtime!

The Flames were quite good for big stretches of this game. They had the puck a lot. They threw it on net a lot. But their execution over the course of this game with the puck was iffy. If they could have turned their good looks into good shots with surgical execution, this would’ve been a really one-sided game on the scoreboard. But they didn’t, and so it wasn’t. (Five-on-five shots were 40-19, chances were 39-23 and high-dangers were 11-7, via Natural Stat Trick.)
The other issue was special teams. Once they lost Chris Tanev to injury in the first period, the Flames had a couple kills in the second period where they had big gaps that Columbus repeatedly threw good passes through. Tanev is a big stabilizing force for the club and once you remove him, their play in the defensive zone gets very, very jumpy and scrambly.
Advertisement
Ad
Advertisement
Ad
But the Jackets are still the Jackets, and the Flames were able to take advantage of their many, many turnovers to get two important points.

We make the rules, and we’re giving this jointly to Kadri and Backlund. Both were good at the dot. Both created offence. Both were noticeable, engaged and difference-makers.

The Flames had this game well in hand before they took back-to-back penalties and gave up back-to-back goals. Take those lapses away, and this game is very one-sided and decided in regulation.

This was Gaudreau’s first game back in Calgary – you might have heard about it – and the Flames put together a nice video tribute that they played at the first TV timeout.

So many memories over the years, on and off the ice.

No tribute video for Erik Gudbranson, though. He got a graphic at the second TV timeout.
Advertisement
Ad
Advertisement
Ad
Tanev left the game after a neutral zone collision with Eric Robinson in the first period. He didn’t return to the game.

Here is the Tanev collision. It does not look good.

The Flames (23-16-9) are back at it on Thursday night when they host the Chicago Blackhawks.