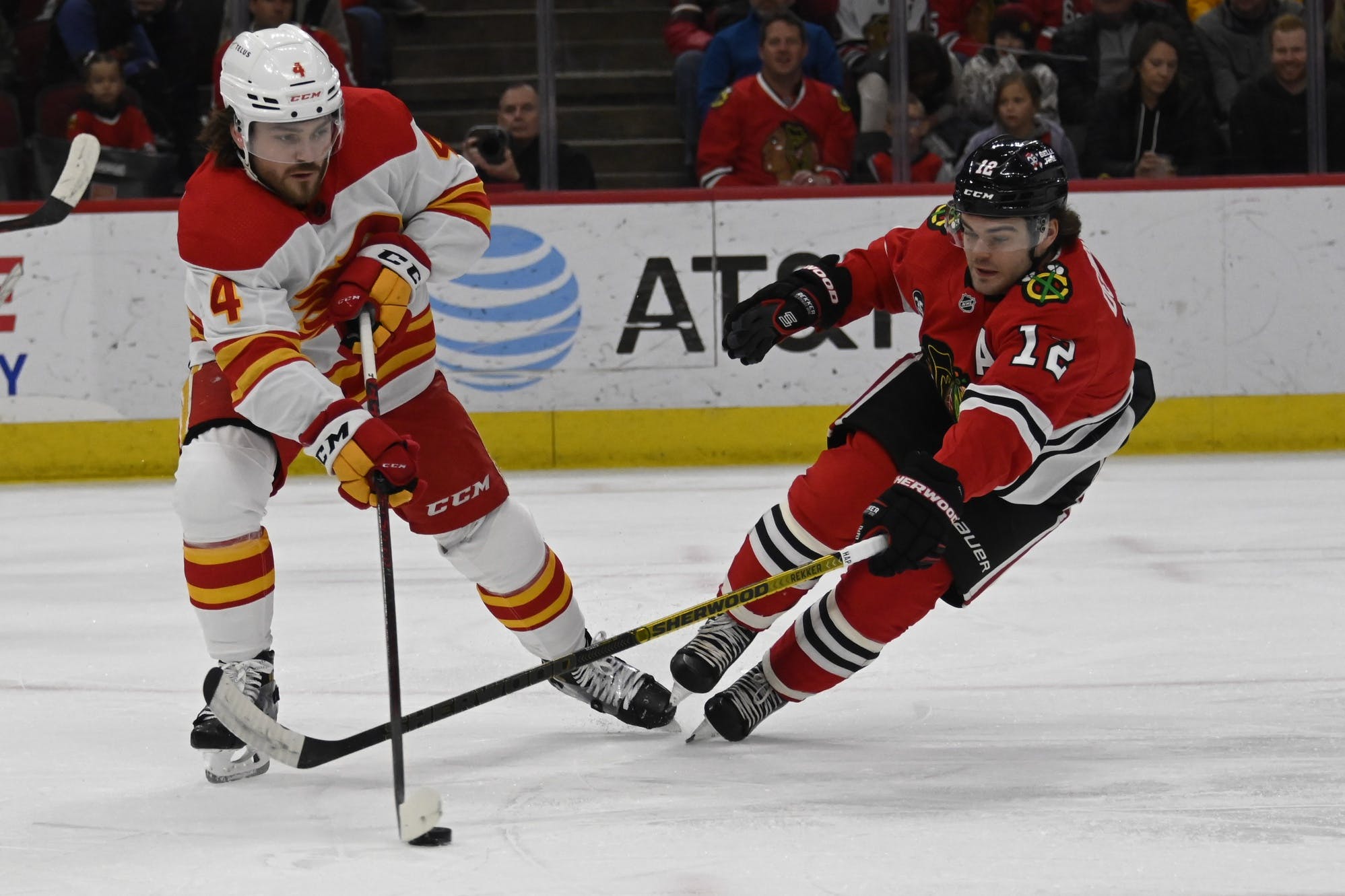 Photo credit: Matt Marton-USA TODAY Sports
By Ryan Pike
9 months ago
Comments
The Calgary Flames headed on the road on Monday night, heading to Chicago to face the Blackhawks in the second-last COVID postponement make-up game on their calendar. The Flames got an early lead and then hung on, beating Chicago by a 5-2 score.
The recap is here, if you missed it. Here are selected highlights and post-game comments from Monday night.

The kid is heating up 🔥 pic.twitter.com/63f5qATMHa

Connected on the redirect. pic.twitter.com/IhT37I6ePA

Alec Regula gets his first in the NHL, whipping one home from the side boards! Hawks within 1!#Blackhawks pic.twitter.com/8yFa0ODmhN

"We played good."#Flames head coach Darryl Sutter shares his thoughts on the win in Chicago. pic.twitter.com/1L5vZnuHFE

On the win: “Played good… It’s a hard game to play. Clinched a playoff spot two nights ago, travelled all day yesterday. It’s a hard game to play. It’s a game where the kids on the other sides are going to come out and try to show their worth, and they did.”
On Jacob Markstrom’s performance: “Made more big saves than one bad save, that’s for sure. He made a lot of big saves. 88 and 12 were hopping out there for the other team.”
On the performance of the line of Dillon Dube, Calle Jarnkrok and Blake Coleman: “They give us some energy and they’re persistent players. I think it’s good for Dillon to play with Blake right now. I think he’s got lots of cleaning up to do in his game.”
Advertisement
Ad
Advertisement
Ad
Johnny Gaudreau

"We stuck with it and got the win."

Jacob Markstrom and Johnny Gaudreau reflect on the win over the Blackhawks. pic.twitter.com/02vHPBvD1W

On how the game unfolded: “I thought we had a good first period, obviously. Quick couple goals there. I think we could’ve had a few more. I think their goalie played pretty well there in the first, helped them stick around a little bit. And then in the second, kind of let our foot off the gas and in the third they kind of pushed us back a little bit. But we stuck with it and got the win.”