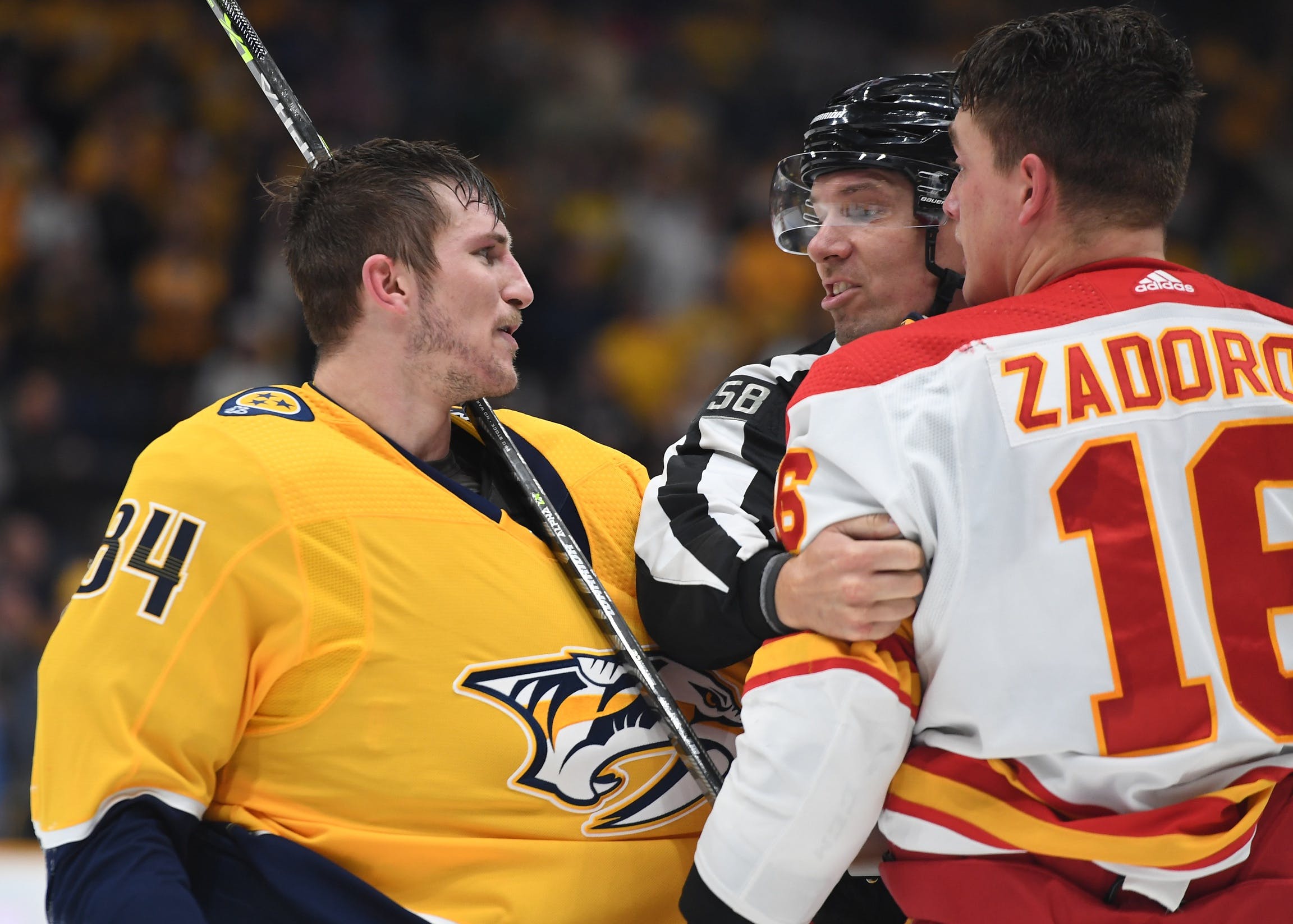 Photo credit: Christopher Hanewinckel-USA TODAY Sports
By Ryan Pike
9 months ago
Comments
In a preview of a possible first round match – call it Game 0 – the Calgary Flames faced the Nashville Predators in a physical, goal-filled, dramatic tilt in Nashville on Tuesday night. The Flames tied the game up with 0.1 seconds left in regulation, then scored in overtime to win 5-4.
The recap is here, if you missed it. Here are selected highlights and post-game comments from Tuesday night.

FIL YOU FILTHY MAN YOU pic.twitter.com/SrFoI5xaeE

A TENTH OF A SECOND LEFT! pic.twitter.com/6FrXQQ6zYE

WE LIKE IT, WE LOVE IT, WE WANT SOME MORE OF IT! pic.twitter.com/9wl6nVpIxT

"Lots of emotion, lots of energy in the building, a fun game."

Darryl Sutter sums up the wild 5-4 win in Nashville. pic.twitter.com/67crzoGhv6

On the game overall: “Lots of emotion. Lots of energy in the building. A fun game. Win or lose, it’s a fun game.”
Elaborating on how the game unfolded: “I don’t think you want to be taking all those penalties, that’s for sure. There’s two or three that were retaliation penalties. In the playoffs, if you take those… Especially against, they have three or four guys that are, their history, their points on the power play, if you look at it, in their careers they’ve made pretty good careers on the power play, some of those guys, so you have to be careful of that.”
Advertisement
Ad
Advertisement
Ad
On the physical engagement in the game: “I thought our young guys were good. I think we had some older players that’ll need to dial into what they’re doing now.”
On being able to claw back into the game: “That’s what playoffs are. Up one, down one, that’s what I said. You have to play every shift like it’s the one that’ll be the difference. That’s the way it works.”
Milan Lucic

"I've got to say, I've played over 1000 games and that was probably in the top five games that I’ve been a part of, with the goal, the hits, the fights, the emotion, the crowd."

What a night in Nashville. pic.twitter.com/XMN5br1qI7

Summing it up: “I just think we showed a lot of character in sticking up for each other and for ourselves. I said it even after the Saturday night game that this game wasn’t going to be just one where you’re going through the motions, because they’re playing to clinch a playoff spot and it’s a possible first round match-up. I think everyone that was here or watching on TV got their money’s worth, and I gotta say, I’ve played over 1,000 games now, that’s probably in the top five games that I’ve been a part of with the goals, the hits, the fights, the emotion, the crowd. It was a great game to be a part of.”
Advertisement
Ad
Advertisement
Ad