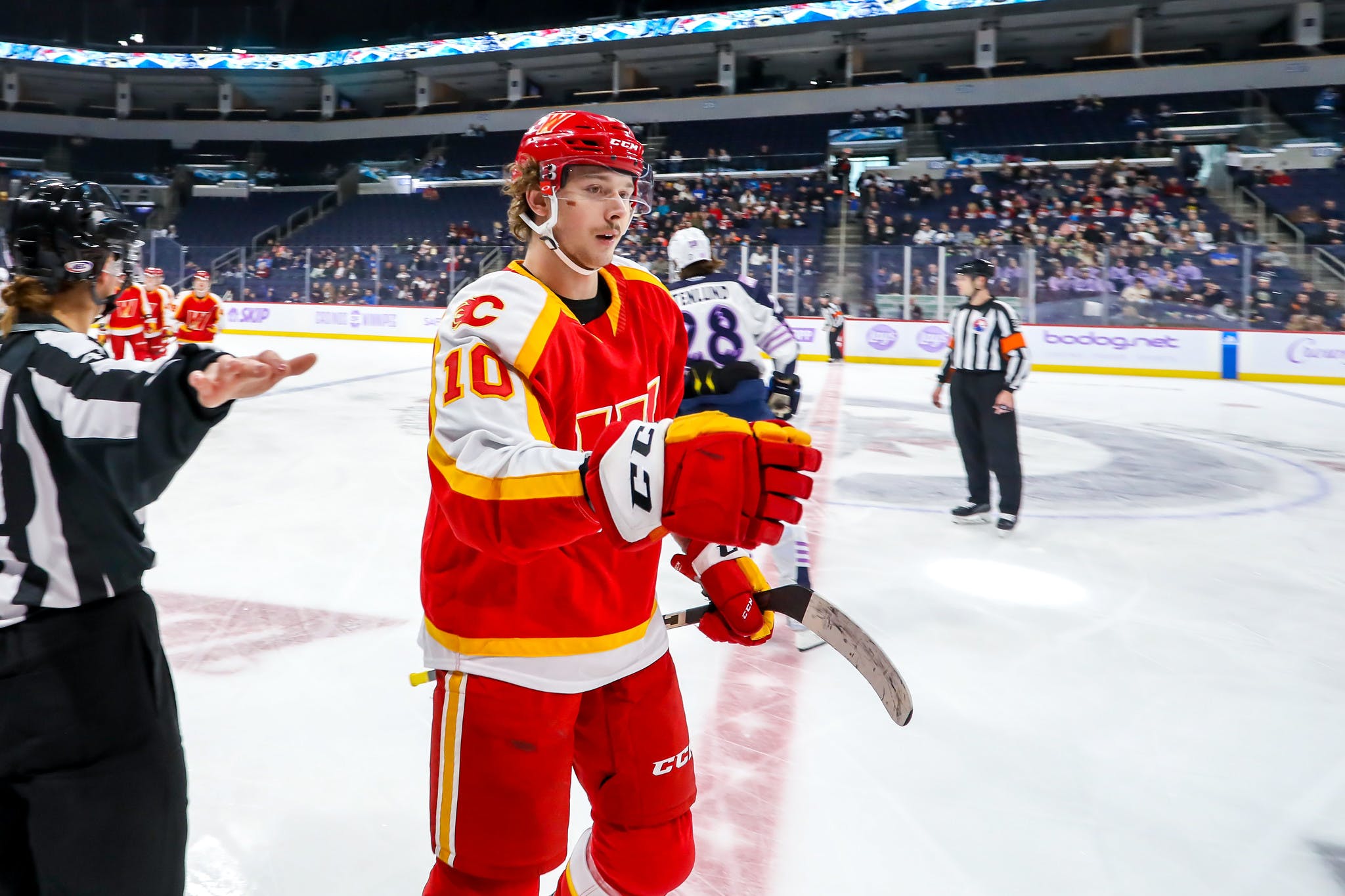 Photo credit: Jonathan Kozub/Manitoba Moose
By Mike Gould
2 months ago
Comments
The Calgary Wranglers extended their team point streak to five games with back-to-back strong outings against the Manitoba Moose over the weekend.
Cole Schwindt scored his first four goals of the season over the doubleheader, with two of them coming in the first two periods of Calgary’s 3–2 regulation victory over the Moose on Friday.
The big forward added two more in the opening frame of the Wranglers’ 4–3 loss to the Moose on Sunday, including receiving credit for deflecting a goal that originally belonged to Emilio Pettersen.

📹 Cole Schwindt is on 🔥 pic.twitter.com/gVKmA2KbAn

Schwindt, 21, entered the weekend series with Manitoba with six points (all assists) in his first 10 games as a Wrangler.
The big forward started the 2022–23 regular season as a depth centre with Calgary but was recently shifted to the wing in an effort to give the team more top-six scoring. The move appears to have paid off: Schwindt now sits in a tie with Radim Zohorna for fourth on the Wranglers in scoring.
Advertisement
Ad
Advertisement
Ad
Schwindt accounted for four of the Wranglers’ six goals on the weekend by himself, with the other two being scored by Walker Duehr and Pettersen. Both of their goals were memorable for different reasons.
Duehr made a tremendous play to deke past Ville Heinola and backhand a shot past Oskari Salminen for what would ultimately go down as the game-winning goal for the Wranglers on Friday.
Pettersen, on the other hand, flipped a seemingly harmless dump-in attempt toward Salminen from the neutral zone.

It’s worth giving a shoutout to Pettersen, who (at age 22) has blossomed into a quality second-line forward for this Wranglers team after being a regular scratch for the first few games of the season.
It’s clear Pettersen has a lot more to offer in a top-six role than many other players on Calgary’s AHL club. He’s fast, has great hands, and can really shoot the puck.
Advertisement
Ad
Advertisement
Ad
Some other notables: Jakob Pelletier racked up a pair of assists over the back-to-back in Manitoba. Connor Zary picked up two. The former first-round picks are right behind Matthew Phillips on the Wranglers’ scoring leaderboard, and they both inched closer to the No. 1 spot with Phillips remaining at 14 points during the two-game set.
While nobody’s all that close to Phillips’ nine goals, Zary has 12 points (six goals, six assists) in 12 games. Pelletier (after a slow start) is up to 11 points (three goals, eight assists). They both should be in the NHL sooner rather than later.
Dustin Wolf continued his recent dominance on Friday, stopping 24 of 26 shots to improve to a 6–2–1 record on the season. His .916 save percentage isn’t quite the best in the league, but it’s getting a lot closer.
Advertisement
Ad
Advertisement
Ad
Unfortunately, Oscar Dansk hasn’t been able to remain in lockstep with the prospect in front of him. He wasn’t bad on Sunday, but his numbers have been nothing short of disastrous through his first four outings: 0–3–1, .842 save percentage. Christopher Gibson (CV) is the only goaltender with worse numbers (1–2–0, .787) so far.
It’s very early for both Wolf and Dansk, and we know to expect stability from both of them going forward. There will always be ebbs and flows for goaltenders during a season. But it did feel like the Wranglers might’ve been able to avoid blowing a 3–1 lead on Sunday if Wolf had been between the pipes.
The Wranglers will return to action this weekend when they visit the Bakersfield Condors for back-to-back games on Nov. 18 and 19.
Advertisement
Ad
Advertisement
Ad

Here are the highlights from tonight's game.#MBMoose will look to get back in the win column on Sunday afternoon! pic.twitter.com/ekN9NQZpak

Here are the highlights from today's game!

Next up, the #MBMoose will kick off a road trip Friday in Texas! pic.twitter.com/IR0Jw8V6bW