Advertisement
Ad
Flames 3, Canucks 1: Are you eating bread yet? 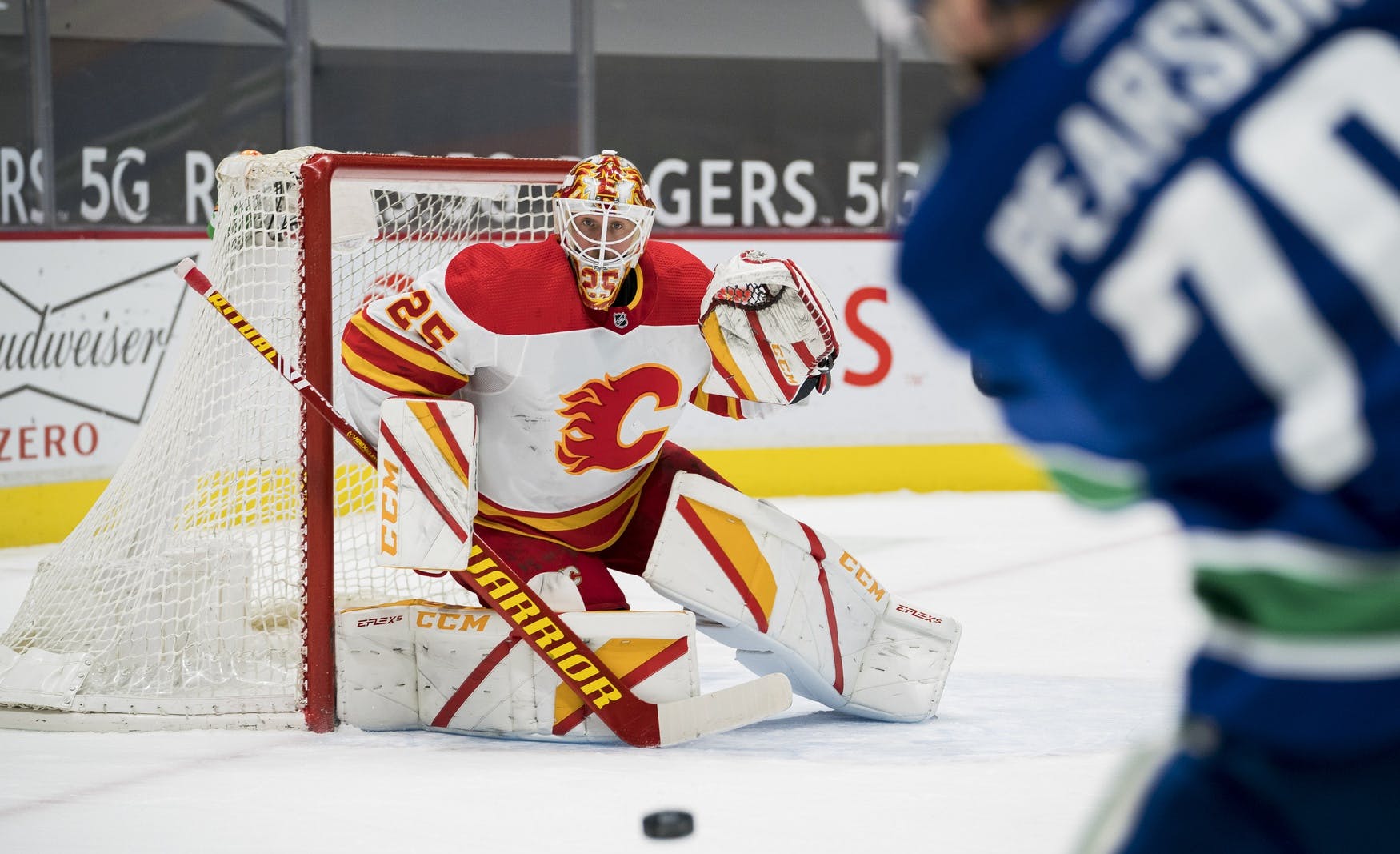 Photo credit: Bob Frid/USA Today Sports
By Mike Gould
1 year ago
Comments
Watch out for that expiring penalty, it’s a doozy.
The Calgary Flames won their third game in a row on Thursday, taking it by a 3-1 score and handing the Vancouver Canucks a sixth consecutive loss.
Oddly enough, all three of the Flames’ goals came within seconds of a penalty expiring. Mark Giordano opened the scoring late in the first just one second after Justin Bailey finished serving a two-minute slashing minor; in the middle frame, again one second after a Canucks penalty (Bo Horvat, for slashing) expired, Andrew Mangiapane beat Thatcher Demko with a bank shot from downtown.

Early in the third period, with the Flames up 2-1 and having just killed off a Sean Monahan tripping infraction, Calgary’s recently-penalized centre exited the box and sprung Johnny Gaudreau for a breakaway. The teeny terror tickled twine with a top-shelf tally.
Advertisement
Ad
Advertisement
Ad
Two of the Flames’ goals came off lucky bounces, with Giordano’s icebreaker hitting Jordie Benn’s ankle on its way to the back of Vancouver’s net. Conversely, the Canucks couldn’t buy a goal despite controlling the play by a wide margin in the opening 40 minutes.
Vancouver generated 0.77 and 0.61 expected goals at even strength in the first two periods, respectively; Calgary responded with just 0.27 in both frames before winning the xGF battle by a dominant 0.95-0.25 score in the third. Despite their early momentum, the Canucks managed only a single goal on Thursday—and it was a weird one.
A new Flame—and a former Canuck—represented the difference between these two teams for much of Thursday’s game.

Jacob Markstrom faced 34 shots on Thursday, an appropriate amount for somebody whose current play bears resemblance to that of a certain past #34.
Advertisement
Ad
Advertisement
Ad
The Canucks remain winless this season against their former goaltender. Markstrom now has a 3-0-0 record against Vancouver to go along with a .968 save percentage and one shutout performance.
A big part of what made Miikka Kiprusoff so incredible was his glove hand. Kipper was always recognized most for his elite athleticism but man, he could flash the leather like few other goalies could. (Click all of those links. I promise, it’s 100% worth your time).
Markstrom echoed Kiprusoff’s catching prowess on multiple occasions against Vancouver, particularly when the Canucks were pushing to gain a lead.

Probably Markstrom's best save of the night pic.twitter.com/Rn2ls7tGvJ

If Markstrom misses on any of those, the Flames are in a hole. Instead, they remained in the driver’s seat throughout Thursday’s contest, scoring first and responding less than 10 minutes after Vancouver’s equalizer. Terrific saves by Markstrom surrounded all those events.
Advertisement
Ad
Advertisement
Ad
The Canucks’ only goal was strange. It began with a beautiful play by Elias Pettersson to get the puck out of the Canucks’ zone—more on that later. Pettersson found a streaking Brock Boeser with a stretch pass and the Canucks winger broke in against Markstrom with nobody in front of him.
With Flames defenseman Nikita Nesterov cutting off his angle from the right, Boeser cut towards Markstrom and flicked a high backhand shot that appeared to handcuff the Flames’ goaltender. He made the save but lost track of the puck in his crease; Boeser spotted it, loose, and poked it home before Nesterov could find it.

Brock Boeser was the lone #Canucks player to score in a 3-1 loss Thursday night in Vancouver.@budweisercanada Highlights | https://t.co/WZ5HGi66Fi pic.twitter.com/X9pbXns1ZW

Either way, Markstrom rocked a .971 save percentage on Thursday. One unusual goal takes little away from that sort of performance. It becomes more of a mystery with each passing game as to why the Canucks moved on from this player.
Advertisement
Ad
Advertisement
Ad

A toast to Andrew Mangiapane

Is it too early to write a “Mangiapane for Selke” column?
By his own standards, Andrew Mangiapane technically had a mediocre game on Thursday. The Flames only generated 57.89% of the shot attempts when he was on the ice at even strength. They only managed 52.45% of the expected goals, Mangiapane’s third-worst on-ice xGF% result of the season to date. Mangiapane only bounced his game-winning goal off of two Canucks defenders.
Mangiapane has more games this season with on-ice expected goals results over 80% (three) than he does games under 50% (two). Among players with over 100 minutes of ice time this season, Mangiapane is third in the entire NHL with a 68.30 xGF%.
The Flames’ sixth-round pick from 2015 is dominating right now both offensively and defensively. Mangiapane’s on-ice expected goals against/60 figure of 1.43 ranks in a tie with Brad Marchand for 13th-best in the league. His 3.07 on-ice expected goals for/60 sits 16th in the NHL. He’s by far the best-ranked player on the Flames in both categories.
Advertisement
Ad
Advertisement
Ad
Mangiapane owns the 13th-best high danger chance rate (69.35%) in the league, but his 6.19 on-ice shooting percentage ranks 352nd (among Flames with a minimum of 100 minutes played, only Josh Leivo’s is worse).
On Thursday, Mangiapane led the Flames by firing five shot attempts towards Demko. All five of them counted as high-danger chances. Four of them reached the goaltender. Mangiapane did take a penalty but he also drew the one that expired right before Giordano opened the scoring.
Assuming there are no delays, the Flames will be able to sign Mangiapane to a contract extension on Jul. 28 of this year. They would be wise to explore a long-term deal; Mangiapane will be a 26-year-old restricted free-agent at the conclusion of his current pact.

Great job by the official to watch Lucic board Justin Bailey mere feet away and not call a penalty. Now Bailey is injured and won't return https://t.co/ZhZadpxNQ4 pic.twitter.com/9ZWkxQE11R

Johnny Hockey is at it again. pic.twitter.com/BRyXLkFBX1