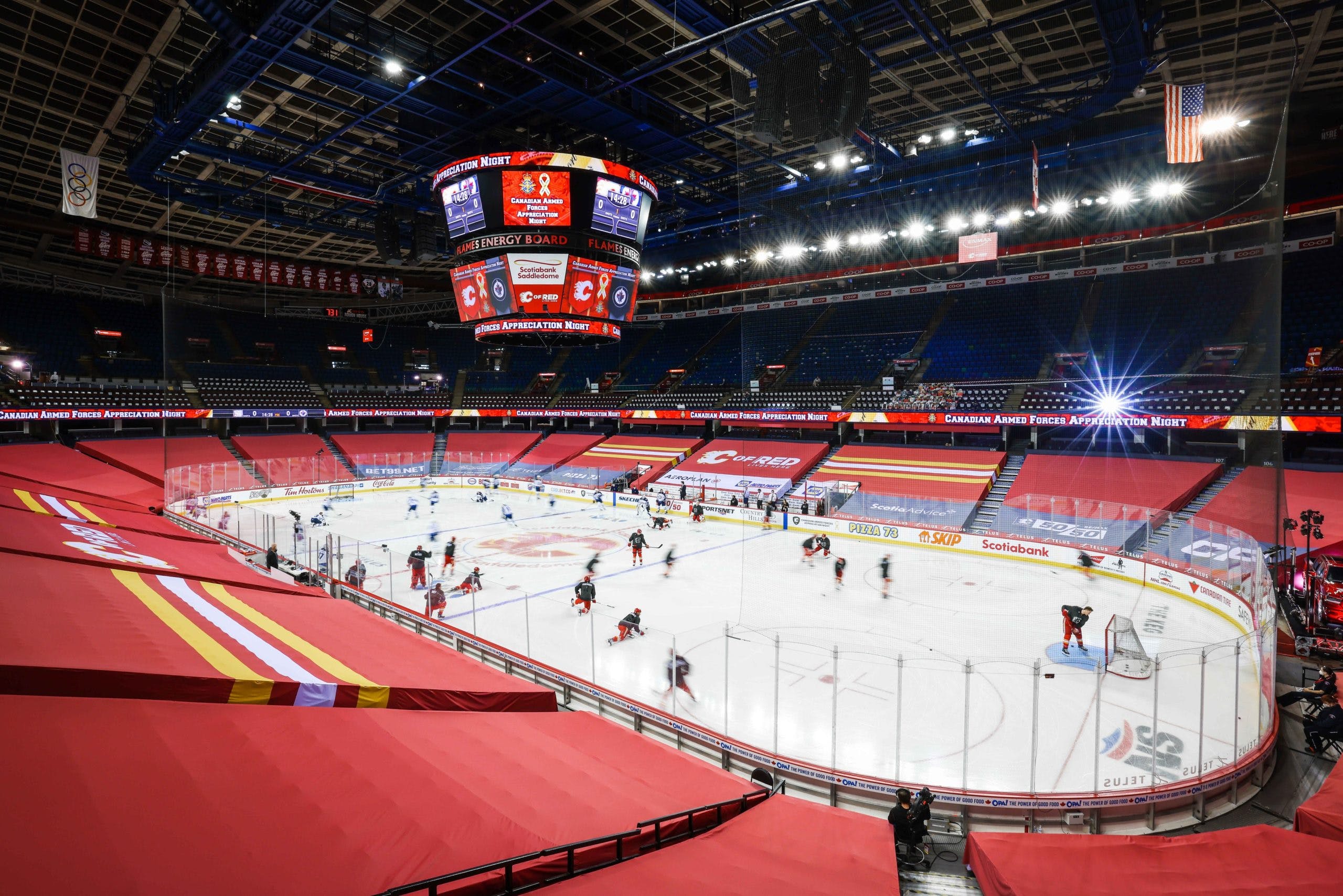 Photo credit: Sergei Belski-USA Today Sports
By Mike Gould
1 year ago
Comments
Leave it to the Calgary Flames to find a way to blow a four-goal lead during the playoffs… in the third period of a regular-season game.
Sunday was, in every respect, a great day for hockey. Three NHL playoff games dominated Canadian television screens and gripped viewers to the final shot.
The New York Islanders started things off by defeating the Pittsburgh Penguins in overtime by a 4-3 score. The Minnesota Wild and Vegas Golden Knights subsequently also went to overtime, with former Flames goaltender Cam Talbot making 42 saves in a 1-0 shutout victory.
The Tampa Bay Lightning and Florida Panthers seemed destined to continue the trend of playing bonus hockey. The back-and-forth affair featured five lead changes but somehow ended after only 60 minutes, with Brayden Point scoring the game-winning goal during the final 75 seconds of play.
Finally, just past 8:30 p.m. Mountain Daylight Time, the Flames and Vancouver Canucks faced off for the fourth (and last) game of Sunday’s slate. The North Division contest marked the first time in NHL history a regular-season game has taken place following the start of the playoffs.
Advertisement
Ad
Advertisement
Ad
Like the rest of Sunday’s games, the Calgary versus Vancouver matchup ended up being decided by just one goal. It didn’t always seem destined for that fate.
Matthew Tkachuk scored at the 7:17 mark of the second period to make it a 3-0 Flames lead. He fired a one-time shot past Canucks goaltender Braden Holtby for his 13th goal of the year (and his third in as many games).
Teeing up the one-time pass and registering the (unofficial) primary assist on the goal? Why, none other than Matthew Tkachuk.

Matthew Tkachuk finds his own rebound off the boards behind the net and slams it home! 3-0 Flames!#CofRed pic.twitter.com/rQXbYXZ3tk

Tkachuk’s tally followed up scores by Josh Leivo and Milan Lucic, the former of whom registered the primary assist on the latter’s 10th goal of the season.
Andrew Mangiapane scored 48 seconds later to increase the margin to 4-0. At this point, with 31:55 remaining in regulation time, the Canucks had an infinitesimal 0.02% chance of winning the game.
Advertisement
Ad
Advertisement
Ad
Vancouver defenseman (and former Flame) Travis Hamonic beat Jacob Markstrom to cut the lead to 4-1 with 13:21 elapsed in the middle frame; 42 seconds later, Mangiapane scored again to restore the four-goal advantage and re-establish Calgary’s 99.98% odds of victory.

Ultimately, Calgary turned that 99.98% figure into a perfect hundred. However, instead of doing so with ease and finesse, they fell backwards down a flight of stairs—hitting each subsequent step with a cartoonish, exaggerated bounce—before reaching the bottom and somehow landing upright by means of an uneasy somersault.
Tyler Graovac; Brock Boeser; J.T. Miller; Boeser, again. The Canucks scored four times in the third period to draw even with the Flames and force extra hockey in a game long considered merely obligatory. They demonstrated a level of resilience ill-befitting of a contest with such irrelevance amidst the NHL’s current array of offerings.
Advertisement
Ad
Advertisement
Ad
Calgary dominated much of the first 40 minutes of play, controlling the expected goals battle by a 1.35-to-0.52 margin at even strength. In the third period, that flipped to 0.82-to-0.38 in the Canucks’ favour. Vancouver scored two power play goals on four opportunities; Calgary failed to capitalize on any of its six chances.
To those familiar with the 2009–10 Flames, Sunday’s game hardly felt like uncharted territory. Back on Oct. 12, 2009, the Flames shot out to a 5-0 lead in the first period against the Chicago Blackhawks team responsible for their demise in the first round of the previous year’s playoffs.
Dustin Boyd, Eric Nystrom, Jarome Iginla, Rene Bourque, and Olli Jokinen all scored in the game’s first 12 minutes, chasing Chicago starter Cristobal Huet in the process. With future Stanley Cup-winning starter Antti Niemi now manning the pipes, the ‘Hawks responded with five goals of their own spread over the remaining two-and-a-half periods.
Advertisement
Ad
Advertisement
Ad
Just 26 seconds into overtime, Brent Seabrook sealed a 6-5 win for the eventual 2010 champions. While neither of the teams involved in Sunday’s back-and-forth affair will challenge for this season’s Stanley Cup, the Canucks very nearly repeated the feat of the team that once served as the franchise’s figurative “dragon.”
Instead, as they (and Calgary) did with the 2021 playoffs, the Canucks came up just short. Vancouver defenseman Alex Edler entered Sunday’s contest one goal shy of the 100th of his career; while he was the last player to touch the puck on the game’s overtime winner, he did so to deflect an Elias Lindholm passing attempt into his own net.

Lindholm leads all Flames skaters with 19 goals and 47 points in 54 games. He now has four game-winning goals this season and 16 in his three years since being traded to Calgary.
Advertisement
Ad
Advertisement
Ad

It’s a play on my last name, see.
These “Gould Stars” will be used to recognize Flames players who were noticeable—for reasons both good and bad—in the game being discussed. This is not a list of the three best players.

Josh Leivo forces the turnover and tallies a backhander beauty to open the scoring!#CofRed pic.twitter.com/VhYOPxkeph