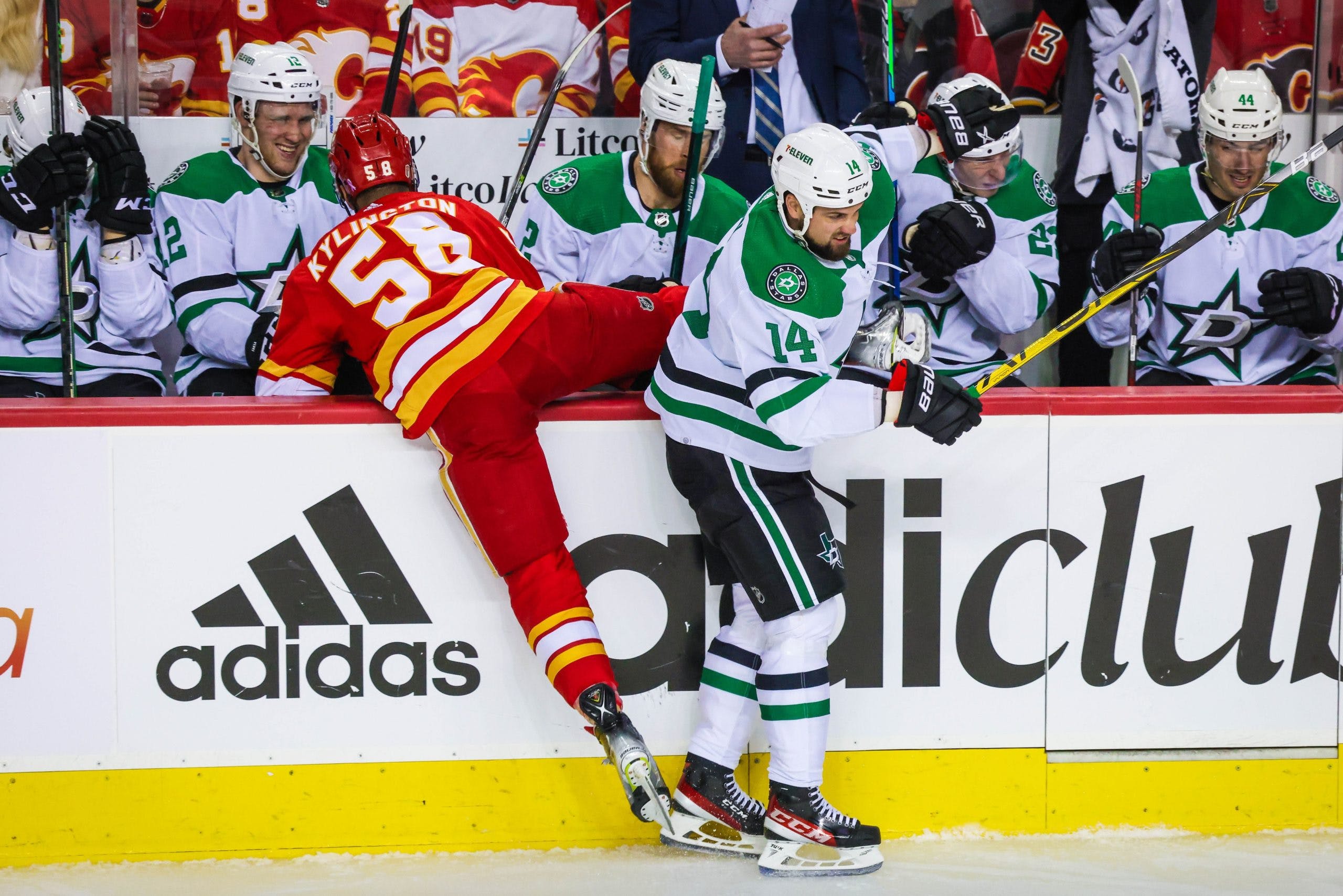 Photo credit: Sergei Belski-USA TODAY Sports
By Ryan Pike
8 months ago
Comments
On Tuesday night, the Calgary Flames (1-0; 1st place, Pacific Division) beat the Dallas Stars (0-1; 4th place, Central Division – 1st wildcard seed) in the first game of their Western Conference quarterfinal playoff series. Tonight, they’ll try to do it again. The Flames were full marks in a grinding, physical 1-0 victory. Can they match, or even improve upon, their Game 1 performance? Let’s find out!
The festivities begin at 8 p.m. MT. You can catch the game on CBC and Sportnet’s national feed in Canada (with Rick Ball and Greg Millen), TBS in the United States (with Dave Goucher and Drew Remenda), and over the airwaves on Sportsnet 960 The Fan (with Derek Wills and Peter Loubardias)!

Projected lines via Daily Faceoff:
@Johnny Gaudreau – @Elias Lindholm – @Matthew Tkachuk
@Andrew Mangiapane – @Mikael Backlund – @Tyler Toffoli
@Dillon Dube – @Calle Jarnkrok – @Blake Coleman
@Milan Lucic – @Trevor Lewis – @Brett Ritchie
@Noah Hanifin – @Rasmus Andersson
@Oliver Kylington – @Chris Tanev
@Nikita Zadorov – @Erik Gudbranson
@Jacob Markstrom [1-0, 0.00 GAA, 1.000 SV%] starts in net, backed up by @Daniel Vladar. The scratches are expected to be goaltender @Adam Werner, blueliners @Michael Stone and @Connor Mackey, and forwards @Ryan Carpenter and @Adam Ruzicka. No changes are expected from their Game 1 lineup or lines.
Advertisement
Ad
Advertisement
Ad
The Flames scored just once in Game 1, but they were carrying play before penalties took over the game in the second period. If they can keep things at even strength, and stay out of the box themselves, they should be in good shape given how strong they were in the opening period in that situation.
Keep an eye on @Noah Hanifin, who led the team with four shots on goal and played 25:21 in Game 1 with Rasmus Andersson ejected.

Projected lines via Daily Faceoff:
@Jason Robertson – @Roope Hintz – @Joe Pavelski
@Michael Raffl – @Jamie Benn – @Denis Gurianov
@Luke Glendening – @Tyler Seguin – @Vladislav Namestnikov
@Joel Kiviranta – @Radek Faksa – @Alexander Radulov
@Ryan Suter – @Miro Heiskanen
@Esa Lindell – @John Klingberg
@Joel Hanley – @Jani Hakanpaa
@Jake Oettinger [0-1, 1.02 GAA, .962 SV%] starts for the Stars, backed up by @Scott Wedgewood. The scratches are expected to be goalie @Adam Scheel, defencemen @Andrej Sekera and @Thomas Harley, and forwards @Jacob Peterson and @Marian Studenic. The Stars shuffled their lines up from how they began Game 1, aside from their top line: Glendening is now with Seguin and Namestnikov, Radulov joins Kiviranta and Faksa, and Raffl is now with Benn and Gurianov.
Advertisement
Ad
Advertisement
Ad
@Jamie Benn and @Tyler Seguin each had three shots in Game 1, leading the Stars’ stars, and Seguin had two of their three high-danger scoring chances. These two veterans will need to be sharp tonight, particularly with the Flames targeting the Robertson-Hintz-Pavelski trio with tougher match-ups and the new Stars lines spreading their veterans out more than the previous versions did.
The X-factor tonight, arguably for both sides: the physical game. Can Dallas use the body effectively without getting too caught up in extracurricular shenanigans? (They were really good at that in their 2020 playoff run, but can they replicate that against a talented Flames team?)