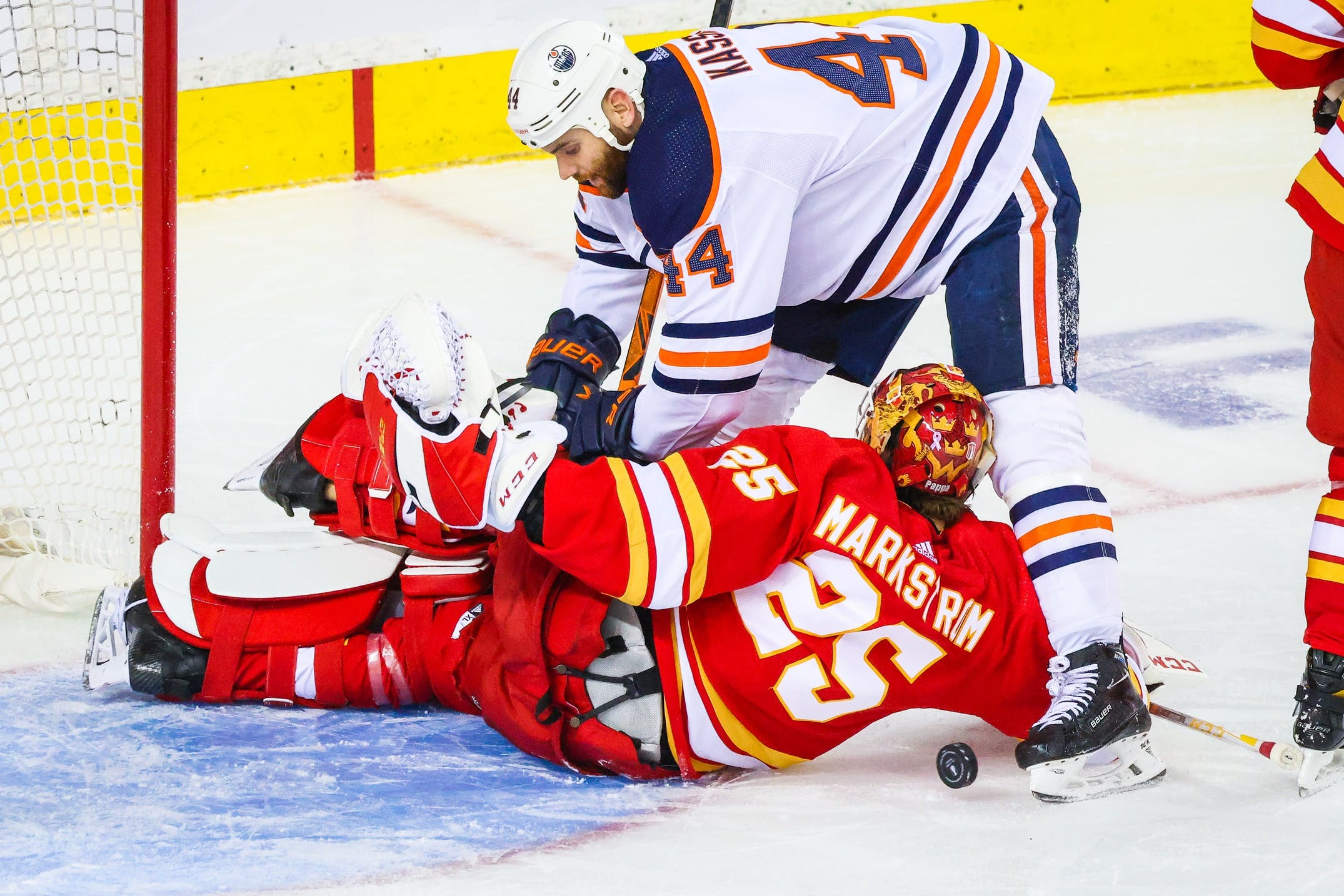 Photo credit: Sergei Belski-USA TODAY Sports
By Ryan Pike
8 months ago
Comments
In the first round, the Calgary Flames played a low-scoring, tight-checking, trench war of a hockey series against the Dallas Stars. The games were fairly entertaining, but admittedly could’ve featured more offensive highlights. Well, that wasn’t an issue in Game 1 of their series with the Edmonton Oilers.
In a track meet of a hockey game, the Flames held on for an 9-6 victory over the Oilers to take a 1-0 lead in this series.

The Flames got off to a hot start, if you’ll forgive the pun. 26 seconds into the opening period, Rasmus Andersson entered the Oilers zone and sent a bouncing pass towards Elias Lindholm in the high slot. Lindholm settled the puck down and fired a shot past Mike Smith (on the first shot of the game) to give Calgary a 1-0 lead.

25 seconds after that goal, the forecheck from Mikael Backlund, Andrew Mangiapane and Blake Coleman kept after loose pucks in the Oilers zone. Backlund ended up winning a puck battle below the goal line, then fed Mangiapane in the net-front area for a tap-in goal that made it 2-0 Flames.
Advertisement
Ad
Advertisement
Ad

A little bit later, Brett Ritchie made a nice individual effort on the forecheck that resulted in yet another goal. He knocked Evander Kane off the puck just inside the Oilers zone, then drove to the slot and fired a shot past Smith to make it 3-0 Flames.

Smith was pulled by the Oilers after three goals allowed on nine shots, replaced by backup Mikko Koskinen.
The Oilers broke up Jacob Markstrom’s shutout bid early. A crowd of players battled for the puck below the goal line in the Flames zone. The puck squirted out to Connor McDavid, and he waited out Markstrom and fired one past the netminder to cut the Flames’ lead to 3-1.

Shots were 19-7 Flames (10-4 Flames at five-on-five) and scoring chances 8-3 Flames in the first period. (High-danger chances were 5-1 Flames.)
Advertisement
Ad
Advertisement
Ad
The second period was just as wild as the opening period, featuring seven goals and some fairly blah goaltending from the Flames.
45 seconds into the period, another strong forecheck from the Backlund line led to turnovers, puck retrievals and general chaos. Rasmus Andersson’s initial shot was deflected on net but stopped by Koskinen, but Coleman grabbed the rebound and fired it past the Oilers netminder to give the Flames a 4-1 lead.

A little later, Coleman scored again. Trevor Lewis retrieved the puck as his linemates were going for a change. He passed it to Noah Hanifin at the point and his low shot was slightly tipped by Coleman, just enough to elude Koskinen and give the Flames a 5-1 lead.

A little later, though, Edmonton answered back. McDavid stickhandled the puck into the Flames zone. Everyone in red seemingly was distracted by his wizardry, leaving Evan Bouchard all alone near the slot area for a quick pass and shot and goal to cut Calgary’s lead to 5-2. Zach Kassian ignited a scrum after the goal, including punching Andersson in the face in a manner that earned Kassian a roughing minor.
Advertisement
Ad
Advertisement
Ad

connor mcdavid finds evan bouchard who makes it a 5-2 game. zack kassian gets called for roughing after the whistle. pic.twitter.com/gdLDLqyJMP

On the ensuing power play, Matthew Tkachuk redirected a Johnny Gaudreau shot from the left side of the zone past Koskinen to give the Flames a 6-2 lead.

But the Oilers fought back and chipped away at Calgary’s lead. Markstrom gave up one he probably wants back, as Zack Hyman fired a shot from Markstrom’s right – just outside of the face-off dot – that found a hole in the netminder’s positioning and made it a 6-3 game.

Nikita Zadorov broke his stick at the offensive blueline a little later, allowing the Oilers to regain the puck and get a rush chance. The Flames did a nice job covering up for Zadorov not having a stick and prevented a good scoring chance by the Oilers, but the Flames couldn’t box out the Oilers and Hyman collected the puck, swung around from behind the net, and beat Markstrom through traffic in all the confusion to cut the Flames lead to 6-4.
Advertisement
Ad
Advertisement
Ad

And with 38 seconds left in the second period, the Oilers made it a one goal game. The Oilers managed to clear their zone and the Flames couldn’t collect a loose puck in front of their bench, allowing Leon Draisaitl to grab the puck and hit the Flames’ zone with speed. He fired a shot past Markstrom off the rush to make it a 6-5 hockey game.

Shots were 21-11 Flames (19-9 Flames at five-on-five) and scoring chances were 16-7 Flames in the second period.
The Oilers tied the game up early in the third period. McDavid drove the net and Markstrom laid out to make a nice save, but Kailer Yamamoto jumped all over the juicy rebound and put it into the Calgary net to tie the game up at 6-6.
Advertisement
Ad
Advertisement
Ad

YES, WE HAD A TIE GAME! 🍠#StanleyCup | #BattleofAlberta | #LetsGoOilers pic.twitter.com/iNeqrAvifZ

But the Flames answered back. A couple shifts spent in the offensive zone eventually resulted in Mangiapane having the puck behind the Oilers’ net and finding Andersson sneaking in from the point. Andersson beat Koskinen top corner to give the Flames a 7-6 lead.

The Flames added to their lead a little later off a wacky play. The Oilers cleared their zone, but a pass at the defensive blueline went off Jesse Puljujarvi’s skate and back into the Oilers’ zone, where Tkachuk grabbed the puck, went in on Koskinen and fired the puck past him to give the Flames an 8-6 lead.

Tkachuk added an empty netter to complete his hat trick and make this a 9-6 Flames victory.
Shots were 10-8 Oilers (7-6 Oilers at five-on-five) and scoring chances were 7-4 Flames in the third period.
Advertisement
Ad
Advertisement
Ad

This game was nuts, and way closer than it should’ve been given which team carried play. The Flames were way better at puck possession and shot (and dangerous shot) generation in the offensive zone. They were leaky defensively, though, and in their own zone their puck luck resembled what they got for stretches in the Dallas series: their mistakes away from the puck resulted in Oilers goals.
Markstrom was also nowhere near as sharp as we’ve seen him in the past seven games, and nowhere near how sharp the Flames needed him to be. But the Flames were able to out-score their challenges, at least in Game 1.

Let’s give it to Mangiapane. He led the Flames with three points, including a really nice set-up on Andersson’s go-ahead goal in the third period.
Advertisement
Ad
Advertisement
Ad
But a lot of Flames looked good (at least offensively). Tkachuk, Gaudreau and Coleman were all really good.

Andersson’s go-ahead goal was big, but the Flames had a pair of big penalty kills while nursing that third period lead and came up big on those kills to maintain their lead.

The @NHLFlames scored twice in the opening 51 seconds and established an NHL record for fastest two goals from the start of a playoff contest, besting the Penguins to start Game 5 of the 1993 Division Finals. #StanleyCup #NHLStats: https://t.co/0S0WcLVuoQ pic.twitter.com/Bt2iZ6wB8v

This was the highest scoring Calgary/Edmonton playoff game in NHL history.

There was some confusion after Oliver Kylington took a minor penalty, and then Kane and Tkachuk also took penalties at the same stoppage. Tkachuk left the penalty box first, despite the coincidental penalties with Kane. Well, turns out it was “captain’s choice.”

NHL Rule 16.2. The captain will tell the official who comes out first when two players from same team have minor expire at same time. pic.twitter.com/U5bCXbDIor