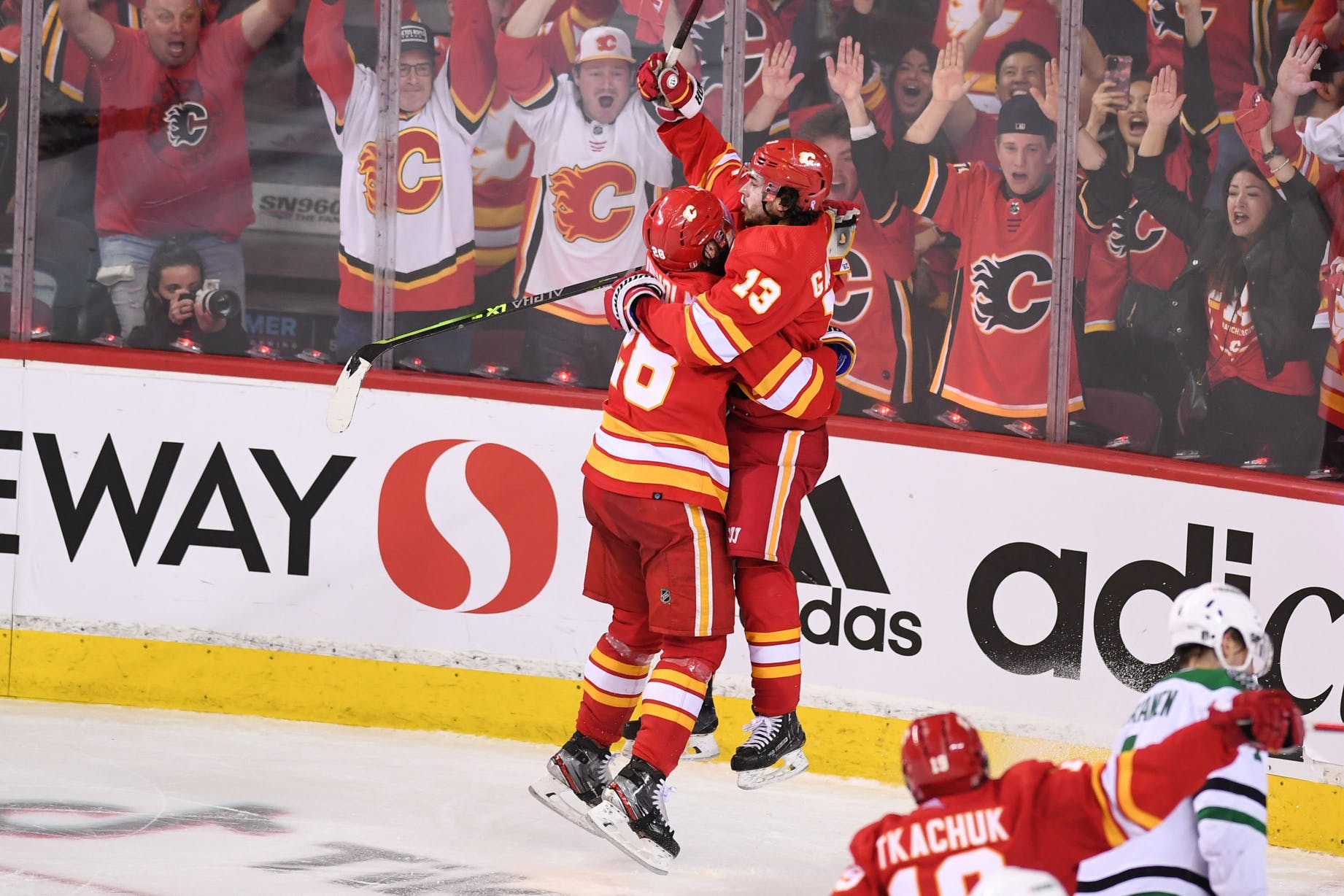 Photo credit: Candice Ward-USA TODAY Sports
By Ryan Pike
8 months ago
Comments
After six tight-checking, hard-fought hockey games, the Calgary Flames and Dallas Stars needed all seven games to settle their first round Stanley Cup playoff series. And in keeping with how this series has been, they also required extra time to decide who moved on to the second round.
Johnny Gaudreau scored an overtime game-winner with 4:51 in overtime to give the Flames a 3-2 victory and a seven game victory.

Dallas opened the scoring 40 seconds in, on the first shot of the game. The Stars dumped the puck in. Noah Hanifin tried to play it up the boards but it hit Stars’ player’s skates, and bounced right to Tyler Seguin. Seguin fed Jamie Benn all alone in the high slot and his wrister beat Jacob Markstrom to give Dallas a 1-0 lead.

Only took one shot to get us started 💥

The Flames responded with a ton of pressure in the Stars zone, with the shots being 13-2 Flames at one point. But the Stars pushed back later on in the period and gave the Flames some scares.
Shots were 17-8 Flames (15-8 Flames at five-on-five) and scoring chances were 12-7 Flames in the first period. (High-danger chances were 4-4.)
Advertisement
Ad
Advertisement
Ad
The Flames continued their push early in the second period and eventually got rewarded. The third line had a superb shift in the Stars zone, battling and regaining loose pucks a few times and cycling the puck. Eventually, Oliver Kylington fired a wrist shot from the point that was tipped by Tyler Toffoli past Jake Oettinger and tied the game up at 1-1.

31 seconds later, as Beasley was announcing the Flames goal in the arena, the Stars got their lead back. Miro Heiskanen led the rush into the Flames zone, and then Dallas executed a really nice passing sequence from him to Jason Robertson to Joe Pavelski to set up a one-timer for Vladislav Namestnikov. The one-timer beat Markstrom to give the Stars a 2-1 lead.

But the Flames responded. After a pair of overlapping penalties, the Flames had a short man advantage. They failed to score on the advantage, but as the penalty was winding down, Jacob Markstrom sprung the Flames into the Stars zone. Johnny Gaudreau took the pass and cut to the middle of the ice, then passed to Matthew Tkachuk. Tkachuk wired a shot that beat Oettinger high short-side and tied the game up at 2-2.
Advertisement
Ad
Advertisement
Ad

It's none other than Matthew Tkachuk (@TKACHUKycheese_) who ties up #Game7. 🧀 #StanleyCup

Nikita Zadorov was upended heading towards the net, and crashed into net and boards. He was shaken up, but stayed in the game. Kylington lost an edge a little later, crashed into the side boards at the Flames blueline. He skated to the bench in a ton of pain and headed down the tunnel, but he returned for the third period.
The Flames got several more chances as the period wound down, but couldn’t get anything more past Oettinger in the second period.
Shots were 26-4 Flames (23-3 Flames at five-on-five) and scoring chances were 23-2 Flames in the second period. (High-danger chances were 9-0 Flames.)
The third period was, as you would expect given the teams and situation, tight-checking, structured, and quite tense. Neither team scored, though both had some good looks. Markstrom made a fabulous save on a breakaway chance by Jacob Peterson.
Advertisement
Ad
Advertisement
Ad
Shots were 11-9 Stars (all at even strength) and scoring chances were 8-7 Stars in the third period. (High-danger chances were 3-2 Flames.)
This game (and series) required overtime to decide.

Tyler Seguin was called for hooking midway through overtime, giving the Flames a power play, but the Flames couldn’t bury it. But after spending much of the first chunk of overtime in their own zoen, the Flames piled up chances and Gaudreau scored from a bad angle on Oettinger to give the Flames a 3-2 win.

MATTHEW TKACHUK!!! FINALLY!!! Ties this game off a beautiful feed from Marky and Johnny. 🔥🔥 #Flames pic.twitter.com/iQbJIT4VgW

Shots were 15-5 Flames (7-4 Flames at five-on-five) and scoring chances were 8-5 Flames in overtime.

The Flames didn’t play a perfect hockey game, but aside from a few key lapses in their own zone they were quite good. The details of their game in all three zones were generally quite good, and they put a lot of rubber on Oettinger throughout this game.
Advertisement
Ad
Advertisement
Ad
They weren’t great early in overtime, but they got their wits about them after Dallas’ big push and then took over the game. And that, along with a bad-angle, was enough to solve Oettinger.

There were a lot of really good performances by the team in red in this game. Among those that stood out: Mikael Backlund, Calle Jarnkrok, Johnny Gaudreau, Matthew Tkachuk and Jacob Markstrom.
Let’s give this to Gaudreau, since he had the winner.

Gaudreau’s overtime winner, for sure.

With usual alternate captains Sean Monahan and Chris Tanev not dressed tonight, Johnny Gaudreau inherited their A. The other two alternates were the regulars, Mikael Backlund and Matthew Tkachuk.

To give you an idea of just how late a scratch Roope Hintz was, this is the printed roster sheet handed out in Calgary that showed Hintz in and Denis Gurianov out. pic.twitter.com/S5Hg04TjJg

26 shots in the second period for Calgary.

That shatters their prior playoff record of 22 from April 1988 vs. Los Angeles.#Flames and #TexasHockey tied 2-2 after 40 minutes in game seven.