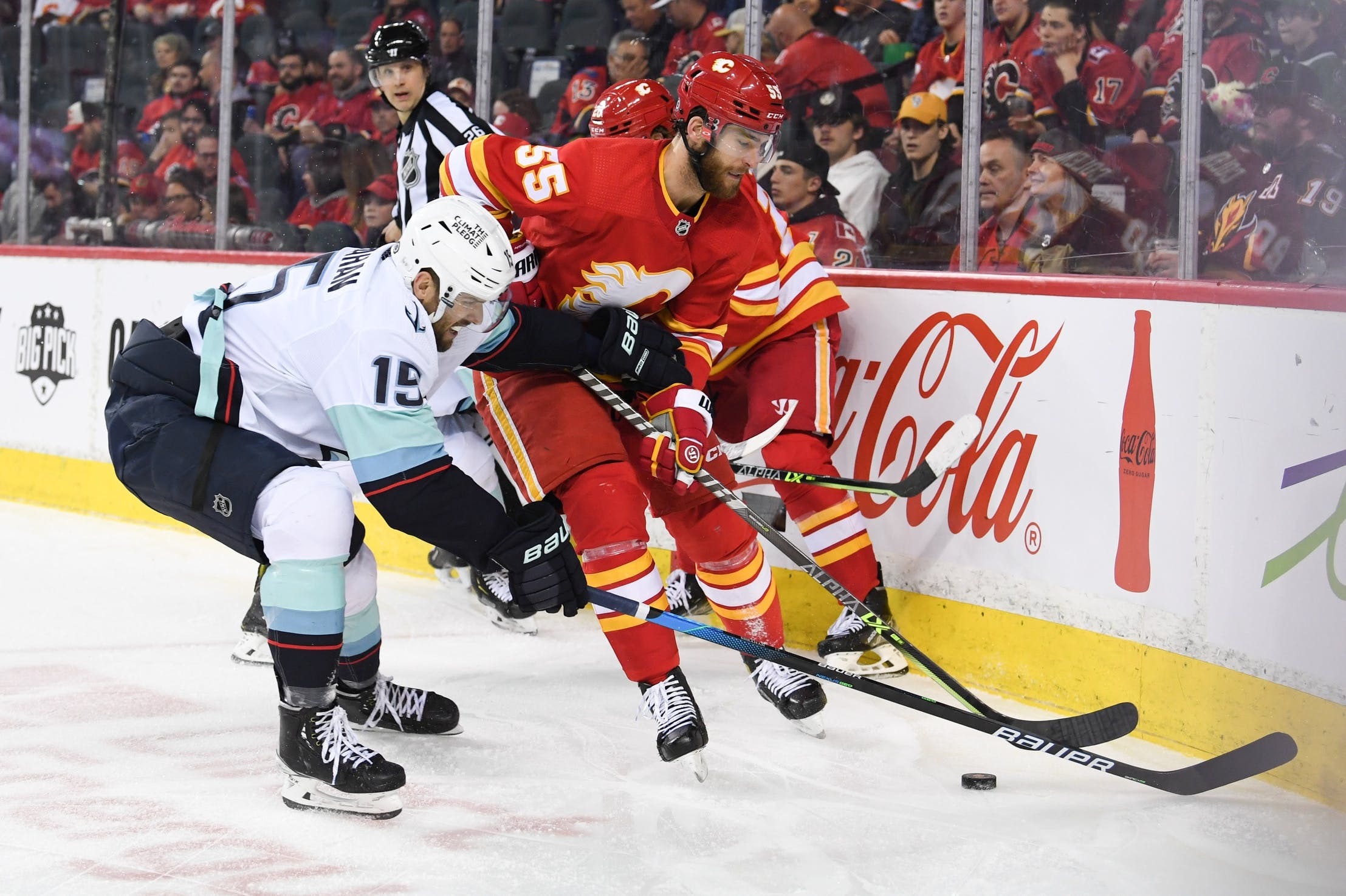 Photo credit: Candice Ward-USA TODAY Sports
By Ryan Pike
7 months ago
Comments
The Calgary Flames weren’t at their usual best for the first two periods of Tuesday’s game with the Seattle Kraken. But the Flames made adjustments after two periods and then run roughshod over the visiting Kraken.
Four third period goals powered them to a 5-3 victory over Seattle, extending their winning streak to five games.

Seattle opened the scoring in the first period. They moved the puck well and caught the Flames on their heels a bit in the defensive zone. Rookie Matty Beniers, in his first NHL game, found Ryan Donato to Jacob Markstrom’s left. Connor Mackey couldn’t deflect the pass or block Donato’s shot, and it beat Markstrom to give the Kraken a 1-0 lead.
But the Flames answered back fairly quickly. Elias Lindholm hit the offensive zone with speed, then passed back to Rasmus Andersson, who passed back to Noah Hanifin. With a few layers of bodies, Hanifin’s point shot was tipped in by Matthew Tkachuk to make it a 1-1 hockey game.
Advertisement
Ad
Advertisement
Ad

Shots were 12-8 Flames (8-8 at five-on-five) and scoring chances 11-7 Kraken in the first period.
Seattle played really well in the second period and were rewarded for their compete level and winning battles.
Once again, the Kraken did a nice job at winning battles and got the Flames chasing in their own zone – a sequence that began with Mackey losing a puck battle along the wall and then kept spiralling. Yanni Gourde got the puck behind the Flames net and found Victor Rask out front, and Rask beat Markstrom to make it 2-1 Seattle.
The Flames drew a penalty and both of their power play units got all kinds of chances, but they couldn’t score. A little after the PP expired, the Flames hung Chris Tanev, Nikita Zadorov and Brett Ritchie out to dry with a bad line change that gave Seattle a four-on-three rush. Adam Larsson finished off a passing sequence to give Seattle a 3-1 lead.
Advertisement
Ad
Advertisement
Ad
Shots were 9-7 Flames (7-5 Kraken at five-on-five) and scoring chances 12-4 Kraken in the second period.
The Flames put Daniel Vladar in net for the third period, likely in an effort to shake the team up, and they also shuffled their forward lines. it worked!
Connor Mackey took a penalty, but then Seattle took a couple quick penalties. On the ensuing four-on-three advantage, Tkachuk attempted a cross-crease pass to Lindholm but Larsson blocked it. The puck went back to Tkachuk and he beat Chris Driedger to cut the Kraken lead to 3-2. Johnny Gaudreau earned his 100th point of the season with an assist on that goal.

The Kraken got a scoring chance right after the Tkachuk goal but Vladar stopped Karson Kuhlman. The game went the other way and the Flames eventually tied things up. Mackey’s point shot was stopped, but the rebound created all kinds of havoc, ending with Andrew Mangiapane jamming in a loose puck out front to tie the game at 3-3.
Advertisement
Ad
Advertisement
Ad

The Flames drew another penalty later in the period and the second unit cashed in. Michael Stone set up Hanifin and his one-timer from Driedger’s left found iron and then the net to give the Flames a 4-3 lead.

The Kraken pulled Driedger late for the extra attacker, but they couldn’t find the equalizer. Gaudreau set up Tkachuk for the empty net goal to complete his hat trick and give the Flames a 5-3 victory.

The Flames were definitively the second-best team on the ice in the first 40 minutes of this game. They weren’t bad, necessarily, but they were sloppy and they lost puck battles. Switching goalies and mixing up the forward group really did a nice job to put some urgency in their game.
Advertisement
Ad
Advertisement
Ad
Once they found their urgency, they found the net. Frequently.

We’ve done this before, but let’s give this jointly to the top defensive pairing of Hanifin and Andersson. Both had multi-point evenings and they were really solid for their team.

The Flames scored twice in the span of 2:23 in the early third period, with a key save by Vladar in-between. It was a lot of strong execution for the Flames right when they needed it, and it swung the game.

Tkachuk’s hat trick was just the second of his NHL career.

#Flames beat Seattle 5-3 at the Saddledome for their fifth straight win. That’s just their second comeback when trailing after two periods this season.

The other was February 1st in Dallas where they also trailed 3-1 and Dan Vladar started the third. Vladar up to 11-5-1.

The Flames (45-19-9) are back in action on Thursday night when they welcome Mark Stone and the Vegas Golden Knights to town.
The Flames’ magic number to clinch a playoff berth is down to 1.5. Any combination of Flames wins or Los Angeles losses adding up to 1.5 punches Calgary’s ticket to the post-season. (A Flames OT loss is 0.5 wins, a Kings OT loss is 0.5 losses.)