Advertisement
Ad
Flames Post-Game: The streak ends, Flames get back to .500 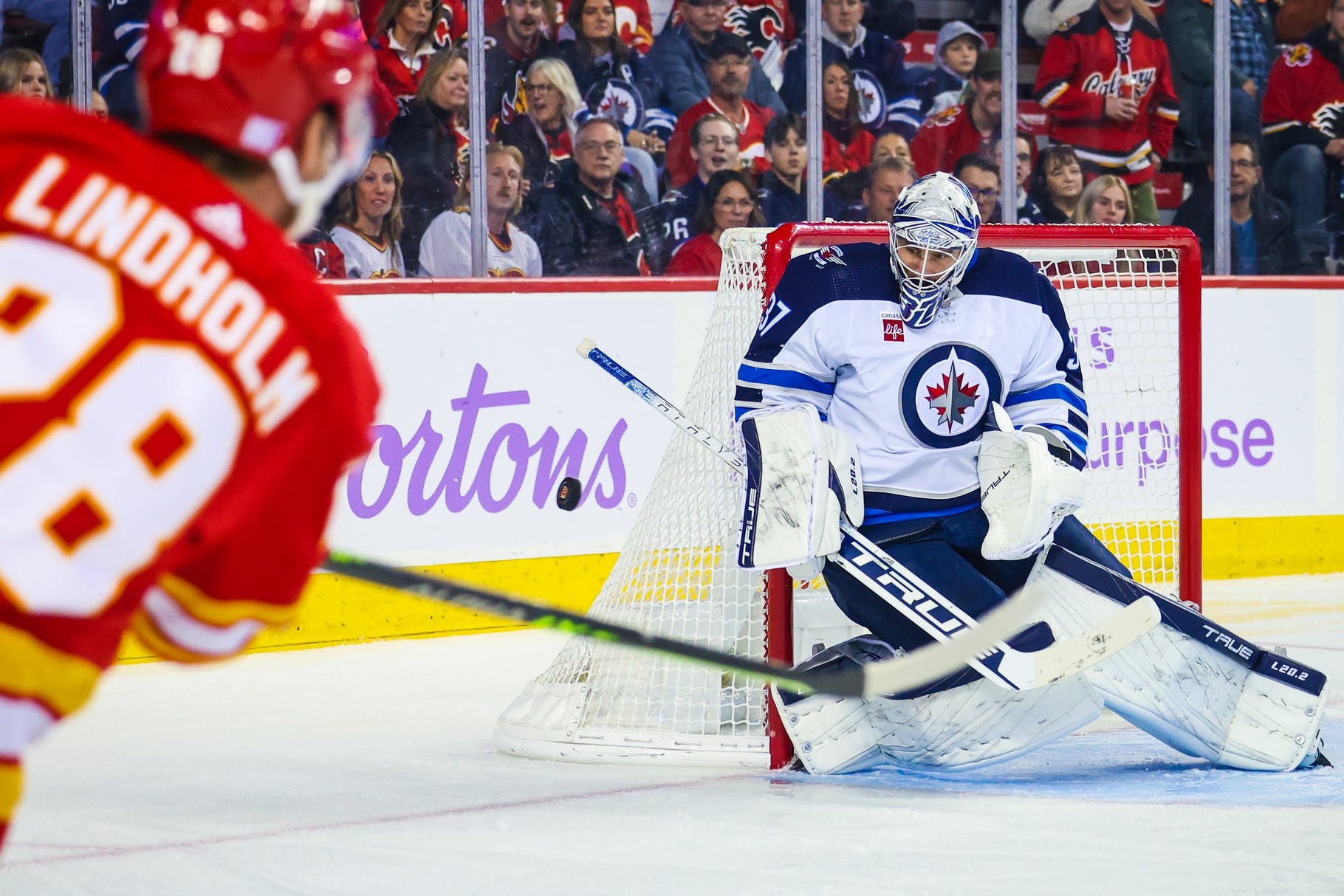 Photo credit: Sergei Belski-USA TODAY Sports
By Ryan Pike
25 days ago
Comments
Welcome to our game day content brought to you by NHL odds site Betway!
The Calgary Flames have been playing pretty well of late, but finding ways to lose close games. Well, on Saturday night against the Winnipeg Jets, while not playing a flawless 60 minutes of hockey, they found a way to win. On the back of some really good goaltending and a timely shorthanded goal, the Flames beat the Winnipeg Jets by a 3-2 score.
The Flames have snapped their seven game losing streak.

The Flames looked good early and opened the scoring in the first few minutes of the hockey game. Elias Lindholm won a face-off in the offensive zone and cycled the puck back to the point. Adam Ruzicka got the puck on the side boards and threw it into the net-front area, where Lindholm used his stick to make a quick deflection that caused the puck to careen into Connor Hellebuyck’s five-hole and into the net. That gave the Flames a 1-0 lead.
Advertisement
Ad
Advertisement
Ad

Elias Lindholm gets the #Flames on the board with a nice tip! pic.twitter.com/xzy6yCjtjG

The Jets pressed afterwards and the Flames saw Jacob Markstrom make a bunch of good saves. However, eventually the Jets tied it up. Josh Morrissey intercepted an attempted clear from Chris Tanev, then passed to Neal Pionk. Pionk’s point shot glanced off Connor Mackey’s leg and changed direction, completely fooling Markstrom and tying the game 1-1.

Chris Tanev with an uncharacteristic turnover up the middle of the ice.

Winnipeg shoots it and it deflects off Connor Mackey and in.

But late in the period, the Flames got the lead back. Rasmus Andersson made a nice pass to spring Elias Lindholm into the offensive zone. Lindholm spun off an attempted check by Mark Schiefele, then put a pass between Dylan DeMelo’s legs right to Adam Ruzicka. Ruzicka redirected Lindholm’s pass past Hellebuyck to give the Flames a 2-1 edge.
Advertisement
Ad
Advertisement
Ad

First period shots were 10-9 Flames (10-8 Flames at five-on-five) and five-on-five scoring chances were 8-8 (high-dangers were 4-4).
The Jets tied things up early in the second period during a stretch of four-on-four play. Morrissey made two really nice passes. The first sent Mason Appleton into the Flames zone by himself and he used his speed to get behind the blueliners and wait for reinforcements. When they arrived, a couple nice passes led to an attempted double-team of Morrissey. Morrissey put a pass between two defenders (and Markstrom) to find Pierre-Luc Dubois at the back door for the tap-in to tie the game up at 2-2.
Advertisement
Ad
Advertisement
Ad

Pierre-Luc Dubois ties the game at 2-2.

Pretty incredible movement and passing by the Jets in the Flames zone. pic.twitter.com/MWFrZHKFny

The Flames got their lead back late in the period, scoring shorthanded. The Flames blocked a Jets shot off a face-off, then Mikael Backlund flipped the puck out of the zone. The Jets didn’t chase the puck down, so Backlund did so himself, then found Trevor Lewis on the rush with him with a pass. Lewis drove the net and beat Hellebuyck backhanded to give the Flames a 3-2 lead.

Second period shots were 14-10 Flames (9-4 Jets at five-on-five) and five-on-five scoring chances were 9-1 Jets (high-dangers were 6-1 Flames).
Advertisement
Ad
Advertisement
Ad
The Flames shortened their bench in the third period, largely shelving Connor Mackey, Brett Ritchie, Kevin Rooney and Dillon Dube. But they managed to defend fairly well, avoiding too many turnovers or high-danger chances against.
The Jets pulled Hellebuyck late for the extra attacker, but couldn’t draw even. The Flames held on for a 3-2 victory.
Third period shots were 11-4 Flames (11-2 Flames at five-on-five) and five-on-five scoring chances were 9-2 Flames (high-dangers were 3-0 Flames).

The Flames didn’t play a perfect hockey game. Heck, they were out-chanced pretty handily in the second period. But their penalty killing was really sharp and they did a good enough job at being opportunistic at five-on-five when they did get chances.
There’s definite room for improvement, but for the first time in eight games (and in the month of November), they got the desired result.
Advertisement
Ad
Advertisement
Ad

Let’s give it jointly to the first line: Ruzicka, Lindholm and Tyler Toffoli. They were really good and consistently made life difficult for the Jets in the offensive zone.

Blake Coleman and Jacob Markstrom both took penalties late in the second period, resulting in 1:18 of a Jets two-man advantage straddling both sides of the second intermission. Faced with a big chance for the opponent to tie things up, the Flames had a superb penalty kill that managed to take away a lot of Winnipeg’s momentum.

After missing five games with an upper body injury, Chris Tanev returned to the Flames’ lineup. Also returning to action? Sportsnet play-by-play ace Rick Ball, who had been absent for a few weeks due to a health issue.
There was just 8:15 of five-on-five hockey played in the second period.
Advertisement
Ad
Advertisement
Ad