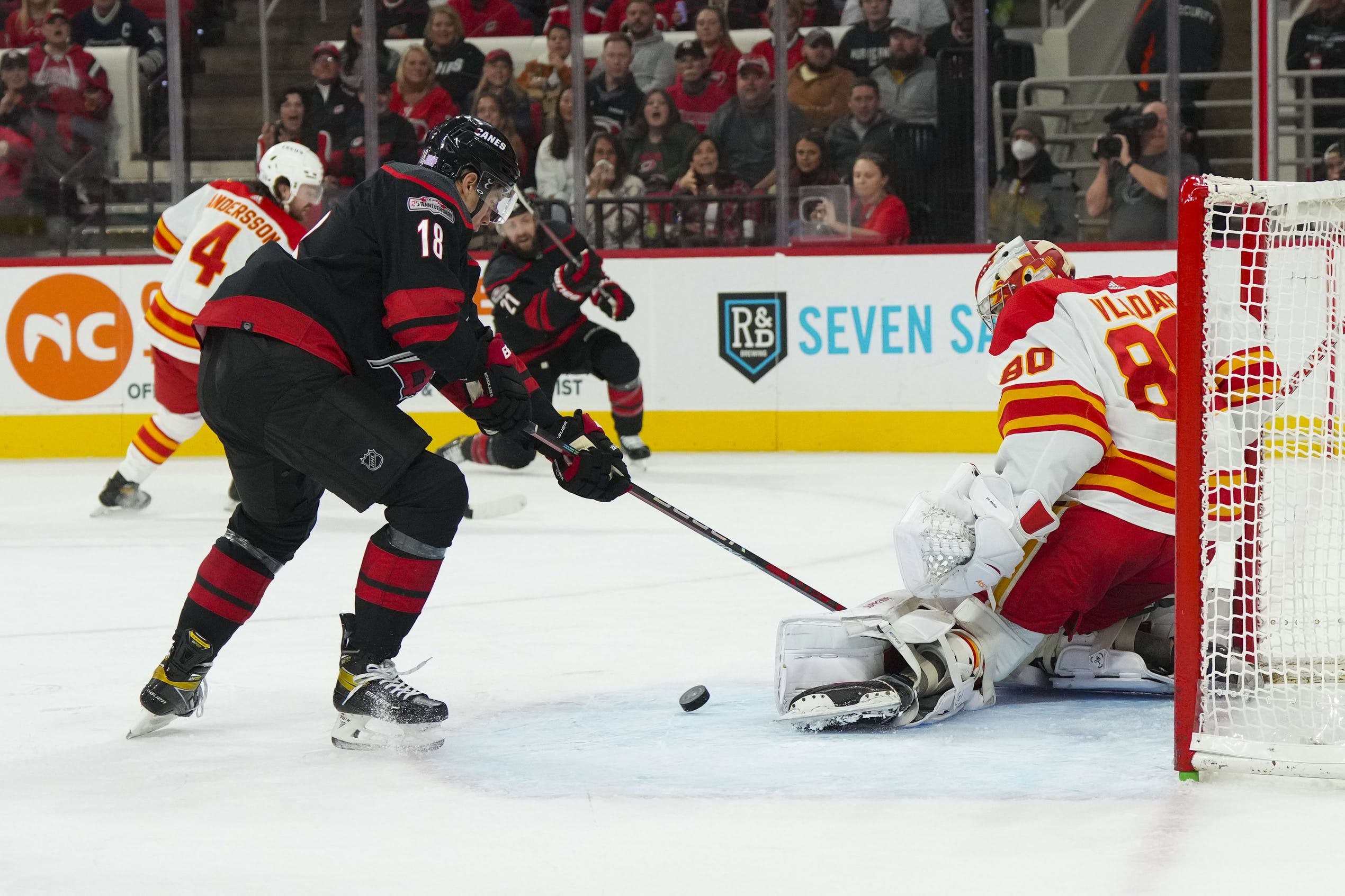 Photo credit: James Guillory-USA TODAY Sports
By Ryan Pike
2 months ago
Comments
Welcome to our game day content brought to you by NHL betting site Betway!
The Calgary Flames headed to scenic Raleigh, North Carolina on Saturday afternoon to play the Carolina Hurricanes in the sixth and final game of their lengthy road trip. As has been the case frequently, the Flames played pretty well all things considered. but they did just enough things poorly – and at the wrong times – to find a way to lose a close game.
The Flames lost to the Hurricanes by a 3-2 score.

The Hurricanes were all over the Flames early, as the visitors seemed to have trouble with Carolina’s speed and tenacity.
Dan Vladar made a bunch of early saves. On one such flurry, Dillon Dube made a blind pass from the side boards in the defensive zone that was intercepted by Brent Burns. Burns fed Seth Jarvis beside the net and Jarvis buried the feed to give Carolina a 1-0 lead.
Advertisement
Ad
Advertisement
Ad

Brent Burns picks off the errant pass and sets up Seth Jarvis in tight for the opening tally!#LetsGoCanes pic.twitter.com/8oUkCNLBVO

But after taking a fairly undisciplined minor earlier in the period, Nikita Zadorov sent the Flames to a power play and they cashed in. The first unit didn’t generate a lot, but the second unit did. Michael Stone fired a shot on net that was stopped by Antti Raanta, but the rebound got booted out right into the net-front area and Adam Ruzicka jammed it into the open net to tie the game at 1-1.

Adam Ruzicka scores on the powerplay and ties the game.

Michael Stone is already making an impact in his return to the lineup. pic.twitter.com/8LTZXlcszD

First period shots were 14-8 Hurricanes (14-6 Hurricanes at five-on-five) and five-on-five scoring chances were 11-7 Hurricanes (high-dangers were 7-3 Hurricanes).
Stone took an early penalty in the second period and the Hurricanes took advantage to re-take the lead. Some nice passing and offensive zone cycling on the man advantage ended with Stefan Noesen drawing Noah Hanifin down low in the zone, opening a cross-slot passing lane. He found Martin Necas on the far side, and Necas put the feed past Vladar to give the Hurricanes a 2-1 lead.
Advertisement
Ad
Advertisement
Ad

But the Flames hung in there despite getting out-chanced, and a Hurricanes defensive lapse led to a tying goal. Both Carolina defenders were engaged in the offensive zone, which allowed Tyler Toffoli to find a quiet patch of ice in the neutral zone. Jonathan Huberdeau’s outlet pass sent Toffoli in on a breakaway, and he beat Raanta high to tie the game at 2-2.

Jonathan Huberdeau to Tyler Toffoli to the back of the net.

Second period shots were 9-8 Hurricanes (8-7 Hurricanes at five-on-five) and five-on-five scoring chances were 10-5 Hurricanes (high-dangers were 2-1 Flames).
Both sides played structured hockey in the third and waited for the other team to make a mistake. Blake Coleman took a minor midway through the period. On the ensuing Hurricanes power play, Brett Pesce accepted a pass from Sebastian Aho and beat Vladar over his pad short-side to give Carolina a 3-2 lead.
Advertisement
Ad
Advertisement
Ad

The Flames tried to generate a game-tying goal, but the Hurricanes defended well and the visitors just didn’t have enough left in the tank to tie things up, even after pulling Vladar for the extra attacker. Carolina won this one by a 3-2 score.
Third period shots were 10-4 Hurricanes (8-4 Hurricanes at five-on-five) and five-on-five scoring chances were 6-4 Hurricanes (high-dangers were 2-2).

This game felt a lot like the game against Washington on Friday afternoon. The Flames were on their heels early on but eventually settled in. They did a lot of good things and had some offensive looks, but the Hurricanes had the puck more and did smarter things with it, while the Flames still struggled at times with puck management. The Hurricanes had a distinct advantage in shots (33-21), five-on-five scoring chances (31-16) and high-danger chances (12-6).
Advertisement
Ad
Advertisement
Ad
The Flames hung around in this game, and they were able to do that because their goaltender, Vladar, was superb throughout this game and gave them a fighting chance.

The answer is Vladar, and the next-best performance wasn’t particularly close. He made 30 saves and stopped 28 of 29 shots he faced at even strength.

The Flames entered the third period with a fighting chance to win the game. Instead, they allowed their second power play goal against of the game.

Michael Stone returned to the lineup after missing 10 games due to injury. His return pushed Dennis Gilbert to the press box.

The Flames (9-9-3) are headed home. They fly home on Saturday night, have an off day on Sunday, and then begin to prepare to host Matthew Tkachuk and the Florida Panthers on Tuesday night.
Advertisement
Ad
Advertisement
Ad