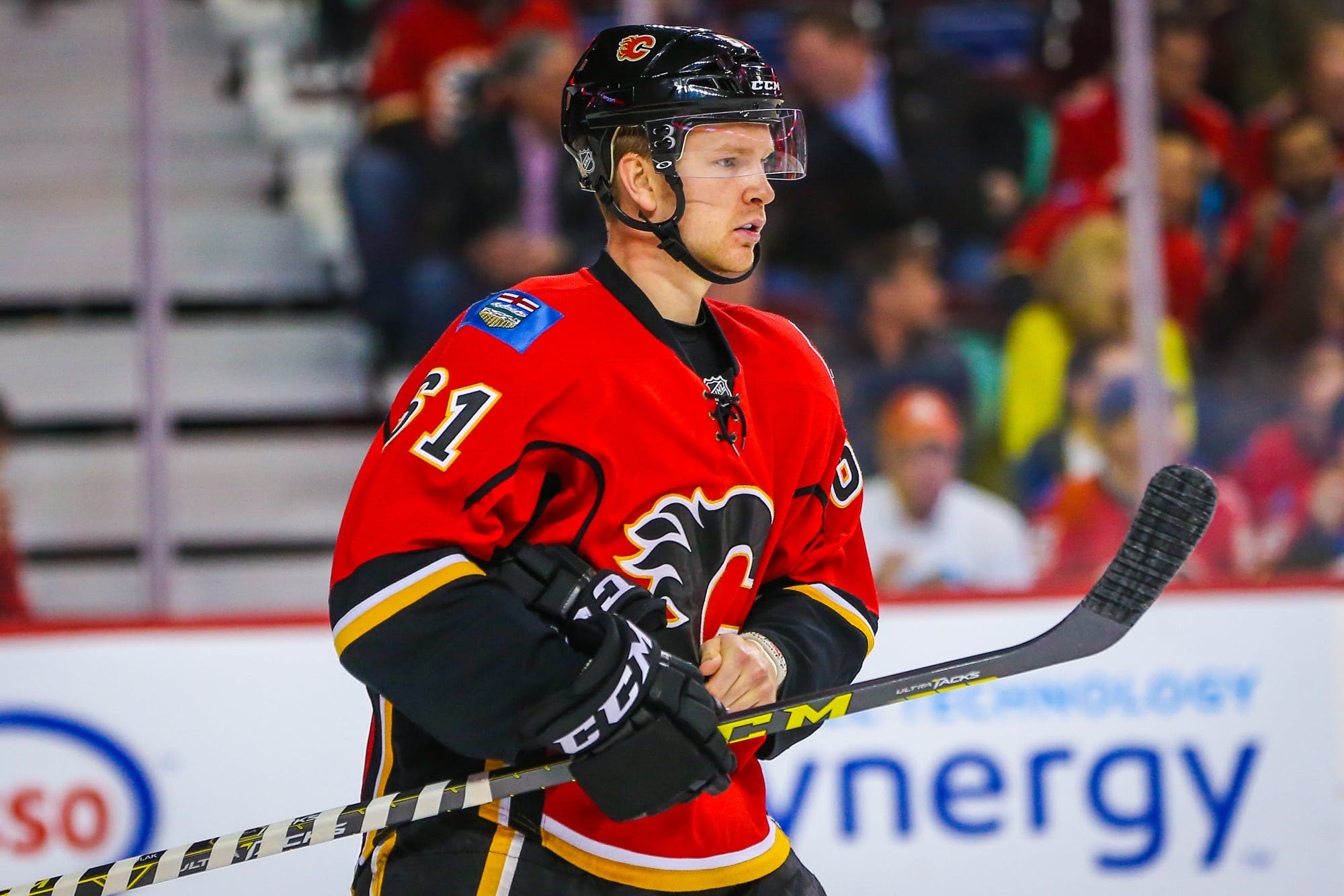 Photo credit: Sergei Belski-USA TODAY Sports
By Mike Gould
1 year ago
Comments
The Calgary Flames have made it to three Stanley Cup Finals since relocating from Atlanta in 1980.
While the Flames beat the Montreal Canadiens in the 1989 championship series, they lost to the Tampa Bay Lightning in 2004 and fell against the Habs in 1986.
Now, Calgary’s two finals opponents will face off against each other for the Stanley Cup. Tampa Bay, which defeated the Dallas Stars in the 2020 final, will try to capture a second consecutive title; Montreal, in its first final since 1993, will push for its 25th championship.
Both these teams feature personnel with strong ties to the Flames organization. While the Canadiens—the sole remaining representative based north of the 49th parallel—may earn recognition from some as being “Canada’s team,” can they honestly claim to have a stronger connection with Calgary? Let’s take a closer look.

The Lightning reached the 2021 Stanley Cup Final after beating the Florida Panthers (six games), Carolina Hurricanes (five games), and New York Islanders (seven games).
Advertisement
Ad
Advertisement
Ad
Most notably, they eliminated former Flames players Sam Bennett, Ryan Lomberg, Dougie Hamilton, and Austin Czarnik.
Curtis McElhinney
Goaltender, age 38
Years with Calgary: 2007–08 to 2009–10
“McBackup” already won his first Cup last year. His two-year deal with the Lightning expires after this season and it’s far from a given he returns to the NHL in 2021–22, especially after he posted an underwhelming .875 save percentage in 12 games with the Bolts this season.
It’s been a ton of fun to watch McElhinney’s career. He started out in Calgary as a seldom-used backup for Miikka Kiprusoff before bouncing around in such locales as Anaheim, Ottawa, and Phoenix in the early 2010s. After spending the entire 2012–13 season playing alongside the likes of Jonathan Marchessault, Ryan Johansen, Cam Atkinson, David Savard, Matt Calvert, and Tim Erixon (remember him?) on Columbus’ AHL team, McElhinney earned a spot with the Blue Jackets in 2013–14 and established himself as a reliable backup with the team for parts of four seasons.
Advertisement
Ad
Advertisement
Ad
The Toronto Maple Leafs claimed McElhinney off waivers during the 2016–17 season. He spent the rest of that season—plus the entire 2017–18 campaign—in Toronto, posting sparkling numbers before being waived (and claimed) again prior to 2018–19. He ultimately wound up with the Carolina Hurricanes that year, playing a career-high 33 games at age 36 before appearing in five of the team’s 15 playoff contests.
After joining the Bolts in 2019–20, McElhinney played 18 regular-season games as Andrei Vasilevskiy’s backup and posted an 8-7-3 record. He rode the pine for the entirety of Tampa’s 25-game championship run; nonetheless, he earned the right to have his name engraved on the Stanley Cup.
Jay Feaster
Executive, age 58
Years with Calgary: 2010–11 to 2013–14
Feaster served as the Flames’ general manager for parts of four seasons. He oversaw a period of significant organizational change, trading Jarome Iginla, Alex Tanguay, Jay Bouwmeester, and Rene Bourque in the process. Feaster drafted Sean Monahan and Johnny Gaudreau and signed Ryan O’Reilly to a contentious offer sheet.
Advertisement
Ad
Advertisement
Ad
After being fired by Brian Burke in 2013, Feaster re-joined the Lightning in July 2014 and entered a role as the team’s vice president of community hockey development. He previously served as Tampa Bay’s general manager from 2002 to 2008.

The Lightning reached the 2021 Stanley Cup Final after beating the Toronto Maple Leafs (seven games), Winnipeg Jets (four games), and Vegas Golden Knights (six games).
Most notably, they eliminated former Flames players TJ Brodie, David Rittich, and Derek Forbort.
Paul Byron
Forward, age 32
Years with Calgary: 2011–12 to 2014–15
Tiny but tenacious, Byron spent parts of four seasons with the Flames after being acquired from the Buffalo Sabres in the Robyn Regehr trade. He scored 40 points (13 goals, 27 assists) in 104 games over his final two years in Calgary before being placed on waivers prior to the start of the 2015–16 campaign.
Advertisement
Ad
Advertisement
Ad
Controversially, the Flames waived Byron while keeping Brandon Bollig and three goaltenders on their main roster. Montreal swooped in to claim the 5’9″ winger, who scored 11 times in his debut go-round with the Habs before posting 22, 20, and 15 goals in his next three seasons.
Byron has battled through injuries over his most recent two seasons with the Canadiens and has two years remaining on a deal paying him a $3.4 million annual salary. At this point, he’s a little bit overpaid for what he does. Regardless, he’s been an excellent soldier (and an alternate captain) in his time with the Habs and he’s come up big on multiple occasions in these playoffs.
Brett Kulak
Defenseman, age 27
Years with Calgary: 2014–15 to 2017–18
Another one who got away for basically nothing, Kulak has carved out a niche as a solid defenseman in Montreal who can be relied upon to move up and down in the lineup.
Advertisement
Ad
Advertisement
Ad
Kulak almost single-handedly kept his pairing, with Michael Stone, afloat during the 2017–18 season. After joining the Flames on their trip to China during the 2018 preseason, Kulak saw his tenure in Calgary end that October with an awful trade which saw Calgary receive two players who barely registered for them at the AHL level. Neither Matt Taormina nor Rinat Valiev has played a single professional hockey game since exiting the Flames’ system.
In 11 playoff games with Montreal this season, Kulak has averaged 13:11 of ice-time and tallied a single assist.
Michael Frolik
Forward, age 33
Years with Calgary: 2015–16 to 2019–20
You’d be forgiven if you had no idea Michael Frolik was currently with the Habs. The Czech winger signed a one-year deal with Montreal back in December but played just eight games during the regular season, scoring zero points. He has yet to appear during the playoffs.
Advertisement
Ad
Advertisement
Ad
Frolik was a very good two-way forward for most of his tenure with the Flames, topping out with 17 goals and 44 points in the 2016–17 season and playing a key role on the dominant “3M Line” with Matthew Tkachuk and Mikael Backlund. He won the Stanley Cup with Chicago in 2013.
Erik Gustafsson
Defenseman, age 29
Years with Calgary: 2019–20
Another former Chicago player, Gustafsson appeared in more playoff games with Calgary than he did in the regular season. The Flames acquired him at the 2020 trade deadline and dressed him in seven games before the 2019–20 campaign prematurely ended due to the COVID-19 pandemic.
Gustafsson then suited up for all 10 of the Flames postseason contests, tallying four assists. He signed with the Philadelphia Flyers as a free agent in October 2020, playing 24 games with them in 2020–21 before being dealt to Montreal in April for a mere seventh-round pick. Now, he’s headed to the Stanley Cup Final after appearing in 13 playoff games with the Habs.
Advertisement
Ad
Advertisement
Ad