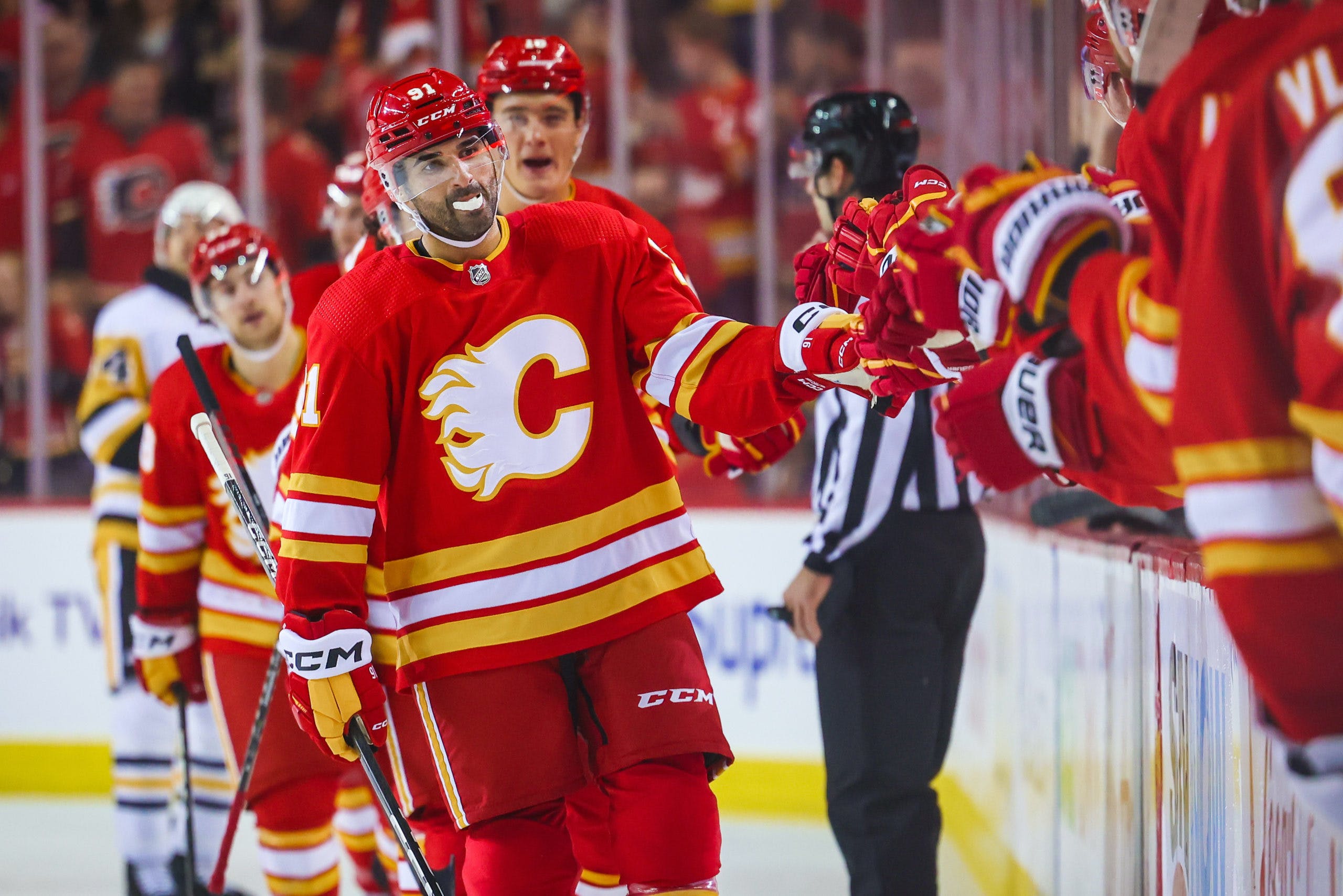 Photo credit: © Sergei Belski-USA TODAY Sports
By Robert Munnich
3 months ago
Comments
We’re seven games into the Calgary Flames’ 2022-23 season and we have seen a lot to like. The team is 5-2 with wins against some of the best teams in hockey.
But how have the Flames newcomers looked in the very early stages of their Flames careers. Let’s give them some way-too-early grades based off their start of the season.

Kadri has been everything and more the Flames could have wanted heading into this season. He has been the Flames best and most consistent player to start this season. He is driving the play for the Flames top line of Dillon Dube and Andrew Mangiapane. He is leading the team in scoring with nine points in seven games, good for a 105-point pace. He has taken control of the Flames offence during a time when Elias Lindholm and Jonathan Huberdeau have yet to hit their stride yet.
Kadri has also has some strong analytics. He leads the Flames in shot attempts, scoring chances, high danger scoring chances and individual expected goals. He has been a beast in all situations and been a huge part in the five wins for the Flames this season.
Advertisement
Ad
Advertisement
Ad

This has been an unbelievable start. pic.twitter.com/xrmTyi6vp6

Nazem Kadri picks up his second goal of the season! pic.twitter.com/gWDe5CHNMk

Huberdeau has had a mediocre start to his time with the Flames. He has yet to show Flames fans why he is a $10.5 million player. We have certainly seen flashes of his brilliant vision and play making, but we haven’t seen it over the course of an entire game. The part of his game that I am most disappointed in has been his ability to shoot the puck and create offence from individual scoring chances. In all situations, Huberdeau ranks 13th in shot attempts, 12th in high danger scoring chances, and 12th in shots on goal.
It would be great if we saw Huberdeau become a little more selfish and shoot the puck more. Huberdeau has proved over his last five seasons that he can score goals. In his last five seasons Huberdeau has been on pace to score 27, 30, 27, 33, and 31 goals over 82 games. He is a very good goal scorer, but that element is missing from his game right now.
Advertisement
Ad
Advertisement
Ad

Elias Lindholm with a powerplay goal set up by Jonathan Huberdeau.

What a start to the season! #Flames pic.twitter.com/TpwOoxEl9q

Here is a better video of Huberdeau's first goal as a Flame. pic.twitter.com/JW98rQn0kJ

Weegar has been solid for the Flames. I don’t think he has hit is potential quite yet, but we are seeing flashes as to why he is such a good defenceman. His transition game is the most impressive part of his season so far. He has an ability to quickly move the puck out of his own zone to forwards tape, which is not an easy thing to do.
One interesting part of Weegar’s season has been his numbers with and without Chris Tanev.
Weegar has been substantially more productive without Chris Tanev. It is a very small sample size, but I still thought it was interesting to note. This pairing will start to develop more chemistry as the year goes on and I expect them to be one of the most dominate pairings in the NHL.
Advertisement
Ad
Advertisement
Ad

Kevin Rooney has not made a huge impact of the Flames through his first seven games of the year. But that is to be expected for someone playing fourth line minutes. The fourth line as a whole has been quite good for the Flames, but that is more because of the work that Brett Ritchie and Milan Lucic do along the boards in the offensive zone. One aspect of Rooney’s game that has been impressive is his skating. He is a very good skater and that certainly is needed when playing on a line with Ritchie and Lucic.
One thing I would like to see improvement in is his face-offs. He is currently winning 46.34% of face-offs. You’d certainly like to see that number get above 50% in the near future.
Advertisement
Ad
Advertisement
Ad
Here is Rooney’s only point of the season. A face-off win to Michael Stone who blasts a shot past Jack Campbell.
How do you think the newest Flames have performed this season? Let us know in the comments section!