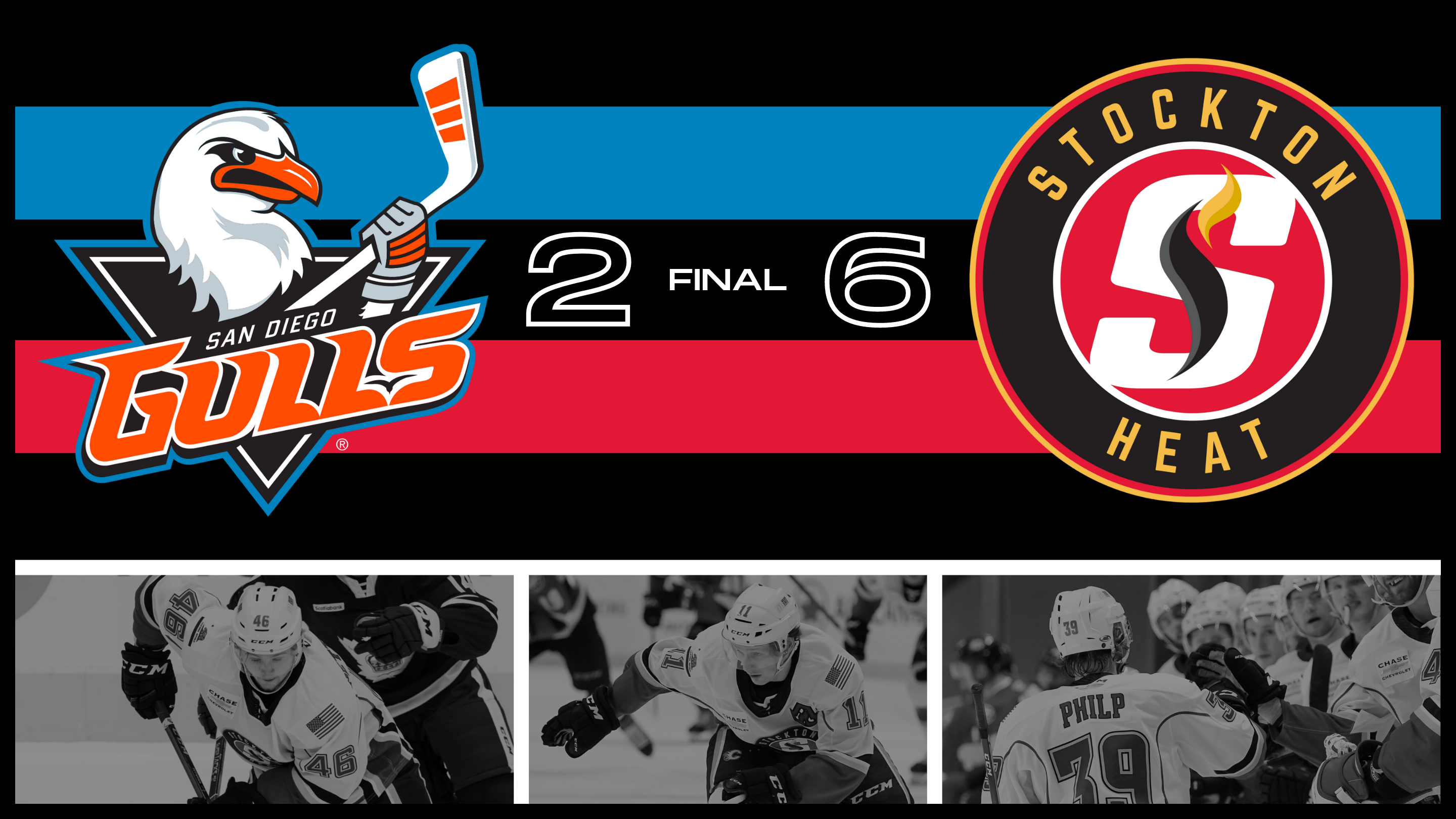 Photo credit: Graphic by Mike Gould
By Paige Siewert
1 year ago
Comments
The Stockton Heat continue to find success in the early games of the 2021-22 season, beating the San Diego Gulls 6-2 on Friday night. Nine different Heat skaters got points on the scoresheet this game with three of them earning a multi-point night. In their first three games of the season, they have taken five out of a possible six points and hold a record of 2-0-1.
The odds weren’t exactly stacked in their favour as the Gulls hosted their season opener against the Heat with a reported 12,920 fans in attendance. They were rowdy too. The Heat received a “friendly,” visiting crowd welcome, being booed on their way out of the locker room. This didn’t seem to have an overall effect on their play. This game started as a battle of the penalties and quickly turned into a scoring clinic by the second period.

While I could explain every goal scored by the Heat, it would be better to show. Nick DeSimone looked as if he would open up the scoring for the Heat in the first period, but it ended up being Justin Kirkland that found the back of the net first.

Justin Kirkland opens up scoring for the Heat 10:23 into the first period. #AHLHeat pic.twitter.com/T1abVpOdkA

The Gulls answered back on the power play a couple of minutes later and that was the extent of the scoring through the first period. In the second period, it was all Stockton. This started with a tic-tac-toe play initiated by Jakob Pelletier, passed over to Adam Ruzicka and tapped in by Matthew Phillips. The chemistry this line is showing early on is very promising.
Advertisement
Ad
Advertisement
Ad

Later in the second, Jakob Pelletier also wanted to give his goal celebration move some practice and scored off a redirect from Matthew Phillips on the power play. This ended up being Pelletier’s second goal on the season and his second game-winning goal not only this year but also in back-to-back games.

A perfect redirect from Jakob Pelletier pulls the Heat ahead 3-1 over the Gulls. #AHLHeat pic.twitter.com/C3uZ96bp12

The game of redirects continued into the third period where Connor Mackey got everything behind a shot on the blue line early in the final frame that caught part of Adam Ruzicka’s stick before finding the back of the net. This came at only 1:11 into the period. It was that close to Mackey’s first goal on the season, but he earns the assist instead.

Watch the blue line as Connor Mackey rips a shot that is redirected by Adam Ruzicka #AHLHeat pic.twitter.com/PHw0Umhafo

The Gulls got their second and final power-play goal of the night just over a minute later, and Walker Duehr scored two minutes and 10 seconds later off a breakaway play he created for himself by breaking up a San Diego pass.
Advertisement
Ad
Advertisement
Ad

Even that did not conclude the scoring. To wrap up a very eventful opening five minutes of the third period, Luke Philp also found the back of the net on a what? You guessed it. Redirect again.

One thing about the Heat, they'll redirect the puck. Luke Philp gets a goal off a redirected shot from Nick DeSimone. Glenn Gawdin picks up an assist as well. Goal number 6 for the Heat tonight. #AHLHeat pic.twitter.com/JdOELeCNp1

The third period was filled with a slew of penalties and a few roughing minors for the likes of Martin Pospisil and Hunter Drew of the Gulls. The Heat finished their game in a pretty concrete fashion with their 6-2 win.

Two skaters made their season debut with Stockton on Friday. But in no way are they fresh faces. Glenn Gawdin returned to the Heat after starting the season with Calgary and clearing waivers earlier this week. He picked up his first point of the season on an assist on Luke Philp’s goal in the third period.
Advertisement
Ad
Advertisement
Ad
Byron Froese also made his official return to the Heat in this game against San Diego with a familiar letter on his jersey. It was announced earlier in the week that Froese will unsurprisingly reprise his role as captain of the Heat for the third season in a row. He also picked up a point in his first game with the team off of Kirkland’s opening goal.

Up until this point, not a lot has been mentioned about goaltending in this game. The reason for that is there was not a lot to test. Dustin Wolf got the night off and Adam Werner got his season debut with the Heat. He played a very solid game, stopping 20/22, but really didn’t need to do the heavy lifting in this one with his teammates peppering shots and earning insurance goals early in this one.
Advertisement
Ad
Advertisement
Ad
With the extra bodies Stockton has, not every player dressed for this one. Here are the ones who spent the night in the press box.

Stockton also assigned a few players to the Kansas City Mavericks since their last game. Reid Perepeluk, Greg Moro, Andrew Shortridge, and Ryan Olsen went down to their ECHL affiliate who happened to just kick off their season against the Iowa Heartlanders on Friday.

This Gulls game was the front end of a two-game weekend series but the Heat will get a change of opponents for the second game of the series. They travel upstate to hopefully continue their hot streak against the Bakersfield Condors on Saturday night. Game time is 8 p.m. MT.