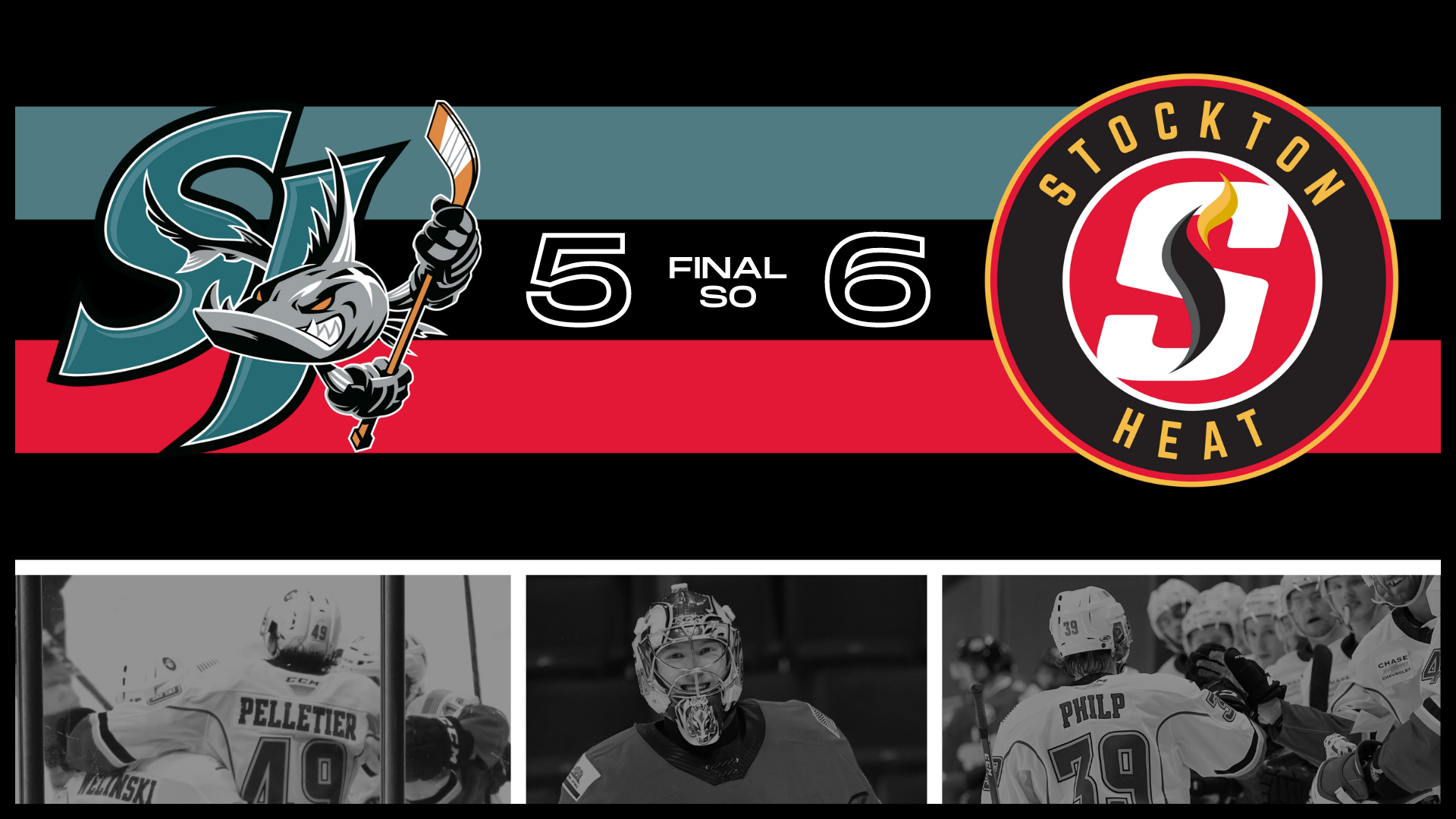 Photo credit: Graphic by Mike Gould
By Paige Siewert
10 months ago
Comments
It was a fun Friday night for Stockton Heat hockey. They hit the road to face the San Jose Barracuda. Between both teams, five goals were scored in the second and another five in the third period. If that wasn’t enough action, the shootout also went to six rounds. Lots of action and lots to build off of going into the second game of their weekend series. Stockton was on the winning side of this battle with a final score of 6-5.

Both sides of the tug-of-war

Despite just playing each other about a week ago, it took some time for these teams to get the scoring going. Dustin Wolf got a break in net and Adam Werner was challenged quite early in this game. He faced 14 shots in the first period and stopped all of them. The Heat weren’t able to light the lamp through the first 20 minutes either and the score stayed the same as what they started with going into the first intermission.
The second is where all the action kicked off. San Jose opened up the scoring early with a goal coming at 2:07. The Heat kept their recent trend of answering back ASAP when Emilio Pettersen picked up a tip-in goal 27 seconds after the Barracuda’s first goal of the night.
Advertisement
Ad
Advertisement
Ad

The next goal occurred a couple of minutes later, again by the home team. Now the Heat weren’t able to answer back as fast, but a minute and 12 seconds later, they tied it up once again. Matthew Phillips had an outstanding diving play that allowed him to feed the puck to Jakob Pelletier, who was wide open. He ripped a point-blank shot making him the fourth Heat rookie to reach the 20 goal milestone in their first season.

A diving play by Matthew Phillips + a point-blank Jakob Pelletier shot = No chance for their opposing goalie #AHLHeat pic.twitter.com/dBAqKrGiaR

The Barracuda were able to sneak in one more goal before the end of the period, but the Heat did not keep up with that one in the middle frame. The second period came to a close with the Barracuda up 3-2 on the Heat.
In the third period, the back and forth scoring continued. The Barracuda attempted to extend their lead and succeeded at first. They score first in the third and pull ahead by two. Then Mark Simpson scored for the Heat shortly after.
Advertisement
Ad
Advertisement
Ad

Mark Simpson scores off the rebound right on the doorstep. #AHLHeat pic.twitter.com/evZSZghE2U

Simpson shot himself in the foot in a way, as he took a penalty shortly after and San Jose scored about 30 seconds later. The Barracuda were back up to a two-goal lead, but the Heat were able to pull some production together to get things past regulation.
Walker Duehr scored his third goal in as many games to put things within one from a feed from Kevin Gravel.

Things got down to the wire when the Heat took a timeout with just over two minutes to go in the third period. The final goal of the third was a little bit of a weird one as Byron Froese was cross-checked in front of the net just seconds before Matthew Phillips tipped in the goal. The officials called it a goal, waved it off, then confirmed it was a goal after realizing the delayed penalty they were calling was going to the team that just had scored.
Advertisement
Ad
Advertisement
Ad

Goal? No goal? Goal ✅ Matthew Phillips gets the last touch on this one to tie things up and force overtime. #AHLHeat pic.twitter.com/Xx0vBnXXvn

The Heat forced overtime and even that wasn’t able to solve it. San Jose were the only ones that recorded any shots in overtime. They got three recorded shots and thankfully, none snuck past Adam Werner.
In the shootout, the first three shooters on each side all scored. For the Heat, this was Justin Kirkland, Glenn Gawdin, and Connor Zary. In the fourth and fifth rounds, none of the shooters were able to score. For the Heat, these were Juuso Valimaki and Matthew Phillips. Round six was the winning round, Johannes Kinnvall scored and won it for the Heat.
The final score was 6-5 with the Heat outshooting the Barracuda 39-25.

Rolling into the next one

With a close game like this, the Heat will have some momentum to carry into their game on Saturday night. They will head back home and San Jose will be in town for the rematch. Game time is 7:00 p.m. MT.
Advertisement
Ad
Advertisement
Ad