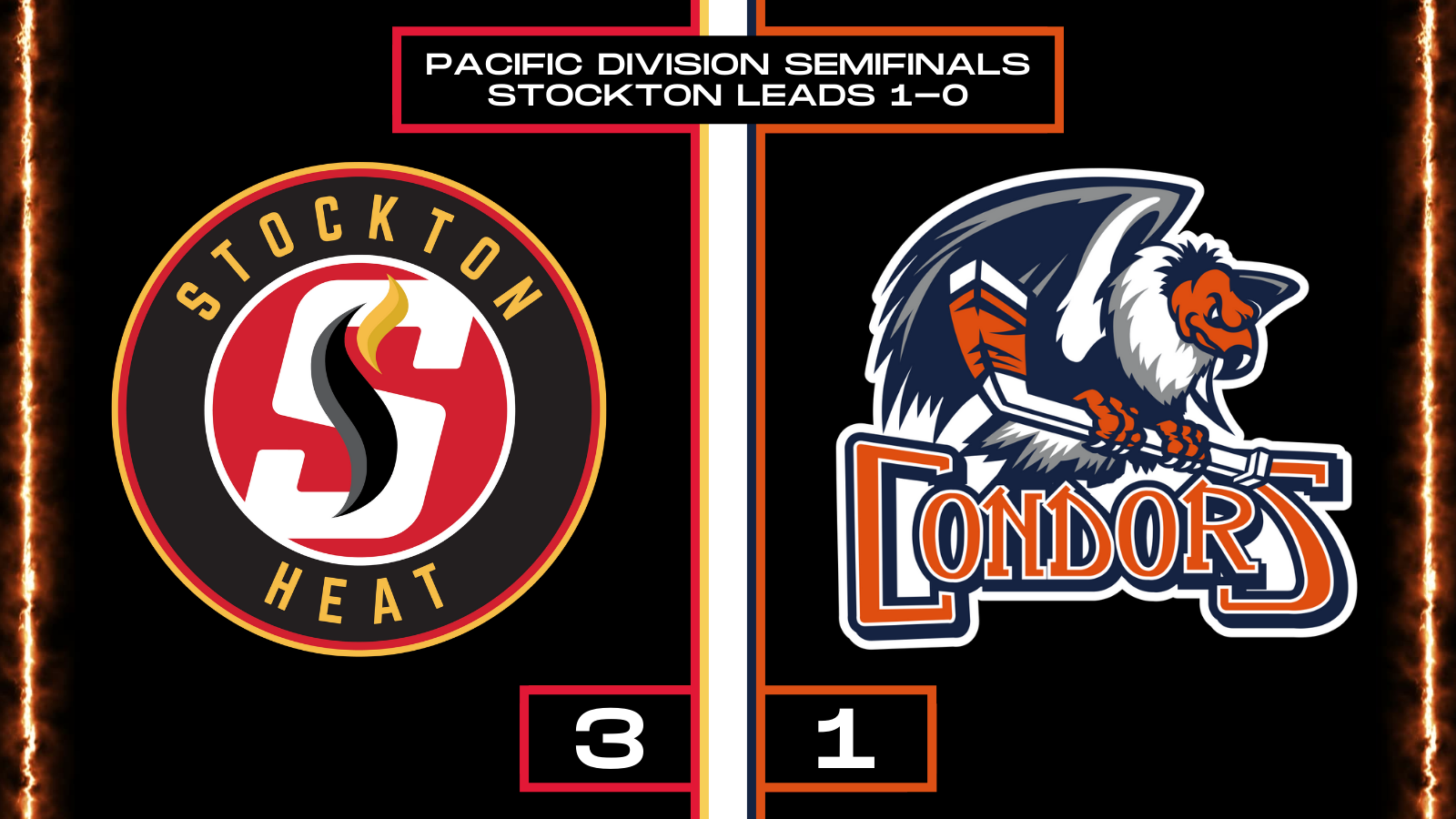 Photo credit: Graphic by Mike Gould
By Paige Siewert
6 months ago
Comments
The Stockton Heat and Bakersfield Condors kicked off their best of five playoff series on Tuesday, May 10th. The Heat earned themselves a first-round bye after clinching the top spot in the Pacific Division and got some time off to rest, recuperate and prepare for their first playoff series. The Condors knocked out the Abbotsford Canucks in two games in their best-of-three series and as the lowest-seeded Pacific Division winner, they were assigned to the Heat for their Pacific Division Semifinal series.
The Heat got things started on a good note with a 3-1 win on Tuesday night.

Stick to the early lead

The Heat took a bit of time to earn some zone time with the Condors putting up some of the early shots in this game. However, the Heat would be the ones to get things going on the scoreboard with a shorthanded opening goal by Jakob Pelletier.
Advertisement
Ad
Advertisement
Ad

The Heat continued to build off the momentum of the first goal when just 1:23 later, Emilio Pettersen made an exceptional offensive zone pushed and was rewarded with a goal as well.

Emilio Pettersen put in some work for this goal, fending off three Condors skaters in the offensive zone. The Heat take a 2-0 lead.#AHLHeat | #BAKatSTK pic.twitter.com/1BHqUNHh9h

The first period finished up with the Heat up 2-0 and shots in favour of the home team with an 11-10 differential.
In the second period, it took some time to get the action going once again. It wasn’t until 8:35 into the period that the Condors scored their first goal of the game and first goal of the series. It came off as a harmless play and a goal that Dustin Wolf definitely wanted back.
Advertisement
Ad
Advertisement
Ad
The harm was kept to a minimum as the Heat got a goal back in the second after Byron Froese set up a play behind the net that Emilio Pettersen passed up to Walker Duehr and Duehr found the back of the net.

The Heat get a goal back in the second after Byron Froese and Emilio Pettersen set up a gorgeous play for Walker Duehr. 3-1 Heat.#AHLHeat | #BAKatSTK pic.twitter.com/7U191mqUMK

After two periods of play, the Heat were up 3-1 and narrowly trailing in shots 22-20.
In the third, the Heat did their part in protecting their lead. Dustin Wolf held down the fort and ensured that nothing else made it past him through the final 20 minutes. Regulation time ran out and the Heat still had their 3-1 lead. Shots finished up 29-28 with Wolf stopping 27 of 28 of Bakersfield shots.
Advertisement
Ad
Advertisement
Ad

Since their season came to an end, some recognition was due for individual efforts through the 2021-22 regular season. Among these are Dustin Wolf and Mitch Love.
Dustin Wolf was awarded the AHL’s Goaltender of the Year award for his exceptional season. He had the most wins out of any AHL goalie this season with 33 and he ranked among the top 10 in the league for GAA and top five for save percentage.
Mitch Love was also given an exceptional individual award. The Louis A.R. Pieri Memorial Award that is given to the AHL’s most outstanding head coach. He is tagged with a long list of player and team accomplishments that have led the Heat to where they are now. Their regular-season record finished up at 45-16-5-2.

Right back at it

There won’t be much time to process this win as the Heat are right back at it Wednesday night again at Stockton Arena. This series is a best-of-five so the next game could prove to be hugely advantageous if the Heat are successful. Game time is the same as their previous game at 7:30 p.m. MT.
Advertisement
Ad
Advertisement
Ad