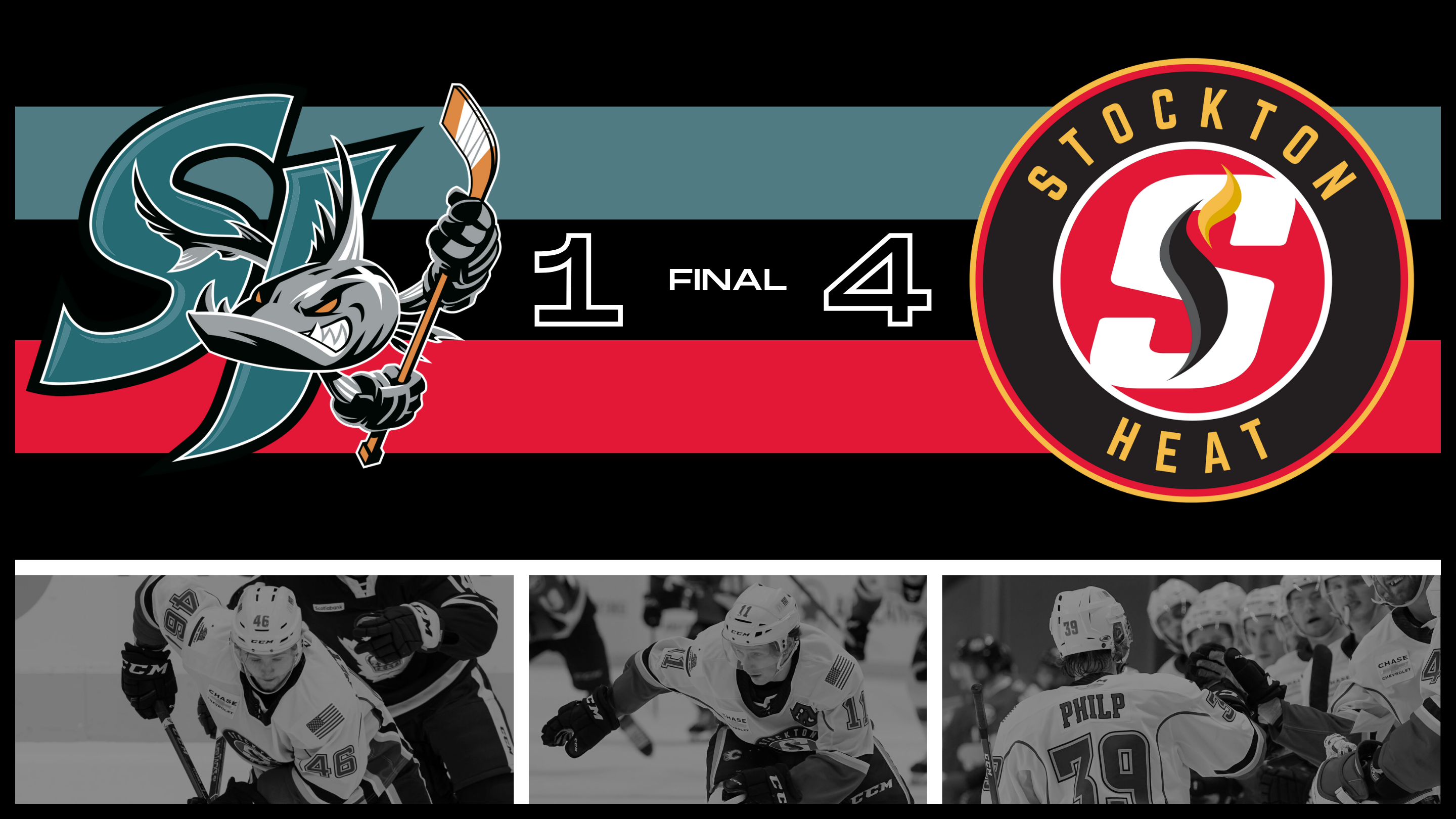 Photo credit: Graphic by Mike Gould
By Paige Siewert
1 year ago
Comments
The Calgary Flames may have snapped their winning streak this week, but the Stockton Heat’s lives on. The Heat hit the road to play their first mid-week game of the season against the San Jose Barracuda. After missing out on what was supposed to be their first match-up of the season on Sunday, they quickly got another shot at them days later. Sunday’s game was delayed due to Covid-19 repercussions and call-ups through the San Jose Sharks organization. (A reschedule date has not been announced at this time.)
On Wednesday, this game got the green light and the Barracuda ended up with enough players to fill their bench to play some hockey. Not necessarily a fun one for the home team, but the visitors seemed to thoroughly enjoy it. The Heat tacked on another win to their now five-game winning streak after defeating the Barracuda by a score of 4-1.

I hope you’re not bored of hearing the name Adam Ruzicka, because you’re going to be hearing a lot more of it this season. Ruzicka came out of the gates on fire, (no pun intended), and was already on hat trick watch just over halfway through the first period.
He opened up scoring for the Heat just 4:04 into this competition and again on the power play 11:13 into the first.
Advertisement
Ad
Advertisement
Ad

Jakob Pelletier and Nick DeSimone picked up assists on Ruzicka’s first of the night and Andy Welinski and Martin Pospisil picked up assists on Ruzicka’s second of the night. He comes off a hat trick night performance last Saturday and unsurprisingly leads team scoring with 10 points (6G, 4A) in six games. His linemate, Jakob Pelletier is chasing him on the points race with eight of his own (2G, 6A). These two go almost hand in hand as the other is usually on the ice when one of them scores.

More on the board

While it felt like Ruzicka carried this game, he was not the only Heat player that found the back of the net. Luke Philp ended up being credited with the game-winner after following up Ruzicka’s opening goal with a tap-in 1:50 later. Glenn Gawdin and Kevin Gravel picked up assists.
Advertisement
Ad
Advertisement
Ad

Happy Gilmore may have had some trouble with it, but Luke Philp is always here for the tap in. pic.twitter.com/G5FwTd932V

Martin Pospisil netted the Heat’s final goal of the night, earning himself goals in back to back games. Andy Welinski added on another point to his night with an assist on Pospisil’s goal and Ruzicka brought his night’s point total up to three with an assist on this tally as well.

It's a Marty Party at the SAP Center. pic.twitter.com/ETsoPSVD1R

In case you were wondering, Dustin Wolf is still very good at hockey. With his teammates giving him a three-goal cushion through the first 20 minutes, the pressure was off the netminder right from the jump. Wolf stood tall once again in his fourth start of the season. His stat line sits at a 1.49 GAA and a .952 save percentage that places him at seventh in the AHL in this category.
He only gave up one in this match-up late in the second period and ended up stopping 23/24 San Jose shots. He has yet to lose a game in regulation since his professional debut earlier this year.
Advertisement
Ad
Advertisement
Ad

Dustin Wolf since his AHL debut:

Stockton is still holding quite a large roster at this point in the season so not everyone is going to dress for the games. However, on Wednesday night, there was a notable name missing from the lineup: Walker Duehr.

Wouldn’t be shocked to see him recalled ahead of Thursday night vs. Dallas. #Flames

No confirmation from either club at the moment, but Brett Ritchie left the ice for the Flames on Tuesday’s tilt against the  Nashville Predators with a speculated injury. If he is expected to be out of the lineup, Walker Duehr could be very close to earning his first NHL start (or at the very least a few days of NHL pay).

There is more Heat hockey to be played this week as they return home this weekend to host the Abbotsford Canucks. That one might be a confusing one with the Heat’s history in Abbotsford but nonetheless, it is their opportunity to tack on a couple more wins to their incredible start to the season. They have still yet to walk away from a game without a point and will face their next opponents for the battle of the Abbotsford name this Friday at 8 p.m. MT.
Advertisement
Ad
Advertisement
Ad