Advertisement
Ad
HGD 11: Heat aim for a four-game sweep against the Moose 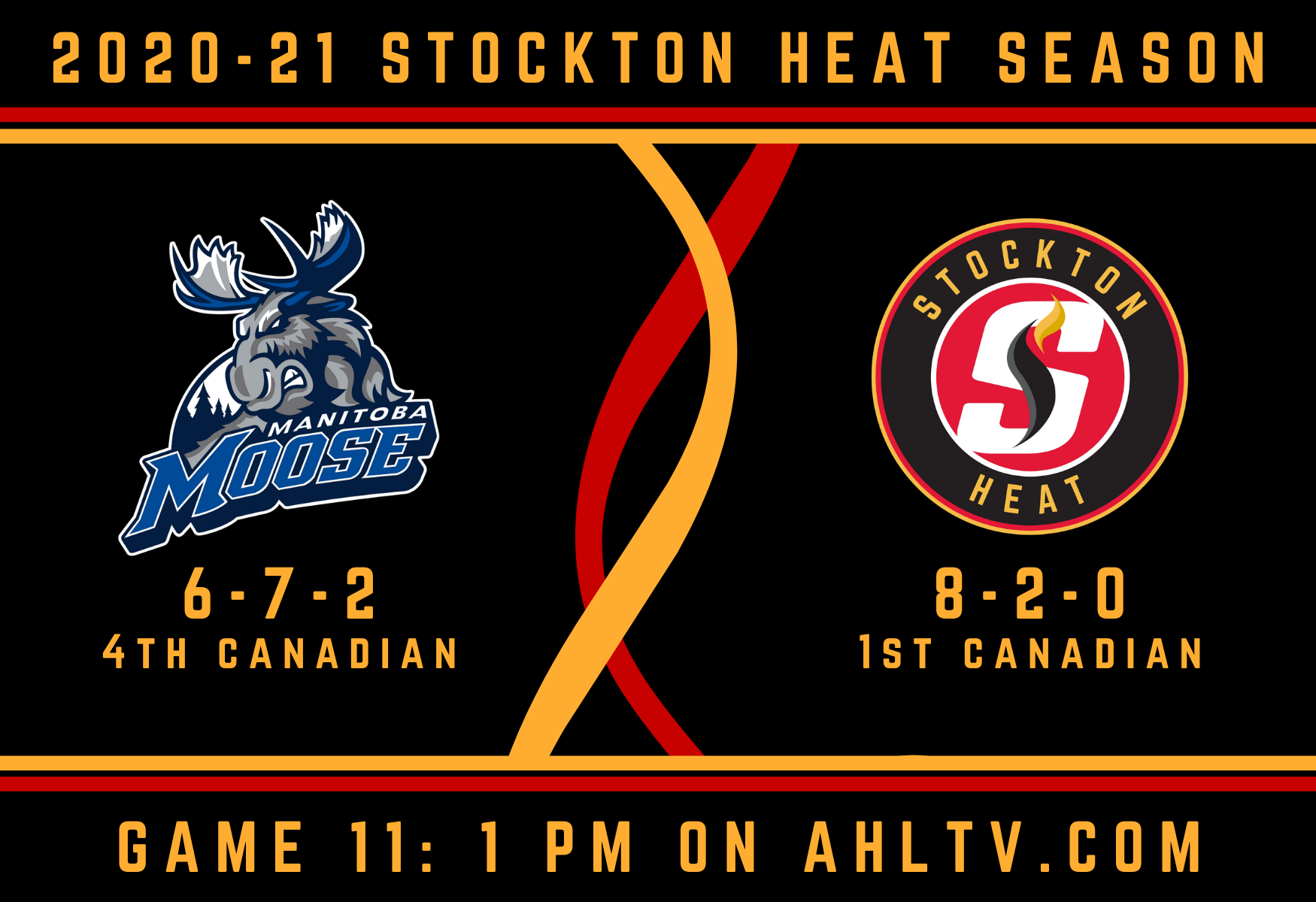 Photo credit: Graphic by Mike Gould
By Mike Gould
1 year ago
Comments
You know a winning streak is getting long when whoever writes that team’s game-day columns is running out of synonyms for “extend” and “consecutive.”
Speaking of which: the Stockton Heat will return to action on Saturday with the goal of, er, elongating their current eight-game streak of uninterrupted victories.
The Heat will finish up their four-game series against the Manitoba Moose, having taken each of the first three decisions by one goal. After collecting 6-5 and 3-2 overtime wins on Monday and Wednesday, Stockton eked out a 2-1 victory in regulation time on Thursday to continue its perfect record against Manitoba this season.
Luke Philp and Martin Pospisil scored the goals in that game to seal Stockton’s eighth-straight win. Garret Sparks made 24 saves, improving to 4-1-0 on the year with a .923 save percentage.
This eight-game winning streak is the longest in Stockton Heat history and the team has scored the first goal in its most recent seven contests. Adam Ruzicka and Matthew Phillips continue to lead the way offensively for the Heat, forming two-thirds of the first line and collectively recording 11 goals and 27 points through the first 10 games of the season.
Advertisement
Ad
Advertisement
Ad
CJ Lerby and Eetu Tuulola both sat out of Thursday’s win in favour of Rob Hamilton and Rory Kerins, respectively. With a day off since the last game, it’s possible both players could return to the lineup for the series finale.
After losing the last three games to the Heat, Manitoba now owns a 6-7-2 record in 2020-21 and sits ahead of only the Belleville Senators in the Canadian Division. Goaltender Mikhail Berdin has looked impressive against Stockton, despite failing to record any wins in the series, and has a 6-6-2 record this year to go along with a .909 save percentage.

Stockton — Matthew Phillips. The shifty winger was held without a point on Thursday for just the fourth time this year. Oddly enough, Phillips still has yet to record a one-point game this season: beyond his four zero-point nights, he’s scored two points five times and three, once. When Phillips hits the score-sheet, he makes the most of it. He last recorded back-to-back zero-point efforts in the first and second games of the season, when the Heat were outscored by a combined 12-2 margin. Since then, he’s come back with big responses after being held off the board.
Manitoba — Kristian Vesalainen. The Jets made this big Finnish winger their first-round pick in the 2017 Draft. Four years later, Vesalainen has played just 13 NHL games and is still searching for his first goal. He’s scored 16 goals and 43 points in 83 career AHL games; Saturday’s contest will be his second of the season after beginning the year with eight games in the Jets’ lineup. Vesalainen, who skated on Manitoba’s second line on Thursday, played 10 games and scored eight points in the Finnish Liiga on Eetu Tuulola’s old HPK Hameenlinna team earlier this year.
Advertisement
Ad
Advertisement
Ad

This game will be broadcast on AHLTV.com (subscription required), with the opening puck-drop set for 1:00 p.m. MT. Live game updates can be found on Twitter at @miketgould and @theheatbeat, or online at TheAHL.com.