Advertisement
Ad
HGD 13: Back to battle against Laval for first in the Canadian Division (2pm MT, AHL TV) 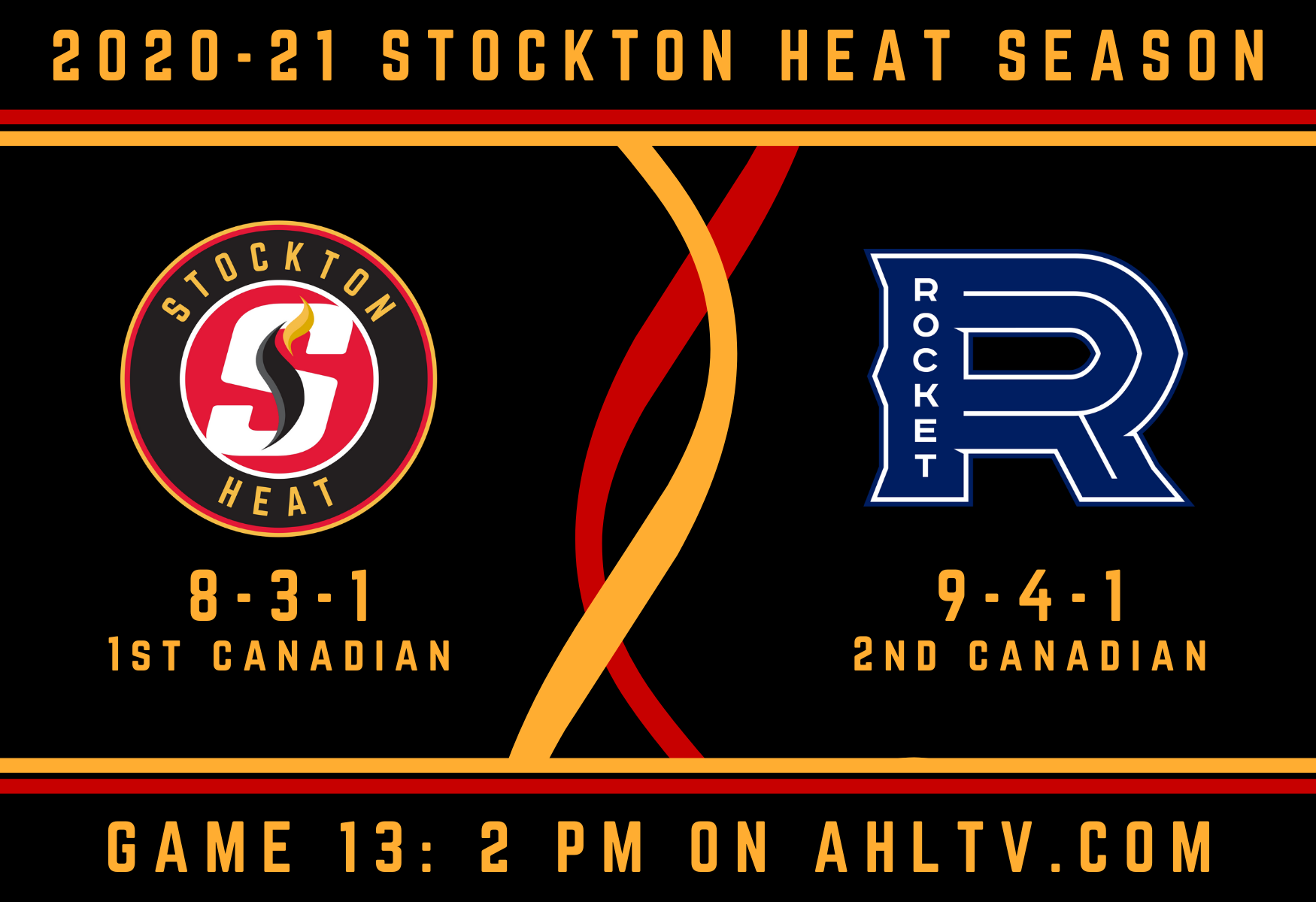 Photo credit: Graphic by Mike Gould
By Mike Gould
1 year ago
Comments
The Stockton Heat have lost two games in a row, with the latest setback coming at the hands of the Laval Rocket on Thursday.
Those two teams will meet again on Saturday afternoon in a clash to help determine who will take control over the American Hockey League’s Canadian Division.
Stockton currently boasts the best points percentage in the division, with its 8-3-1 record translating to a .708 figure. The 9-4-1 Rocket have two more points than Stockton but have played in two more games.
Laval shot out to a 3-0 lead over Stockton early in Thursday’s clash, beating Heat goaltender Louis Domingue three times on 11 shots in the first 11 minutes of regulation time. The Heat battled back over the remaining two full periods, with Alexander Yelesin scoring early in the second period to break Cayden Primeau’s shutout bid and Luke Philp and Matthew Phillips subsequently adding markers of their own.
Advertisement
Ad
Advertisement
Ad
Ryan Poehling eventually scored the overtime winner to seal a 4-3 Rocket victory. The 22-year-old former first round pick now leads Laval with five goals and 10 points through his first 13 games.
Phillips’ goal came with just 18.6 seconds remaining in the third period to tie Thursday’s game at three. The 5’7″ right-shot right wing leads the Heat with 15 points (six goals, nine assists) in 12 contests and ranks seventh on the AHL scoring leaderboard. The six players ahead of Phillips have all played in more games.
Thursday’s game represented the AHL season debuts for defenseman Michael Stone, forward (and team captain) Byron Froese, and goaltender Louis Domingue. Froese served as the first-ever captain of the Rocket between 2017 and 2019.

Stockton — Louis Domingue. Thursday’s game was not especially kind to Domingue. He looked very shaky in the first period and didn’t mince his words to the media about his in-game comfort level.
“I felt terrible,” Domingue said. “I didn’t know where I was in my net, I didn’t have any feel to the game. Mentally, I was searching for my footing, for my positioning, for about everything.”
Domingue clarified that he started to feel better as the game progressed. The 29-year-old goaltender will surely be looking to carry forth his late-game momentum from Thursday into this contest, assuming Garret Sparks doesn’t get the nod in net.
Advertisement
Ad
Advertisement
Ad
Laval — Jordan Weal. This 28-year-old right-shot forward has been around the NHL for a while, having been drafted by the L.A. Kings in the third round of the 2010 Draft. He’s since played for the Kings, the Philadelphia Flyers, the Arizona Coyotes, and the Montreal Canadiens.
Weal entered this season having entirely avoided the AHL since the 2016-17 season. He played 49 games for the Canadiens last season, scoring eight goals and 15 points. He’s been in the minors since the 2020-21 season began but is actually earning an NHL salary while in Laval. Weal owns a one-way NHL contract paying him $1.5 million this year.
With the flat salary cap, Weal is likely too expensive for the Habs to call up unless somebody expensive hits long-term injured reserve. Even then, Michael Frolik and Poehling are likely ahead of him on the depth chart. He’ll likely need to have a dominant year to earn another look with Montreal and he showed signs of his past prowess on Thursday, scoring twice against Domingue.
Advertisement
Ad
Advertisement
Ad

This game will be broadcast on AHLTV.com (subscription required), with the opening puck-drop set for 2:00 p.m. MT. Live game updates can be found on Twitter at @miketgould or online at TheAHL.com.