Advertisement
Ad
HGD 16: Entering the second half with a tilt against Belleville (5pm MT, AHL TV) 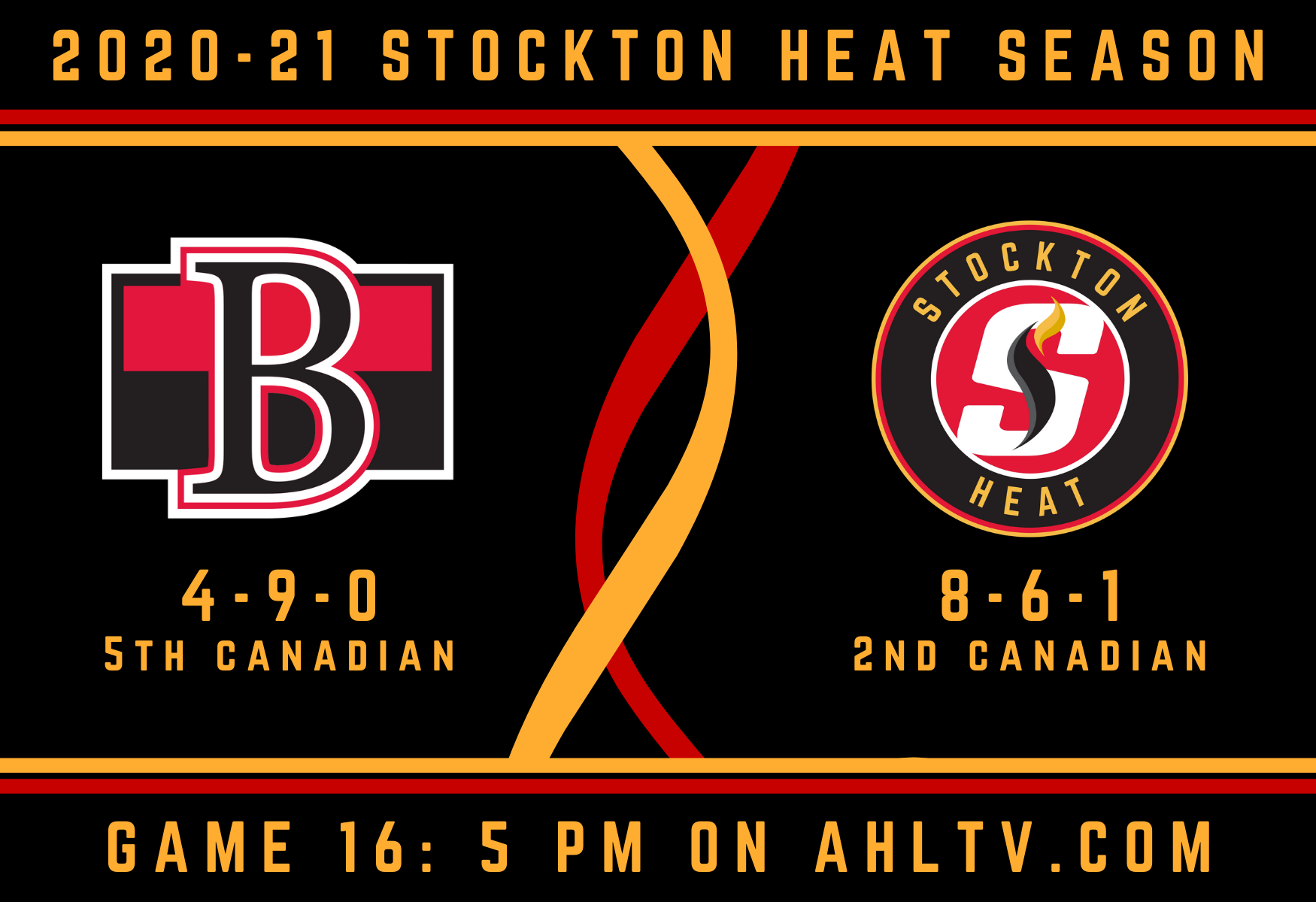 Photo credit: Graphic by Mike Gould
By Mike Gould
1 year ago
Comments
Here’s the good news: the Stockton Heat are 8-3-0 this season against non-Laval Rocket opponents.
What’s the bad news, then? Well, the Heat just finished playing a big series of games against that very same Laval team. They failed to get a single win on their most recent four-game homestand against the Rocket, scoring just nine goals and going 0-3-1 in that span.
Including their Mar. 13 loss to the Manitoba Moose, the Heat are currently enduring a difficult five-game losing streak. Their number-one centre, Adam Ruzicka, has zero goals in his last nine games. Connor Zary is back in the WHL and Martin Pospisil is hurt. Things aren’t great right now.
Stockton will return to action Friday against the Belleville Senators, a team they’ve only faced once this season. Zary—who, unfortunately, is no longer available—accounted for half the Heat offense in that game, scoring two goals (including the winner) en route to a 4-1 Stockton win on Mar. 3.
Advertisement
Ad
Advertisement
Ad
Ruzicka and Justin Kirkland also scored for the Heat, which received 38 saves from goaltender Garret Sparks. It remains unclear whether Sparks or Artyom Zagidulin, recently assigned to Stockton from Calgary’s taxi squad, will get the nod on Friday. That said, with the Heat also in action on Saturday, both netminders will likely receive ample playing time this weekend.
Belleville had an interesting night on Mar. 24. They lost to the Toronto Marlies by a 3-0 score while dressing just nine forwards and seven defensemen. Former Heat attacker Jeremy McKenna scored the winner for Toronto to drop Belleville to a paltry 4-9-0 record.

Stockton — Luke Philp. The 25-year-old Philp is emerging as one of Stockton’s most consistently important players on a night-in, night-out basis. Despite the team’s recent stretch of losing, he has three goals and seven points in his last six games and has quickly climbed up the team’s scoring ladder.
Philp gives the Heat value in all situations and can play both centre and the wing. He followed up a successful three-year career at the University of Alberta with a very good AHL debut season in 2019-20, leading the Heat with 19 goals in 52 games. He’s added five more this season and is looking like a potential call-up option for the Flames.
Advertisement
Ad
Advertisement
Ad
Belleville — Lassi Thomson. The Ottawa Senators picked this right-handed defenseman in the first round of the 2019 Draft, 15 picks after the Colorado Avalanche selected Bowen Byram with the pick Ottawa traded for Matt Duchene.
Ottawa acquired the Thomson pick in exchange for trading Duchene to Columbus just one season later. While Byram is already in the NHL, Thomson is emerging as a solid prospect in his own right, already playing top-four minutes in the AHL in his first season of North American professional hockey.
Thomson started this season playing with Juuso Valimaki on Tampereen Ilves of the Finnish Liiga. He failed to replicate Valimaki’s gaudy point-per-game offensive numbers but he still held down a regular spot in the lineup, playing 18 games and recording two assists before coming over for Senators training camp.
Advertisement
Ad
Advertisement
Ad

This game will be broadcast on AHLTV.com (subscription required), with the opening puck-drop set for 5:00 p.m. MT. Live game updates can be found on Twitter at @miketgould or online at TheAHL.com.