Advertisement
Ad
HGD 17: Looking to get back on track against Belleville (2pm MT, AHL TV) 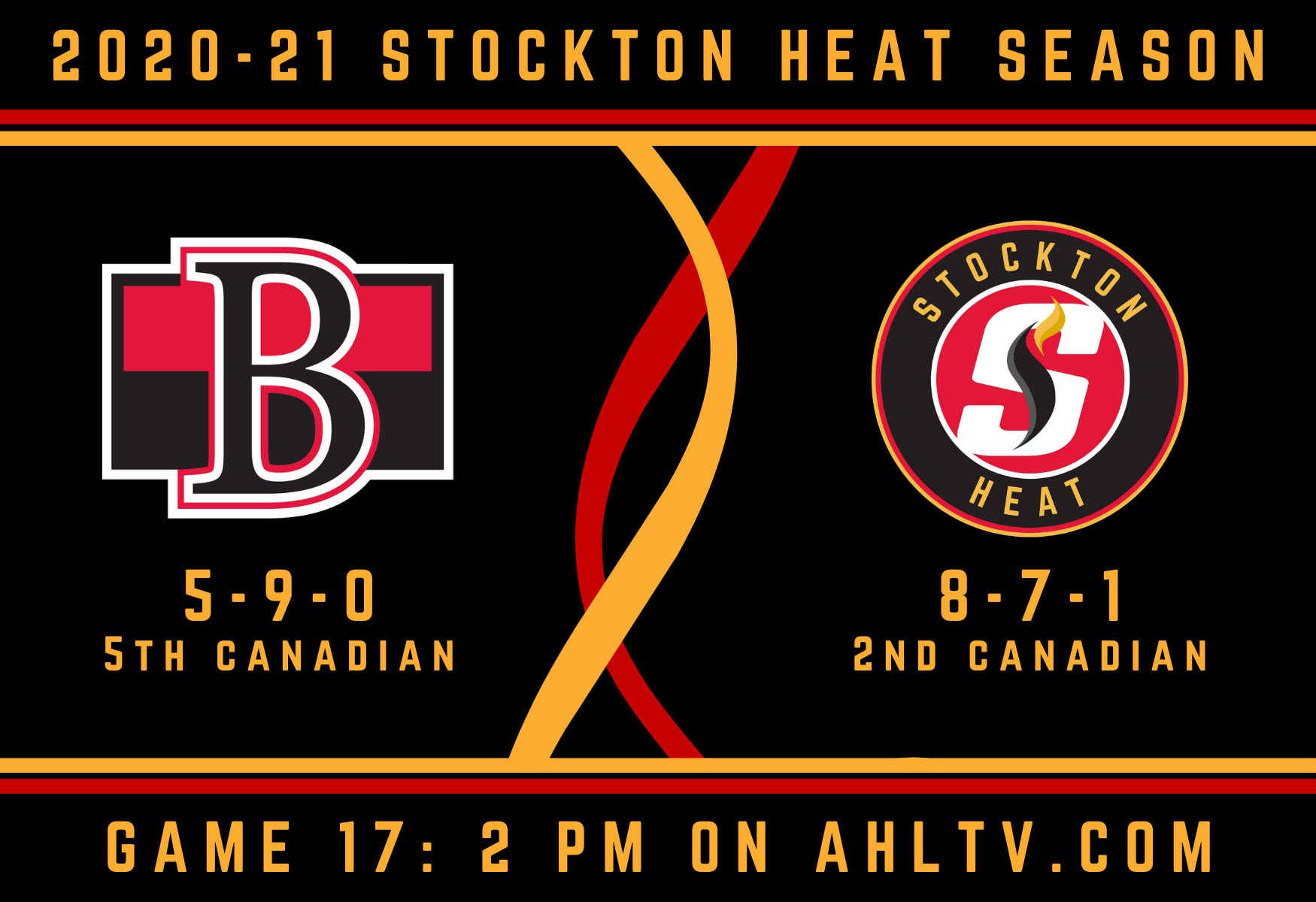 Photo credit: Graphic by Mike Gould
By Mike Gould
1 year ago
Comments
Outside of their eight-game winning streak between Feb. 24 and Mar. 11, the Stockton Heat have yet to win a game this year.
The Heat fell in back-to-back contests to start the season before winning their next eight. Since the end of that stretch, Stockton has lost its last six games and is now dangerously close to the .500 points percentage mark.
Still, at 8-7-1, the Heat remain in second place in the AHL’s Canadian Division. The Belleville Senators, which beat Stockton on Friday, sit in last with a 5-9-0 record. Stockton and Belleville will return to battle for a rematch on Saturday afternoon.
Artyom Zagidulin will likely get the start for Stockton. The 25-year-old Russian goaltender is 2-1-0 in three AHL games this season and boasts a .908 save percentage. He also got into 28 minutes of an NHL game with the Calgary Flames earlier this season.
Advertisement
Ad
Advertisement
Ad
After Marcus Hogberg got the nod on Friday, Kevin Mandolese could see the ice for Belleville on Saturday. Mandolese was named the QMJHL’s Goaltender of the Year in 2019-20 after posting a 26-8-1 record with a .925 save percentage with the Cape Breton Screaming Eagles. He’s 1-2-0 with a .922 save percentage for Belleville this year.
Luke Philp scored Stockton’s only goal in its 2-1 loss to Belleville on Friday. Logan Shaw and Vitaly Abramov tallied to help Belleville get the victory.

Stockton — Adam Ruzicka. Where has Ruzicka’s offense gone? The big centre has no goals in his last 10 games and has contributed just two assists over that span.
He’s taken a lot of shots in those contests—30, to be exact, or three per game—but he has failed to turn them into concrete production. If the Heat are going to snap this losing streak, they’ll likely need their number-one centre to find his stride again.
Belleville — J.C. Beaudin. In 2017-18, the Ottawa Senators and Colorado Avalanche made a huge trade which sent Matt Duchene to the Canadian capital. The two teams hooked up again on a deal again the following year, this time choosing to go for a more minor swap.
Ottawa acquired Beaudin in exchange for fellow NHL tweener Max McCormick. Beaudin, who just turned 24 on Mar. 25, got into 22 games with the Senators last season—fighting Tony DeAngelo along the way—and recorded only a lone assist. He’s still searching for his first goal of this AHL season, having posted just three helpers in 14 games.
Advertisement
Ad
Advertisement
Ad

This game will be broadcast on AHLTV.com (subscription required), with the opening puck-drop set for 2:00 p.m. MT. Live game updates can be found on Twitter at @miketgould or online at TheAHL.com.