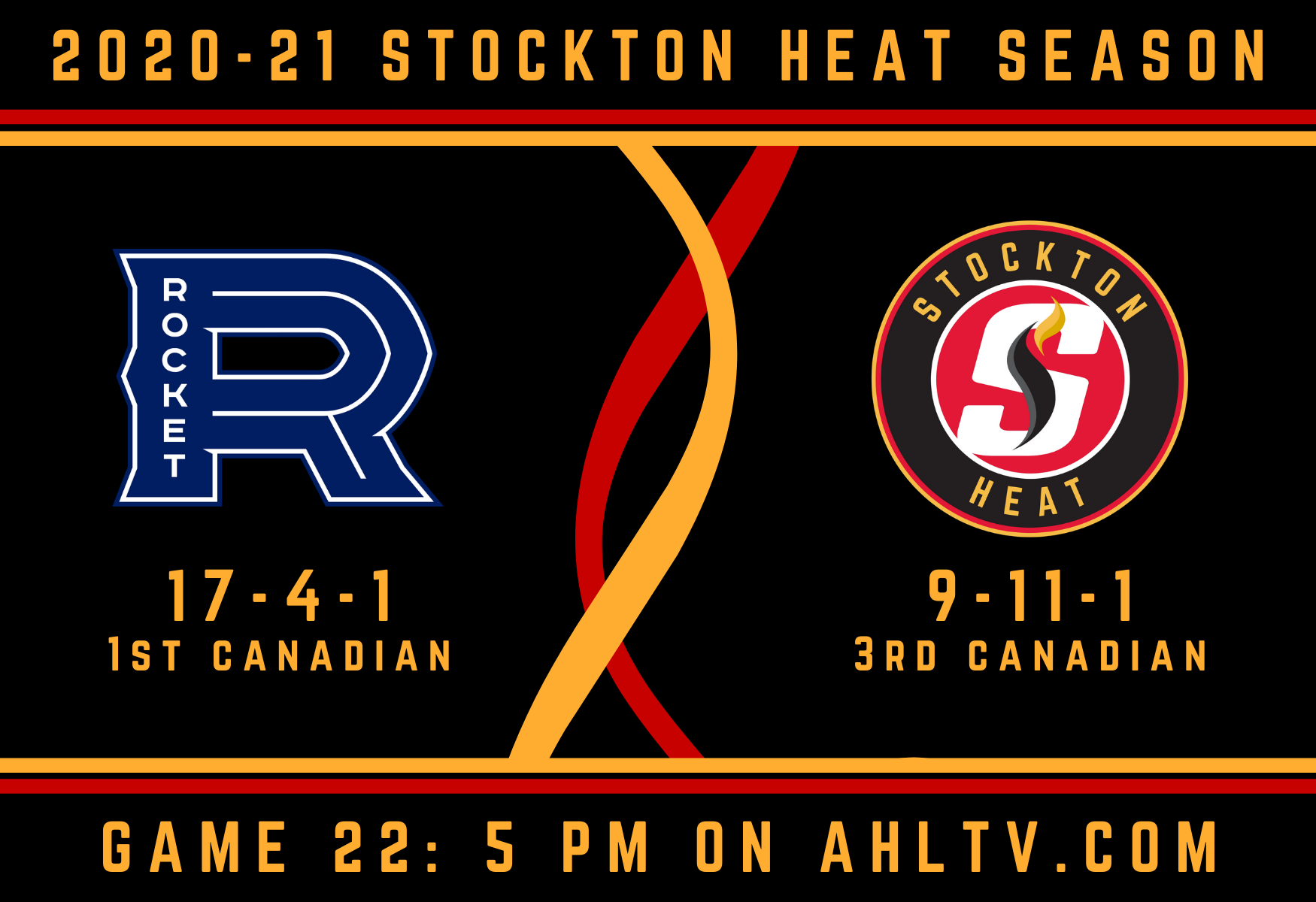 Photo credit: Graphic by Mike Gould
By Mike Gould
1 year ago
Comments
You know the story by now: After starting the season with an 8-2-0 record, the Stockton Heat have regressed dramatically and have lost 10 of their last 11 games.
Six of those 10 losses have come at the hands of the Laval Rocket, Stockton’s opponent on Tuesday. The seventh and final meeting this season between these two teams will be Stockton’s last opportunity to muster its first-ever win against the Montreal Canadiens’ AHL affiliate.
Laval dominated for much of the early portion of Sunday’s game, outshooting the Heat 19-1 over the first 25 minutes and ultimately prevailing by a 4-2 score. Garret Sparks made 34 saves for Stockton in the losing effort.
Mark Simpson and Adam Ruzicka scored for the Heat, which fell to 9-11-1 with the loss. Stockton currently occupies third place in the AHL’s North Division with a .452 points percentage, barely ahead of the .450 Manitoba Moose.

Stockton — Matthew Phillips. Where has Phillips’ offense gone? The ultra-talented winger still leads the Heat with 10 assists but has recorded just one point (a primary helper) in his last nine games.
Sunday’s game was Phillips’ first multi-shot outing since Mar. 18. He had recorded exactly one shot in all but one of his previous eight contests.
The 22-year-old forward now sits two points back of his regular centre, Adam Ruzicka, for the team lead in scoring. Ruzicka recently snapped an extended scoring drought of his own—perhaps it’s now Phillips’ turn to bump the slump.
Advertisement
Ad
Advertisement
Ad
Laval — Rafael Harvey-Pinard. Who’s this guy? The first of two Montreal seventh-round picks in the 2019 Draft, Harvey-Pinard looks more like a blue-chipper than a late flyer in his debut turn at the pro ranks.
The 5’9″ speedster enjoyed a terrific QMJHL career split between the Rouyn-Noranda Huskies and the Chicoutimi Sagueneens. His scoring prowess in junior appears to be translating to the AHL level: he currently ranks fourth on Laval with 16 points in 23 games.
Harvey-Pinard torched the Heat with two goals on Sunday and he ranks in a tie with Jesse Ylönen for third on the Rocket with seven tallies on the year.

This game will be broadcast on AHLTV.com (subscription required), with the opening puck-drop set for 5:00 pm MT. Live game updates can be found on Twitter at @miketgould or online at TheAHL.com.
Advertisement
Ad
Advertisement
Ad