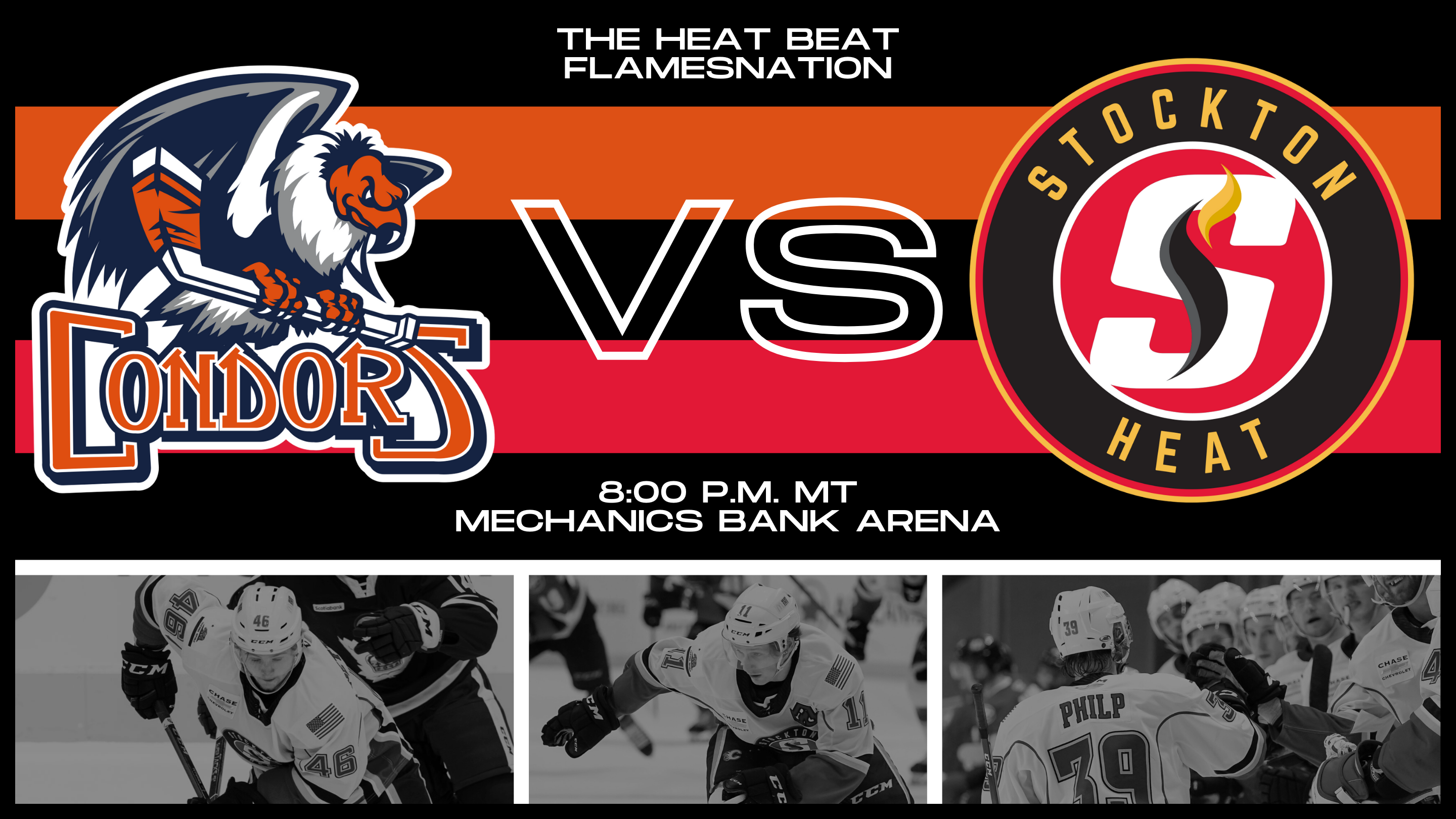 Photo credit: Graphic by Mike Gould
By Mike Gould
1 year ago
Comments
It’s still early, but every point counts for the Stockton Heat as they try to return to the American Hockey League playoffs for the first time since 2016–17.
Fresh off a commanding 6-2 win over the San Diego Gulls on Friday, the Heat will take on the hated Bakersfield Condors on Saturday night in the rivals’ first meeting of the 2021–22 season.
Bakersfield is the AHL affiliate of the Edmonton Oilers. The Condors currently rank fourth in the AHL Pacific Division with a 2-1-0 record; Stockton, at 2-0-1, is tied with the Henderson Silver Knights for second behind the 3-0-1 Ontario Reign. With a win over Bakersfield, the Heat can move into a tie with Ontario for first place in the Pacific Division and the entire AHL.
@Justin Kirkland, @Matthew Phillips, @Jakob Pelletier, @Adam Ruzicka, @Walker Duehr, and @Luke Philp scored for Stockton against San Diego. @Adam Werner made 20 saves for his first win as a member of the Calgary Flames organization.
Advertisement
Ad
Advertisement
Ad

Stockton — @Dustin Wolf. The 20-year-old goaltender has been a revelation between the pipes for Stockton and should make his third start of the season on Saturday. Wolf currently boasts a .957 save percentage to go along with a 1-0-1 record, having picked up right where he left off when he stopped 62 of the final 64 shots he faced with the Heat in 2020–21. Also in 2020–21, Wolf posted an 18-3-0 record and a .940 save percentage with the Everett Silvertips of the Western Hockey League and won the Del Wilson Trophy as the league’s goaltender of the year.
Advertisement
Ad
Advertisement
Ad
Bakersfield — @Adam Cracknell. The Flames drafted Cracknell, now 36, way back in the ninth round of the 2004 NHL Entry Draft. He spent parts of three professional seasons in the Flames organization but didn’t crack the NHL until 2010–11, by which point he had joined the St. Louis Blues. Cracknell has played 210 NHL games with the Blues, Columbus Blue Jackets, Vancouver Canucks, Edmonton Oilers, Dallas Stars, New York Rangers, and Anaheim Ducks; he re-joined the Oilers organization in 2020–21 after spending the previous season with Kunlun Red Star of the Kontinental Hockey League.

This game will be broadcast on AHL TV (subscription required) and on Spreaker (audio only), with the opening puck-drop set for 8:00 pm MT.
FlamesNation contributor Paige Siewert will provide live game updates on her Twitter account. Additionally, you’ll be able to follow along at TheAHL.com.
Advertisement
Ad
Advertisement
Ad