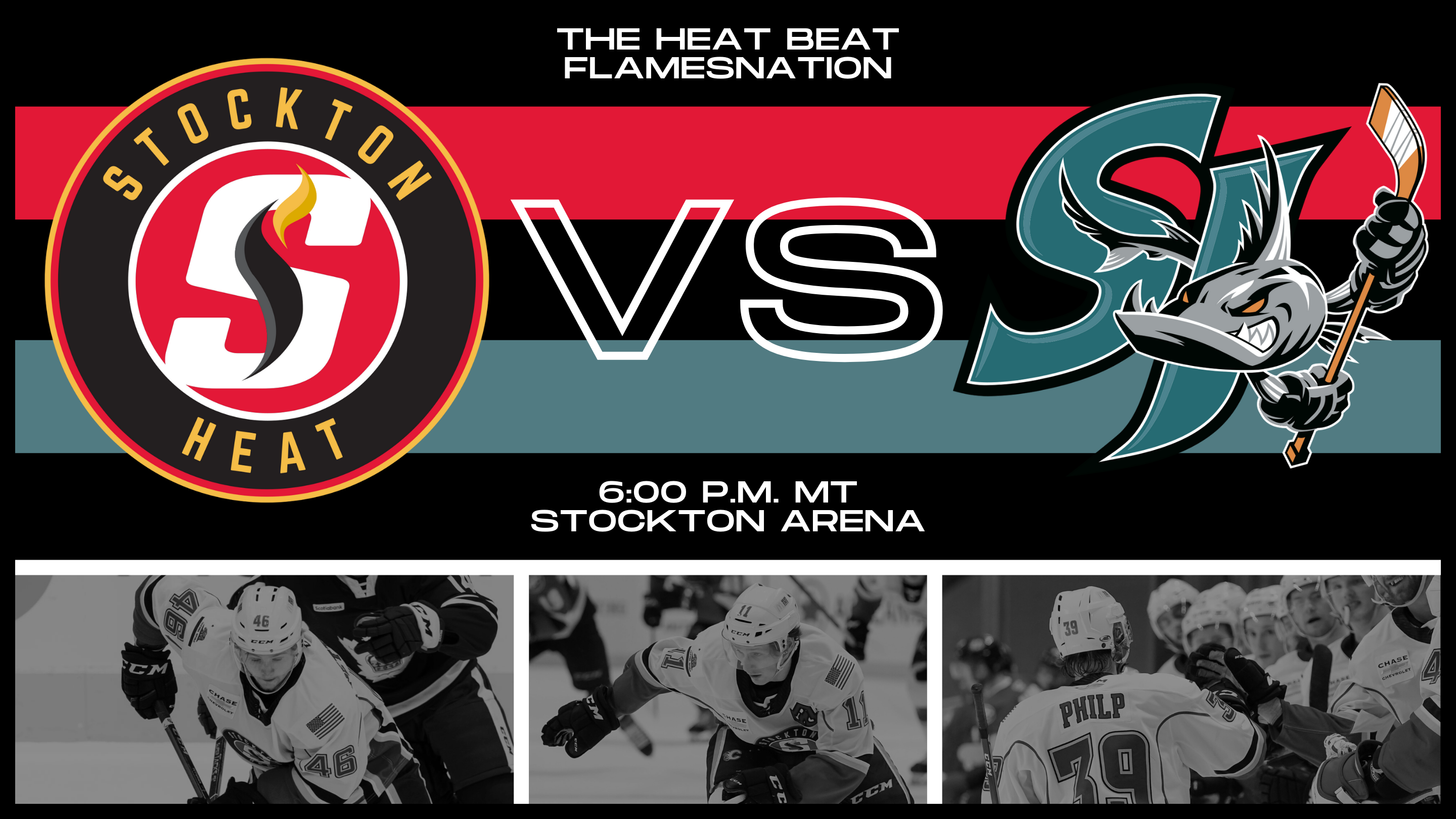 Photo credit: Graphic by Mike Gould
By Mike Gould
1 year ago
Comments
UPDATE: This game has been postponed due to a number of San Jose Sharks players entering COVID-19 protocols. It will be played at a future date to be determined.
The Heat is on in a big way.
The Stockton Heat have now won four consecutive games, with the latest coming in dominating 6-2 fashion against the Colorado Eagles on Oct. 30. They’ll aim to extend that streak on Oct. 31 when they welcome the 2-1-1 San Jose Barracuda to Stockton Arena.
Stockton’s top line of @Jakob Pelletier, @Adam Ruzicka, and @Matthew Phillips combined for six points in the victory. Ruzicka led the way with his first AHL hat trick.
The Barracuda roster is very much in the air after their parent club, the San Jose Sharks, had seven players and head coach Bob Boughner enter COVID-19 protocol on Saturday.
The Sharks recalled @John Leonard, @Jaycob Megna, @Nicolas Meloche, @Nick Merkley, and @Ryan Merkley for their game against the Winnipeg Jets later that day. It’s unclear whether those five players will be available to the Barracuda against the Heat on Halloween night.
Advertisement
Ad
Advertisement
Ad
You’ll be able to catch this game on AHL TV and Spreaker at 6:00 p.m. MT.

Stockton — @Matthew Phillips. Adam Ruzicka scored a hat trick on Saturday; Jakob Pelletier picked up two helper. It looks like it’s Phillips’ turn to put forth a big offensive performance. The diminutive winger recorded only a single primary assist against the Eagles and watched his two linemates move further ahead of him on the Heat scoring leaderboard. Phillips can catch up with a multi-point game against the Barracuda.
San Jose — @Noah Gregor. A good AHL producer with 58 games of NHL experience, Gregor nonetheless did not receive the call to join the Sharks on Saturday. The 23-year-old centre has four points in four games to start the 2021–22 AHL season but will likely need to surpass the point-per-game threshold to earn another look in the NHL. He has eight goals and 11 points in 58 games with the Sharks.
Advertisement
Ad
Advertisement
Ad

This game will be broadcast on AHL TV (subscription required) and on Spreaker (audio only), with the opening puck-drop set for 6:00 pm MT.
FlamesNation contributor Paige Siewert will provide live game updates on her Twitter account. Additionally, you’ll be able to follow along at TheAHL.com.