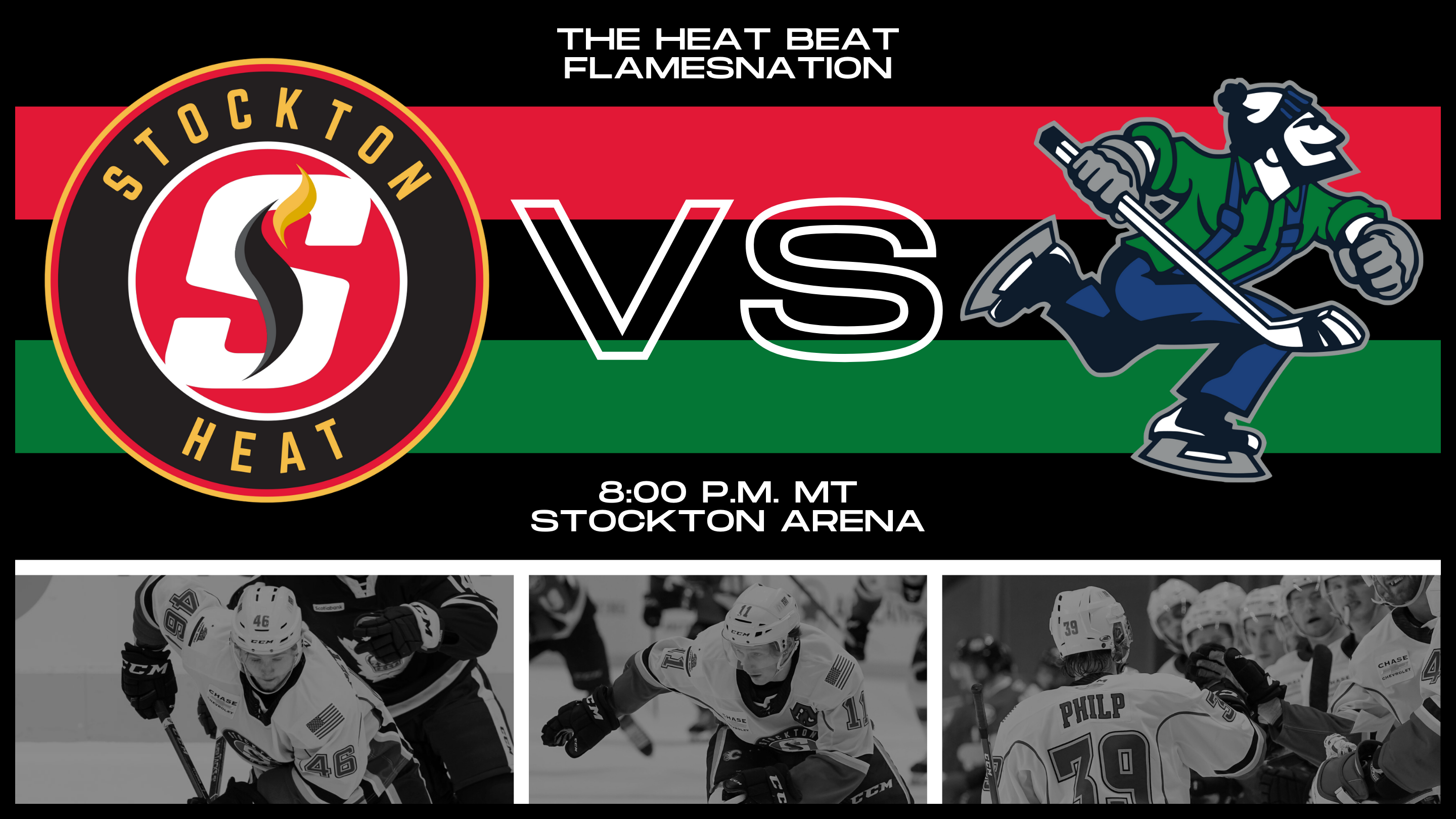 Photo credit: Graphic by Mike Gould
By Mike Gould
1 year ago
Comments
The Heat are playing against Abbotsford? What a world we now live in…
That’s right: Friday will mark the first-ever meeting between the Stockton Heat and the brand-new Abbotsford Canucks.
Abbotsford previously hosted the Calgary Flames’ American Hockey League affiliate, also called the Heat, between 2009 and 2014. It was a strange fit — how many people in a Vancouver suburb really wanted to watch Flames prospects? — and the team subsequently relocated to Glens Falls, NY for a memorable one-year stint as the Adirondack Flames for the 2014–15 season.
This past off-season, the Vancouver Canucks relocated their AHL operations from Utica, NY to Abbotsford. It’s a much more logical arrangement that could turn into a long-term fit, particularly given how the rest of the NHL’s Pacific Division teams have their AHL affiliates on the west coast.
The “Baby Canucks” are off to a solid start in their inaugural campaign, having posted a 3-2-2 record through their first eight games. They have lots of catching up to do behind the Heat, however: Stockton is 5-0-1 with a plus-12 goal differential this season.
Advertisement
Ad
Advertisement
Ad
You’ll be able to catch this game on AHL TV at 8:00 p.m. MT.

Stockton — @Luke Philp. Stockton’s leading goal-scorer over the past three seasons (with 30 goals in 88 games), Philp will turn 26 tomorrow and will have the opportunity to celebrate early tonight against Abbotsford. The Canmore, AB product has three goals and four points in six games this season.
Abbotsford — @Danila Klimovich. The Vancouver Canucks selected Klimovich in the second round (41st overall) of the 2021 NHL Draft. He’s been a quick learner in the AHL, scoring two goals and adding an assist in his first three North American professional contests. Klimovich, who won’t turn 19 until next January, is one of the league’s youngest players.
Advertisement
Ad
Advertisement
Ad

This game will be broadcast on AHL TV (subscription required) and on Spreaker (audio only), with the opening puck-drop set for 8:00 pm MT.
FlamesNation contributor Paige Siewert will provide live game updates on her Twitter account. Additionally, you’ll be able to follow along at TheAHL.com.