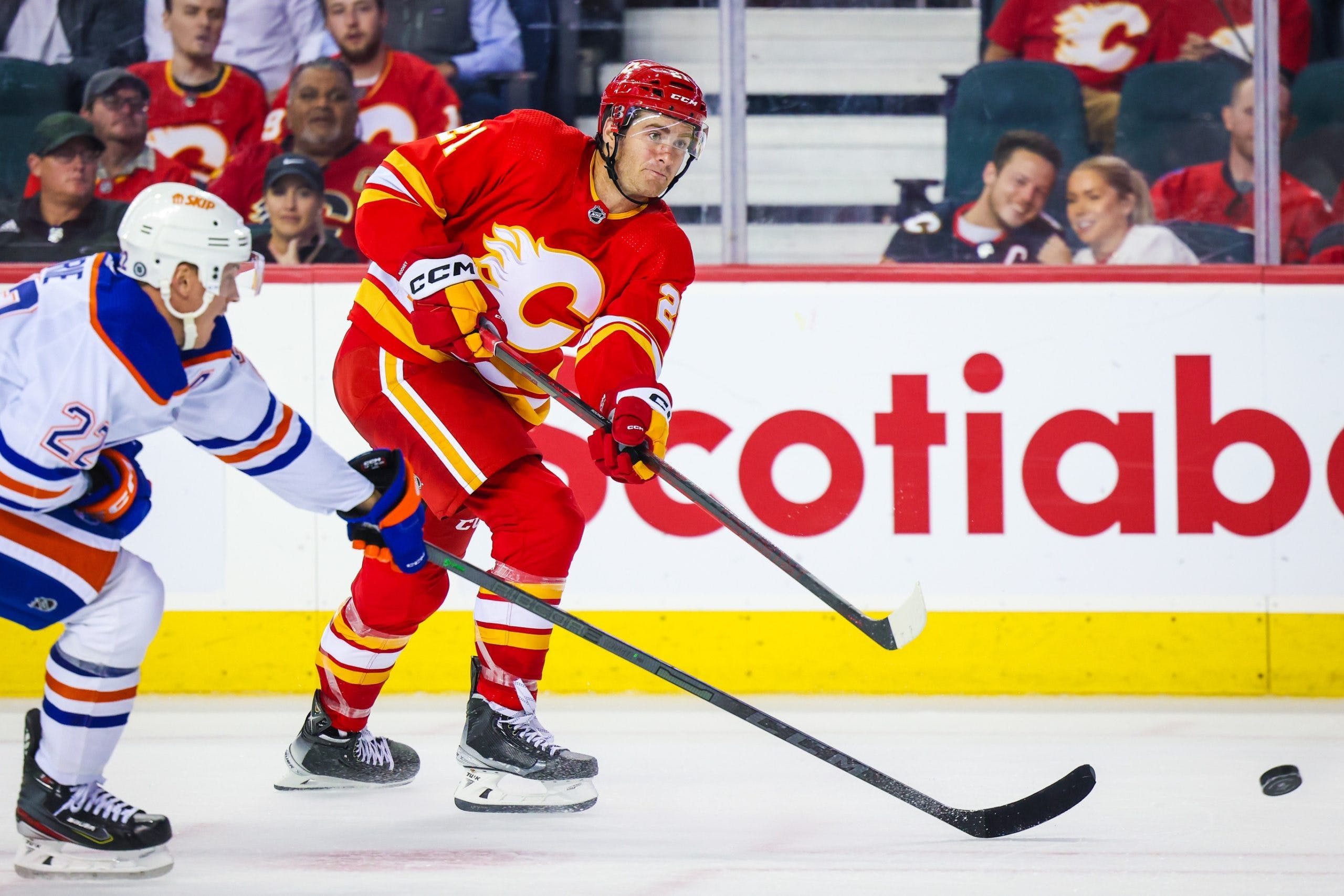 Throughout training camp, Calgary Flames head coach Darryl Sutter has repeatedly discussed his team’s need for another forward to step into a top-nine role.

Jonathan Huberdeau, Elias Lindholm, Andrew Mangiapane, Nazem Kadri, and Tyler Toffoli are pretty much locked in as five of the Flames’ top-six forwards, with Dillon Dube looking like a pretty safe bet to round out that group.

But there hasn’t been an obvious answer to the question of who to play with Mikael Backlund and Blake Coleman on the “third line” — which, in reality, is anything but your typical bottom-six unit.

Backlund and Coleman are both premier two-way National Hockey League forwards making more than $10 million between them. That’s not an overpay, either. They’re well worth that money — they’d be second-liners on more than half the teams in this league — and they’ll be key to the Flames finding success in 2022–23.

Over the years, the Flames have used Backlund as a mentor for some of their prospects entering the NHL. But Jakob Pelletier, Matthew Phillips, and Connor Zary have all been demoted to the American Hockey League despite showing promise last year and/or during camp. They clearly aren’t Sutter’s preferred candidates to fill that void.

The Flames also invited established NHL forwards Sonny Milano and Cody Eakin to attend training camp on professional tryouts. Milano has been a stronger producer and play-driver than Eakin in recent seasons, but neither forward has done much to stand out in camp. Sutter’s most recent words on the matter: “It’s been challenging for both.”

The kids are gone. The PTOs might be soon to follow. And we’ve seen enough from the likes of Brett Ritchie and Trevor Lewis during their Flames tenures to know they’re likely not ideal fits next to a pair of deceptively skilled and speedy top-six-calibre players in Backlund and Coleman.

Rooney is coming off a season with the New York Rangers where he really struggled to stay afloat at both ends of the ice. The Rangers had an awfully tough time generating or preventing anything during Rooney’s shifts last year. He finished the 2021–22 regular season with six goals and 12 points in 61 games, adding two assists in 15 playoff contests.

But Rooney’s tough year in Manhattan might have been an anomaly. Before that, he carved out a solid niche — particularly during his time with the New Jersey Devils — as a reliable shot suppressor with good wheels. Rooney hasn’t ever been much of a scorer, but that also hasn’t been his job.

It’s not hard to see a little bit of Garnet Hathaway in Rooney, and not just because they both wear No. 21. They both play very straightforward games, disrupting defenders with tenacious forechecking and using their great skating to keep up with their linemates.

Back in 2018–19, Hathaway was a huge part of the Flames’ best unit (with Andrew Mangiapane and Derek Ryan) down the stretch. Despite arguably being the least skilled player on that line, Hathaway was undeniably effective in his role. The Flames haven’t had another bottom-six forward bring the same combination of speed, size, versatility, and penalty-killing ability since.

Don’t draw any major conclusions from one game of pre-season hockey, but the Rooney–Backlund–Coleman unit was on the ice for 13 Flames shots against just two for the Kraken in Monday’s game. In 9:58 of five-on-five hockey, the line posted an 80.78 expected goals percentage (via Natural Stat Trick).

Individually, Rooney put forth a fantastic performance and easily could’ve been selected as one of the game’s three stars. He spent a ton of time killing penalties next to Backlund and the two showed early signs of chemistry at five-on-five (Rooney also played with Coleman in New Jersey).

The Flames generated a total of 2.11 expected goals at five-on-five against the Kraken on Monday. Rooney accounted for more than a third of that all by himself, accumulating 0.72 expected goals on a team-high six shot attempts and five scoring chances (all of which were deemed high-danger chances by NST).

Rooney also made a beautiful play in the offensive zone to maintain puck possession and set up Noah Hanifin’s long-range tally late in the second period. Hanifin’s blast gave the Flames a 3–0 lead, and Rooney picked up the lone assist on the goal.

NOAH HANIFIN!!! Makes it 3-0 off a nice retrieval and pass by Kevin Rooney 🔥🔥🔥 #Flames pic.twitter.com/GxuW0Rp9sn

Rooney is hardly the only remaining candidate for the Flames’ final top-nine forward spot.

Radim Zohorna is a total mystery box who could be a better scorer for Backlund and Coleman to play with. Adam Ruzicka is still kicking around, and we’ve already seen what he can do with the Flames in small doses. Maybe Dube ends up down there after all is said and done.

But if Rooney is able to help Backlund and Coleman stifle their opposition and potentially even take a step forward in the offensive zone, the Flames might have something. Stylistically, a Rooney–Backlund–Coleman combo rings a lot of the same bells as the Coleman–Gourde–Goodrow line that helped the Tampa Bay Lightning win back-to-back Stanley Cups.

Rooney is under contract for this year and next at a $1.3 million cap hit. That’s expensive for a fourth-liner but cheap for a top-nine forward. Given how training camp has unfolded, Rooney could be in line to start his Flames tenure at No. 9 on the team’s forward depth chart.