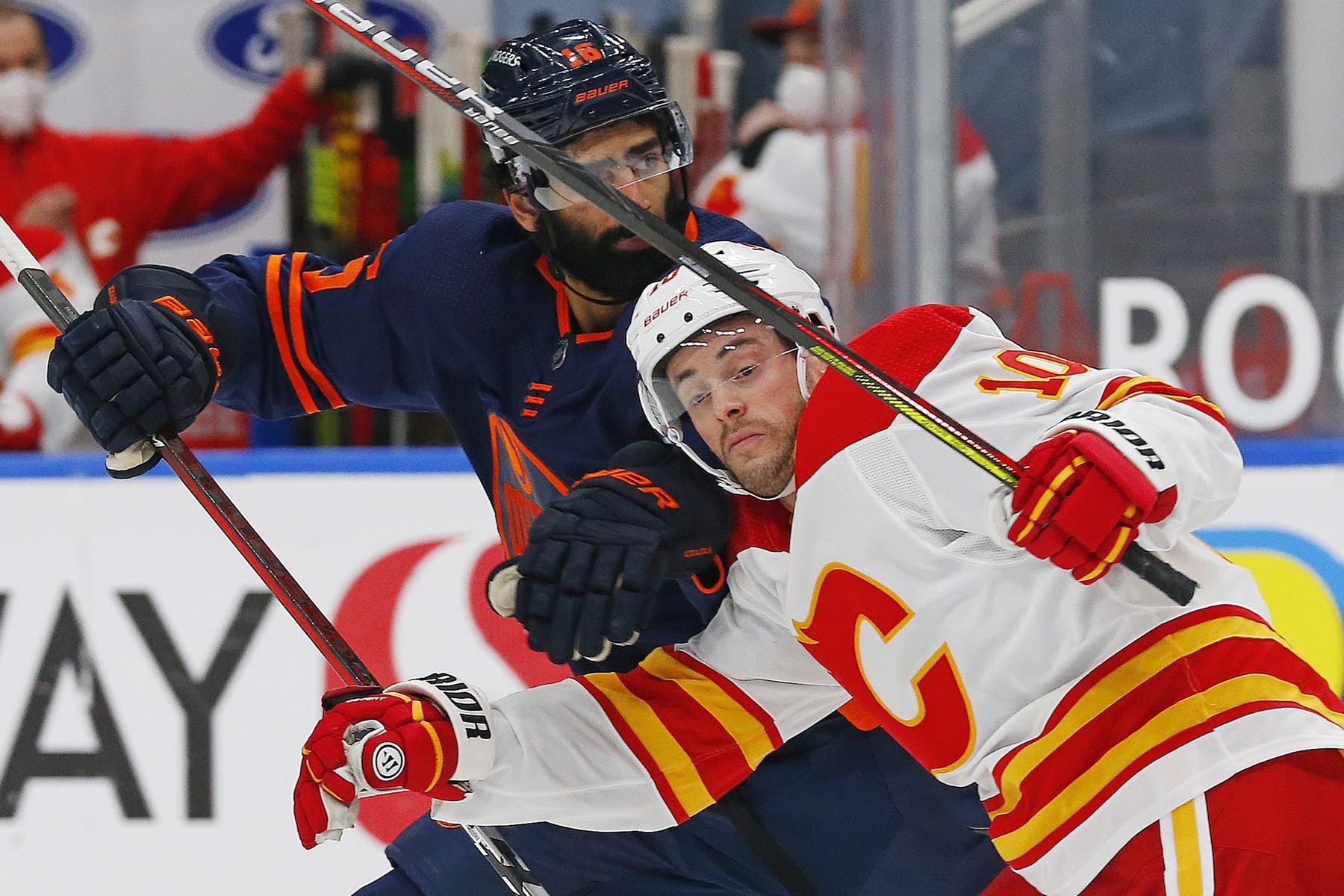 Photo credit: Perry Nelson-USA TODAY Sports
By Mike Gould
1 year ago
Comments
The Calgary Flames’ second Darryl Sutter era may have technically begun, but it still won’t quite feel real until the 62-year-old Viking, AB product makes his presence felt behind the team’s bench.
Former Stockton Heat coach and current Flames assistant Ryan Huska served as the acting bench boss in Saturday’s contest against the Edmonton Oilers while Sutter finishes his quarantine process. Huska will also fill that capacity on Sunday when his Flames take on the Ottawa Senators.
Sutter and Huska combined to play 458 NHL contests exclusively with the Chicago Blackhawks, with the incoming head coach representing all but one game of that collective experience. Compared to his new boss, an 18-year NHL head coaching veteran, Huska is pretty green—but who doesn’t look that way next to Darryl Sutter?
Huska’s debut serving as an NHL head coach came Saturday for the team he played against in his one and only NHL game. The 45-year-old has worked his way up through many levels of hockey, coaching the WHL’s Kelowna Rockets to the Memorial Cup finals in 2012 before being named the head coach of the AHL’s Adirondack Flames in 2014.
Advertisement
Ad
Advertisement
Ad
When the farm team moved from Glens Falls, NY to Stockton, CA, Huska followed and was named the bench boss of the Stockton Heat in 2015. He joined Bill Peters’ staff with the Flames as an assistant coach three years later and stayed on after Peters’ dismissal and Geoff Ward’s promotion to the big job.
Now, with all due respect to the long-serving Martin Gelinas, Huska looks to be the potential coach-in-waiting for the Flames behind Sutter. His team came rip-roaring out of the gate on Saturday, firing 21 shots towards Mike Smith in the first period while surrendering only 10. The Flames amassed 1.59 expected goals at 5v5 in the opening 20 but failed to generate even half that total over the remaining two periods, combined.
Another illustration of the Flames’ inconsistency on Saturday? They played exciting, high-event hockey to kick things off and mustered nine high-danger chances in the first period. They then managed zero in the second and just one in the third period.
Advertisement
Ad
Advertisement
Ad
Johnny Gaudreau opened the scoring for Calgary, which now falls to 11-12-2 on the year. His team-leading 10th goal illustrated how the Flames needed to attack for the best chance to beat Smith: they made him move laterally.

Elias Lindholm set up Gaudreau on that goal with what is called a “pass across the royal road,” which former New York Rangers goaltender and hockey analyst Stephen Valiquette estimates is the precursor to 22% of all goals scored in the NHL. (The “royal road” is imagined to be a line bisecting the entire rink running perpendicular to the red line).
Such passes are made easier to execute—particularly closer to the opposing net—on power plays, where defending teams have fewer options to cover attackers and clog lanes. The Flames executed a royal road play to perfection on Saturday’s opening goal, with Gaudreau quickly firing a one-timer after receiving the precise pass from Lindholm.
Advertisement
Ad
Advertisement
Ad
However, the Flames never even attempted to replicate this play on either of their subsequent power-play opportunities. They crossed the royal road to make many passes, but the recipients often chose not to shoot, instead holding the puck and continuing to cycle. The Flames’ players did not take a single one-time shot off a royal road pass on either of their final two power plays in Saturday’s game.
A common set play for Calgary on Saturday’s power plays was for Gaudreau, from the left wall, to find Lindholm with a royal road pass on the right. Lindholm, on his strong side and not in a position for a one-timer, would often hold onto the puck and close in on Smith before taking a wrist shot; alternatively, Lindholm would stop and send a pass back to a waiting Rasmus Andersson at the point, frequently for a one-timer through traffic.
Advertisement
Ad
Advertisement
Ad

Lindholm playing on his strong side on the PP makes it harder for him to get quick shots off after receiving royal road passes, and the same goes for Gaudreau pic.twitter.com/DUZ7ijgUr9

There is nothing inherently wrong with setting up for a shot from the point on the power play, but a one-timer off a pass crossing the royal road is one of the most effective goal-scoring plays in hockey. According to Valiquette’s research, one-timers created without crossing the royal road account for just 9% of all goals scored in the NHL.
The Flames’ current power play configuration, with the left-handed Gaudreau on the left side and the right-handed Lindholm on the right, makes it very difficult for the team to create quick shots off royal road passes. You’ll notice that Gaudreau’s power play goal came after he and Lindholm switched places in the offensive zone; as a result, Calgary’s #13 was able to exploit Smith’s sluggish side-to-side movement.
It felt like the Flames missed an opportunity to break the game open in the first period and, ultimately, their low conversion rate early in Saturday’s contest came back to bite them. Jesse Puljujarvi got the Oilers on the board late in the second period with a weird goal that seemed to fool Jacob Markstrom; from there, Edmonton controlled the pace of the game, despite Noah Hanifin giving the Flames a short-lived lead early in the third period.
Advertisement
Ad
Advertisement
Ad
The Oilers outshot the Flames 12-7 in the second period and 11-8 in the final 20 minutes. Ultimately, the Flames’ defense couldn’t contain Connor McDavid, who factored into all three Edmonton goals and scored the game-winner late in the third period. By that point, the Flames looked almost completely listless and generated just two shot attempts in the game’s final six minutes, including with Markstrom pulled for the extra attacker.
Sutter will likely aim to get this Flames team to play as they did in Saturday’s first period over the course of a full 60 minutes. The Flames could, and should, have had a multi-goal cushion over the Oilers entering the first intermission; instead, the door remained wide-open for the home side to climb back into the hockey game. They did just that, and the Flames left Edmonton empty-handed.
Advertisement
Ad
Advertisement
Ad

The Flames will be right at it on Sunday, taking on the Ottawa Senators at the Saddledome. The Flames will swap out their coach after Sunday’s game—just as they did on Wednesday, after their last home tilt against Ottawa—with Sutter set to take over for Huska in time for Thursday’s contest against the Montreal Canadiens.
Sunday’s game will start at 7:30 p.m. MT and will be televised regionally on Sportsnet West and TSN5.