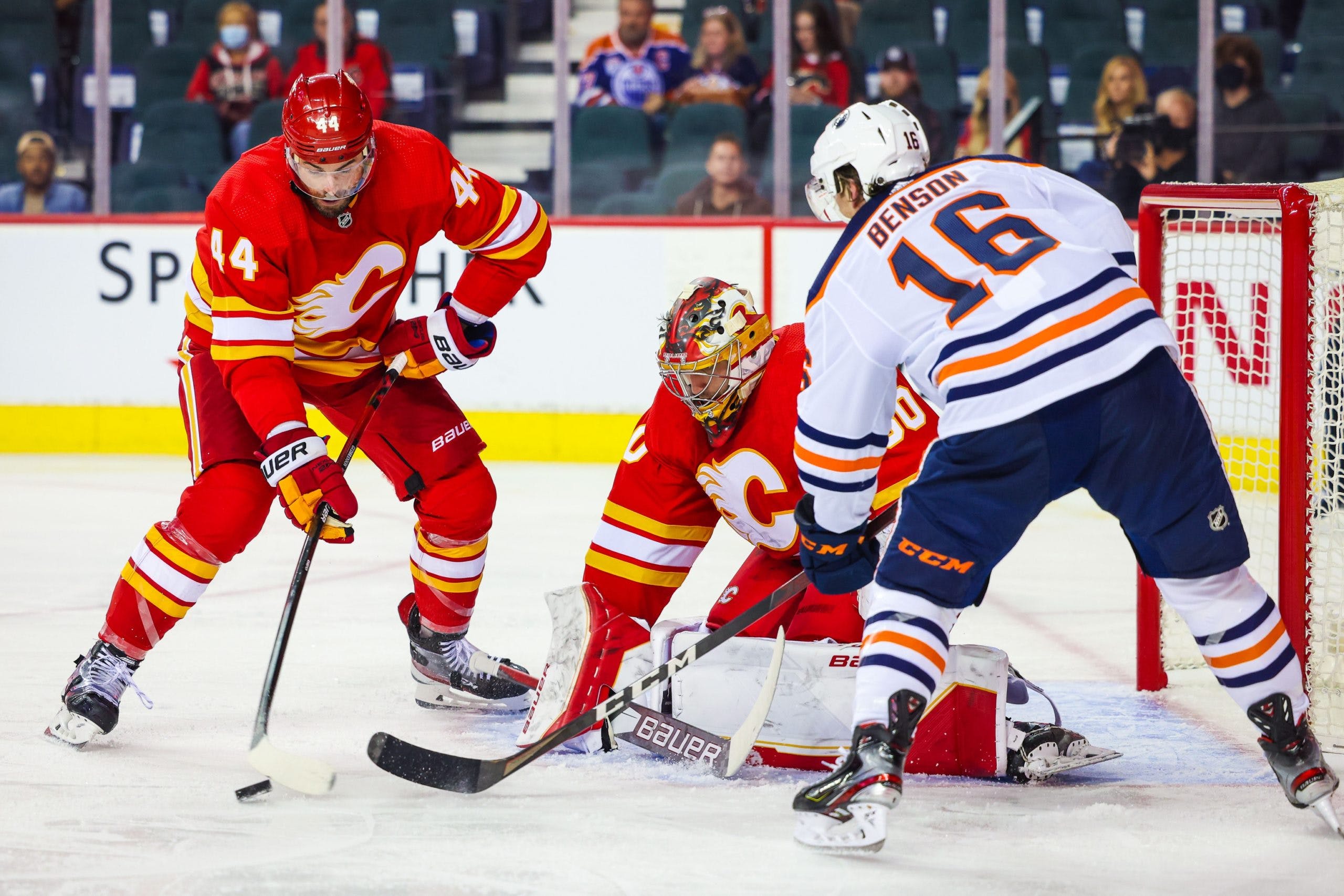 Photo credit: Sep 26, 2021; Calgary, Alberta, CAN; Calgary Flames goaltender Dan Vladar (80) guards his net against the Edmonton Oilers during the second period at Scotiabank Saddledome. Mandatory Credit: Sergei Belski-USA TODAY Sports
By Mike Gould
1 year ago
Comments
It’s rarely a good idea to base any sweeping conclusions off one game of pre-season hockey.
Goaltender Dan Vladar looked good in the Calgary Flames’ 4-0 loss to the Edmonton Oilers on Sunday, stopping 21 of 23 shots in the first 30 minutes before being replaced by Adam Werner to finish the game. What does that mean? Probably not much! It’s the pre-season.
Xavier Bourgault, the Oilers’ 2021 first-round draft pick, registered a goal and an assist while looking very comfortable playing next to former Flames centre Derek Ryan. What does that mean? Probably not much! It’s the pre-season.
Glenn Gawdin led all Flames forwards with 19:20 of ice-time, surpassing even Mikael Backlund and Milan Lucic in that category. What does that mean? Something, something, pre-season.
The Flames’ lineup for Sunday’s game featured plenty of familiar faces, including Backlund, Lucic, Dillon Dube, Rasmus Andersson, Juuso Välimäki, and Brett Ritchie.
Advertisement
Ad
Advertisement
Ad
Most of the Flames’ 2021 off-season acquisitions also made appearances. Vladar, Trevor Lewis, Brad Richardson, and Nikita Zadorov all lasted the duration of the game; Tyler Pitlick left with a lower-body injury after playing just 5:41.
Erik Gudbranson played the most, and not just among the new faces. He led the Flames with an astounding 22 minutes and 37 seconds of ice-time in Sunday’s contest, including a team-high 6:16 while killing penalties.
Relatively speaking, Gudbranson had one of his better games. He ranked fifth on the Flames with, er, a 29.10 on-ice expected goals percentage at 5-on-5. He finished in the positives for relative on-ice Corsi and high-danger chance rates while posting the Flames’ third-best on-ice scoring chance percentage in the game.
Remember, though: It’s only one pre-season game. As a veteran of 563 NHL contests, Gudbranson should have been feasting on the Oilers’ youngsters with ease.
Advertisement
Ad
Advertisement
Ad
At ease, he did not appear.

now that's what I call a breakout pass pic.twitter.com/kUUWMsuu4c

Even at his supposed “best,” Gudbranson noticeably struggled with controlling and distributing the puck. This is not a new phenomenon. Thanks to the hard work of hockey data collector Cory Sznajder, we can compare Gudbranson’s ability to cleanly exit the zone with that of his counterparts from around the league.
Here’s a look at some of the visualizations Sznajder created based on the events of the 2019–20 season, which Gudbranson split between the Anaheim Ducks and Pittsburgh Penguins. The graphs shown below only cover Gudbranson’s 44 games with the Ducks.

With Anaheim in 2019–20, Gudbranson attempted 25.74 zone exits per 60 minutes, only succeeded at getting the puck out of the zone 16.14 times per 60, and — most heinously — exited with possession just 21% of the time.
Advertisement
Ad
Advertisement
Ad
Only a very exclusive club of unfortunate defencemen — Mark Borowiecki, Jonathan Ericsson, Robert Hagg, Brent Seabrook, Niklas Hjalmarsson, Jack Johnson, and Marc-Edouard Vlasic — struggled more than Gudbranson in 2019–20 at controlling the puck into the neutral zone.
Unfortunately, we don’t have access to detailed puck-tracking data from Sunday’s game. It’s easy enough to point at the two turnovers directly leading to goals against or the numerous failed breakout passes but it’s difficult to bring it all together and quantify in a way that offsets the relative “success” the Flames experienced during Gudbranson’s shifts.
Simply put: As bad as Gudbranson was on Sunday — and, make no mistake, he was bad — most of the Flames’ other players managed to be worse. Zadorov had a miserable night, taking the game’s first penalty and regularly losing his defensive positioning while throwing massive (but needless) hits. He finished the game with a ruinous 8.85 on-ice expected goals percentage at 5-on-5.
Advertisement
Ad
Advertisement
Ad
Matthew Phillips, who led the AHL’s Stockton Heat in scoring last season and impressed in his debut with the Flames in last year’s season finale, had arguably Calgary’s best chance of the game but otherwise struggled mightily at even-strength despite playing next to familiar centre Adam Ruzicka (who also had a night to forget).
Zadorov has been a largely stable, if completely offence-devoid, defensive option both in Chicago and Colorado over the past few seasons. Phillips and Ruzicka are still young and have plenty of promise.
No such qualifiers exist for Gudbranson, who has consistently ranked among the NHL’s worst players for much of the last decade. He was paid $4 million in each of the last three seasons; according to Evolving-Hockey’s “standings points above replacement” model, Gudbranson provided his five teams over that span with a total of negative-$12.2 million in value.
Advertisement
Ad
Advertisement
Ad
For those counting at home, that’s minus-$24.2 million in surplus value over three seasons … for one player.
The Flames’ decision to give Gudbranson $1.95 million nearly six weeks into free agency ranks up there on the scale of absurdity alongside Universal Pictures’ choice to cast Chris Pratt as an Italian. Prior to the Gudbranson deal, no other UFA defenceman had signed anywhere for even half as much since Ryan Murray agreed to his $2 million pact with Colorado on Aug. 3… more than a month earlier.
Talk about a dead market (both for UFA defencemen in September and, come next fall, that weird Chris Pratt Mario movie).
Some players find themselves regularly coveted by different teams and end up frequently moving around. Perhaps that’s the case with Gudbranson, who’s about to embark on a journey with his sixth club since 2019 (he’s also spent time with Vancouver, Pittsburgh, Anaheim, Ottawa, and Nashville over the last three calendar years). It would explain why the Flames opted to handsomely compensate him.
Advertisement
Ad
Advertisement
Ad
Why would so many teams covet Gudbranson, though? What are the tangible and quantifiable parts of Gudbranson’s game that make him endlessly attractive to general managers? If somebody were to ask Flames general manager Brad Treliving tomorrow “how do you quantify what Gudbranson positively achieves on the ice for your team?” how would he respond?
There are few overarching declarations one can make about Erik Gudbranson based on one meaningless game in September. However, based on Gudbranson’s play over the last five seasons, there are many questions one very much should ask about the decision-making process that brought him to Calgary in the first place.
With his inexplicably high $1.95 million salary, Gudbranson will impact the Flames’ cap situation regardless of where he plays in 2021–22. Even in the unlikely event the Flames deem him unfit to remain with the team out of training camp, he’ll cost $825,000 against the NHL salary cap while playing in the AHL. There is no escaping his contract.
Advertisement
Ad
Advertisement
Ad
Would it be less deleterious for the Flames to simply bite the bullet and relegate Gudbranson to Stockton, recalling a league-minimum player to toil in his place? Probably. There’s even a chance said league-minimum player, whether they be Connor Mackey or Oliver Kylington or even a healed-up Johannes Kinnvall, could be good. At the very least, such an arrangement would be cheaper.
Could Gudbranson be good? Well, if his past results are of any indication… probably not. If Michael Stone can find new life for a six-week stretch, anything can happen, but —

The day that NHL teams prefer to play young players who might be bad instead of old players who are definitely bad will be a beautiful day.

— yeah, pretty much that.