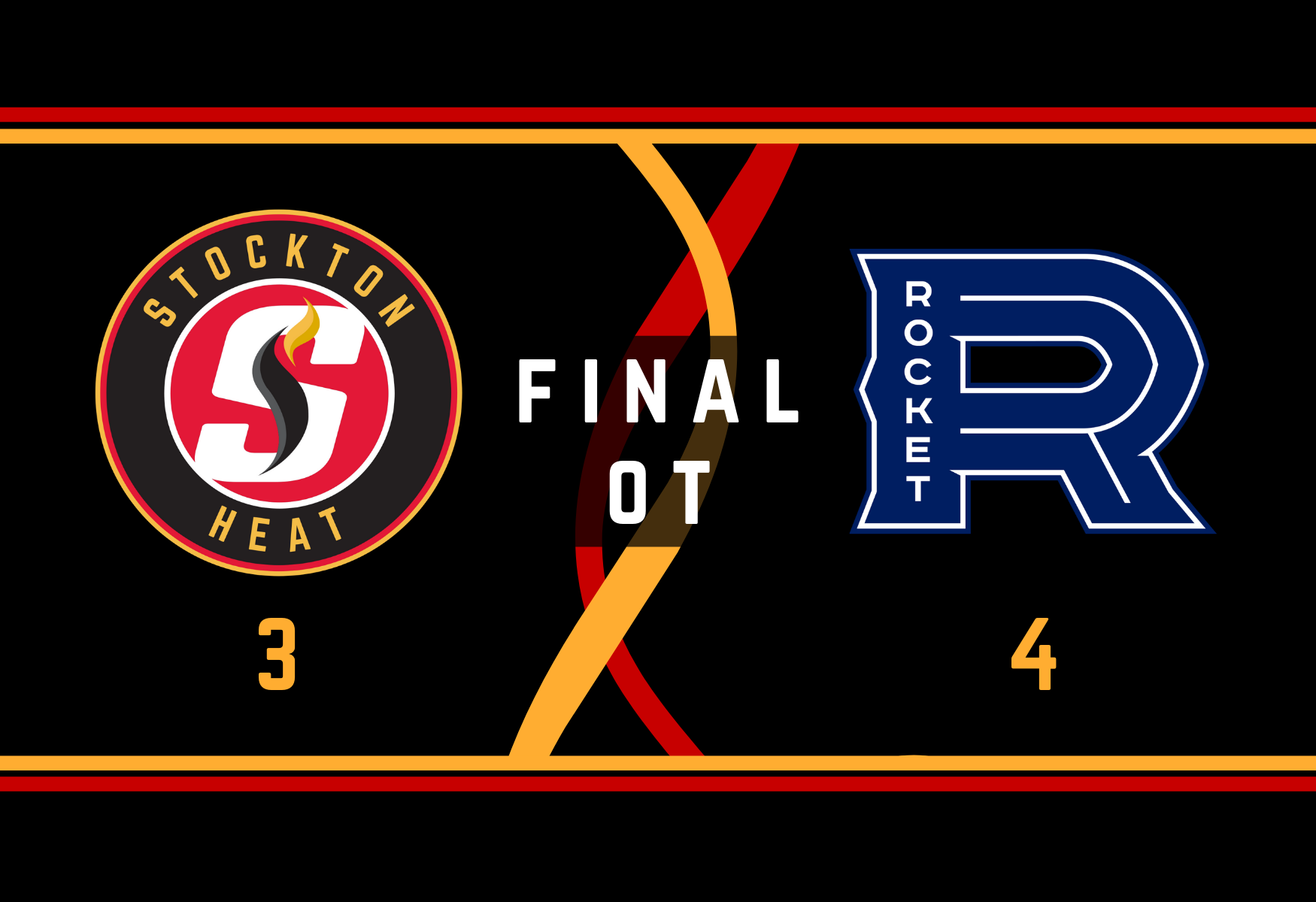 Photo credit: Graphic by Mike Gould
By Mike Gould
1 year ago
Comments
The Stockton Heat have lost a second consecutive game, falling in overtime by a 4-3 score on Thursday at the hands of the Laval Rocket.
Despite getting the win, the Rocket have yet to overtake the Heat atop the American Hockey League’s Canadian Division. Stockton possesses an 8-3-1 record through 12 games, good for a .708 points percentage; Laval’s 9-4-1 showing through 14 games translates to .679.
The Heat remain in first place on the back of the extra point they earned by pushing Thursday’s contest to overtime. Laval was 18.6 seconds away from taking the victory in regulation time when Heat star Matthew Phillips shovelled a rebound past goaltender Cayden Primeau to tie the game at 3-3.
Alexander Yelesin and Luke Philp also scored for Stockton, which now owns an 0-0-1 record all-time against Laval. Jordan Weal scored twice for the visitors, with Alex Belzile also tallying in the first period and Ryan Poehling scoring the overtime winner.
Advertisement
Ad
Advertisement
Ad
Michael Stone, Byron Froese, and Louis Domingue all made their AHL season debuts, with Stone and Domingue both returning to professional hockey game action for the first time in a year. Domingue allowed four goals on 26 shots for the loss; at the other end, Primeau made 25 saves and was beaten three times.

Heat goaltender Louis Domingue last played a pro game on Mar. 1, 2020, manning the crease for the Vancouver Canucks and allowing four goals in a 5-3 loss to the Columbus Blue Jackets.
After his long stretch on the shelf, Domingue made his 2020-21 season debut on Thursday and showed some definite signs of rust early in the contest. After Adam Ruzicka took an interference penalty 1:20 into the game, Laval forward Jordan Weal beat Domingue up high with a slick wrister.
Advertisement
Ad
Advertisement
Ad

The Heat continued to take penalties as the first period progressed and it came back to bite them. Connor Mackey got the gate for hooking at 6:02 and, despite Glenn Gawdin generating a shorthanded breakaway, the Heat allowed another goal on the PK.
This time, Alex Belzille converted in the slot on a quick one-timer pass from Ryan Poehling to put his team up by two goals.

Rocket defensemen Josh Brook took the game’s next penalty. The Heat managed one shot on the man-advantage but allowed another goal right after the power play expired, with Weal collecting his second of the game on an odd-man rush.

Mackey gets hit from behind, leading to an odd-man rush for the Rocket heading the other way. Weal picks a corner and the #AHLHeat trail 3-0. pic.twitter.com/jqhMNfnTfd

Domingue allowed three goals on the first 11 attempts he faced, including on consecutive shots by Belzille and Weal. After the game, the goaltender said he initially had trouble settling into his first contest in over 12 months.
Advertisement
Ad
Advertisement
Ad
“I felt terrible, to be honest. It was tough,” said Domingue. “I didn’t know where I was in my net, I didn’t have any feel to the game. Mentally, I was searching for my footing, for my positioning, for about everything. Even playing the puck with stuff in the first.
“You know what, it’s been a year,” Domingue added. “I haven’t had a lot of time in practice this year, also, which is probably the number one thing on my list [of] things to do to get back into action. We kind of skipped that part. We went straight to the game and it was hard. But I told the coach after the first, ‘hang in there, let me find my footing, let me get the rust out, dust off,’ and then, after that, it was easier for me. I settled in pretty good.”
Advertisement
Ad
Advertisement
Ad
Laval outshot the Heat by a 13-10 margin in the opening 20 minutes. The home side finally found its way onto the score-sheet in the middle frame, with Stockton blueliner Alexander Yelesin beating Primeau from downtown to cut the lead to 3-1. Luke Philp and Glenn Gawdin picked up the helpers on the goal.

Alex Yelesin gets the #AHLHeat on the board! It's 3-1 early in the second period.

No assists announced, but Philp and Gawdin should both get helpers. pic.twitter.com/vjdcUfeKNQ

Domingue was instrumental in keeping the Heat in this contest as they continued to fight for the all-important next goal. He stopped all 10 shots he faced in the second period and, most notably, helped bail out Mackey and Martin Pospisil after a couple of defensive miscues.

Domingue has to be sharp after Pospisil serves up a pizza. #AHLHeat pic.twitter.com/MyfrqPxRRp

Domingue makes another big save after Blandisi sneaks behind Mackey for a breakaway. #AHLHeat pic.twitter.com/WsnFhsAOjp

Philp managed to get the Heat to within one goal in the dying minutes of the second period. Mackey set the tone on the shift with a tremendous open-ice hit; later, with the puck skittering towards a waiting Primeau, Kirkland swiped it away at the last second and Philp pounced with the goaltender out of position.
Advertisement
Ad
Advertisement
Ad
Laval outshot the Heat 10-8 in the second but Stockton managed to score the only two goals of the frame.

Luke Philp gets his fourth of the year off a great play by Kirkland. Bonus content: huge hit by Mackey to start the shift. #AHLHeat trail 3-2 after 40. pic.twitter.com/d4P8lQ5gcy

The flow of play switched directions multiple times in the third period. After Byron Froese took a penalty at the 4:04 mark of the frame, the Rocket managed the next four shots on the goal. Later, when Weal was called for a slash at 8:16, the Heat failed to test Primeau even once.
But Stockton fired seven consecutive shots on Primeau to conclude regulation time and finally tied the game on its final attempt with just 18.6 seconds remaining. Matthew Phillips found Emilio Pettersen in the slot with a nice pass, and the Norwegian rookie cut towards Primeau and shovelled the puck on net. Phillips sped towards the goal and identified the loose puck, lifting it over the goaltender and tickling the twine for the sixth time this season.
Advertisement
Ad
Advertisement
Ad

Phillips starts the zone entry with the goalie pulled, picks up the puck along the boards, sets up Pettersen in the slot and shovels home the rebound.

Bubba has this game tied at 3 after 60 minutes. #AHLHeat pic.twitter.com/BpuRjDsLbD

The Heat entered Thursday’s game with a perfect 2-0-0 record in overtime. That streak is now over, as the Rocket managed to solve Domingue on their first shot of the extra frame.
2017 first round pick Ryan Poehling snapped a wrist shot by Domingue from the right side with just 1:48 to play in the 3-on-3 period to seal Laval’s ninth win of the year.

Poehling roofs it for Laval in OT. #AHLHeat lose 4-3 and fall to 8-3-1 on the season. pic.twitter.com/cHTK7baKF8

They fell into a big hole early in the game and expended a lot of energy climbing out of it. Domingue allowed one or two goals he’d probably like to have back.
Stockton’s special teams were pretty ineffective, with the power play failing to convert on four chances and the penalty kill surrendering two goals (and nine shots) on five opportunities.

It was Matthew Phillips. His highlights speak for themselves.

Matthew Phillips comes down the wing, fires an attempt towards Primeau, and picks up the puck for Stockton's first shot of the game after his initial opportunity was blocked. #AHLHeat pic.twitter.com/NEvFm4ti4w

Lots to like about this Matthew Phillips power play shift.

Love his persistence on the zone entry. Loses the puck a couple times but battles to get it back and maintain possession. That's pure Phillips.#AHLHeat pic.twitter.com/215ecGTRGL

Feel free to scroll up and watch his overtime winner again, too. Phillips should be in the NHL.

Stockton’s four-game series against Laval will continue on Saturday with a 2:00 p.m. MT matinee clash. You can catch the game on AHL TV; I’ll be posting updates on Twitter at @miketgould.
Advertisement
Ad
Advertisement
Ad