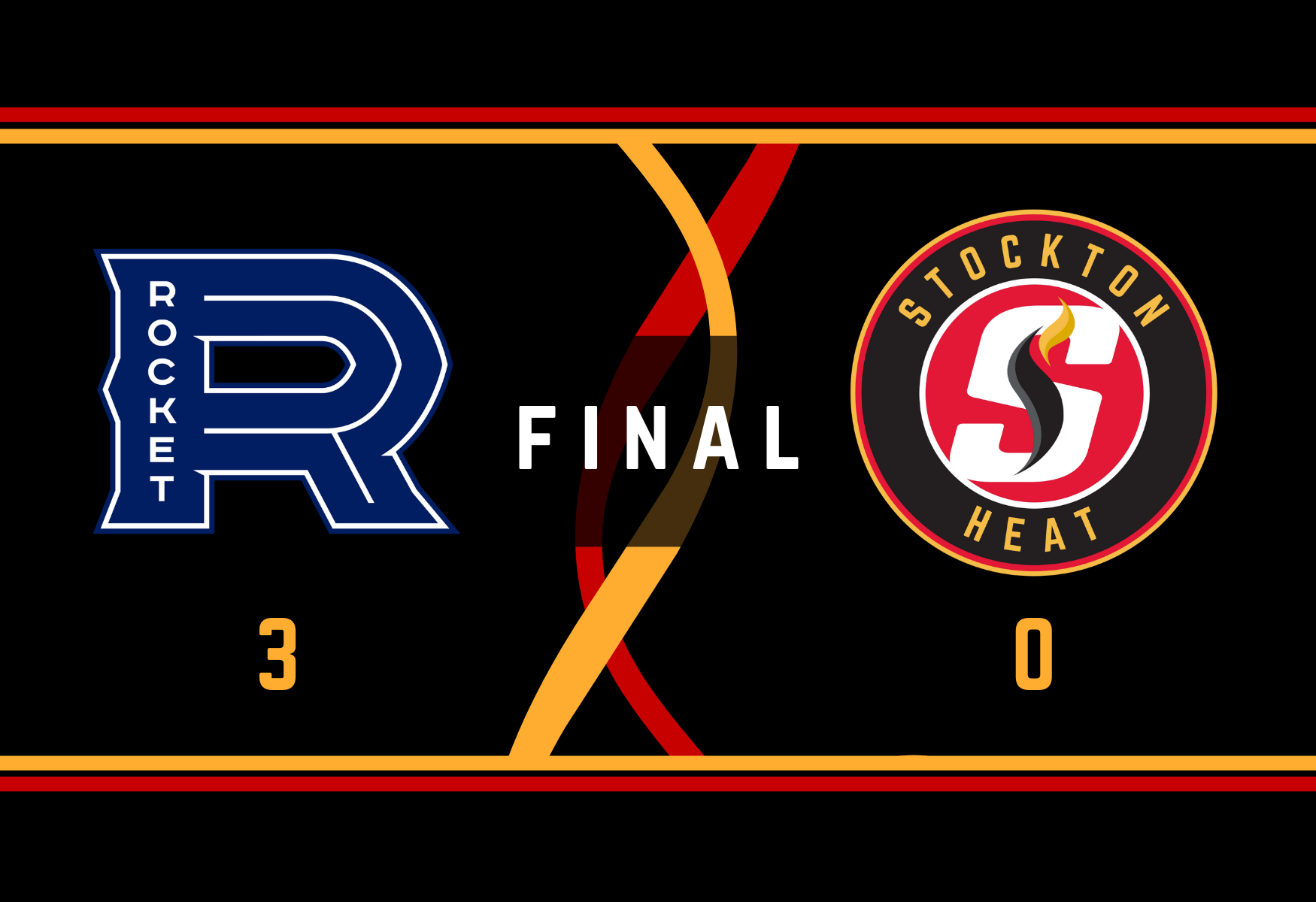 Photo credit: Graphic by Mike Gould
By Mike Gould
1 year ago
Comments
Two scores were settled in the Laval Rocket/Stockton Heat game on Friday night.
At the end of regulation time, Laval had come away with a victory by a 3-0 score. Brandon Baddock, Yannick Veilleux, and Ryan Poehling scored to help the Rocket improve to 16-4-1 on the season.
Friday’s game was the fifth meeting of the season between these two teams (Laval swept the first four games). In the second contests, Veilleux injured Heat forward Martin Pospisil with a dangerous knee-on-knee hit.
Pospisil tore the MCL and MPFL in his left knee on the play. Veilleux earned a four-game suspension; Friday’s game was just his second since returning to Laval’s lineup, and his first against the Heat since the incident.
Heat enforcer Alex Gallant returned to the lineup on Friday after missing nearly a month with a lower-body injury. He showed no sign of having lost any of his edge, challenging Veilleux to a fight early in the first period.
Advertisement
Ad
Advertisement
Ad

Score: settled. Veilleux ultimately got the last laugh on Friday, scoring the all-important insurance goal to help earn his team the win. He was named the game’s first star for his performance.
Laval and Stockton will meet twice more in the regular season, with dates scheduled for Apr. 4 and 6.

Laval had the upper hand from the beginning of Friday’s game. Winger Brandon Baddock fired a wrister past Heat goaltender Artyom Zagidulin just 2:36 into the first period; Laurent Dauphin and Hayden Verbeek picked up the helpers.

Advertisement
Ad
Advertisement
Ad
The Heat started to pick things up after Gallant’s fight with Veilleux, recording five of the next six shots. The last one of that stretch came off the stick of Eetu Tuulola, who took a long stretch pass by Connor Mackey and almost beat Cayden Primeau high on the glove side.

Mackey started another good Heat chance in the second period, keeping the puck in at the point before distributing it to Glenn Gawdin on the left boards.
Gawdin sent it down to Emilio Pettersen below the goal line. Pettersen feathered the puck to the red-hot Luke Philp, who attempted to tuck it by Primeau but instead missed the net.

With how hot Luke Philp has been as of late, I'm amazed he didn't bury this chance. #AHLHeat pic.twitter.com/MWw67LXQLG

Advertisement
Ad
Advertisement
Ad
Gallant wasn’t finished playing (literally) impactful hockey. Late in the second period, he skated off the bench and drilled Rocket defenseman Josh Brook with a hit. The ensuing reaction saw Gallant pair up with Michael Pezzetta for a scrap; simultaneously, Baddock dropped the gloves with Heat defenseman Koletrane Wilson.
Wilson and Baddock were both ejected for getting into a “secondary altercation”; Gallant received a game misconduct for fighting twice in the same contest.

If you like fights, this #AHLHeat game is for you. pic.twitter.com/XyBHVmZrSQ

After fighting Gallant in the first period, Veilleux put his hands to better use in the third. He picked up a rebound in front of Zagidulin and made no mistake in putting it home, giving Laval a 2-0 lead.
Advertisement
Ad
Advertisement
Ad
Rafael Harvey-Pinard and Brook picked up the assists on the goal.

Gawdin had Stockton’s best chance of the third period, barreling into the Rocket zone on the left side before beating Primeau with a hard wrist shot. The puck rang squarely off the iron.

Ryan Poehling eventually scored an empty-net goal to give his team a 3-0 lead. That score would hold until the final buzzer.

Simply put: They’re in a big offensive rut. Stockton has scored 24 goals in its last 10 games, with seven of those coming in their lone win over that stretch. For comparison, the Heat scored 38 goals in their first 10 contests of the year.
The Heat went zero-for-three on the power play in Friday’s game. Their special teams have been poor at both ends as of late, with their 77.1% penalty-killing rate ranking as the fifth-worst in the league. Laval did not have a power play opportunity on Friday but Stockton’s PK needs to improve to keep Laval’s sixth-ranked PP (82.9%) at bay on Sunday and Tuesday.
Advertisement
Ad
Advertisement
Ad

Alex Gallant gets the nod tonight in a game where the Heat failed to muster much in the offensive zone. He did his part, physically, getting into two fights and sticking up for the injured Martin Pospisil.
Gallant, 28, has never been a big producer at the AHL level but, nevertheless, the Heat still missed him during his month-long absence.

The Heat will do it again with Laval on Easter Sunday at 5:00 PM. You can catch that game on AHL TV; I’ll be posting updates on Twitter at @miketgould.