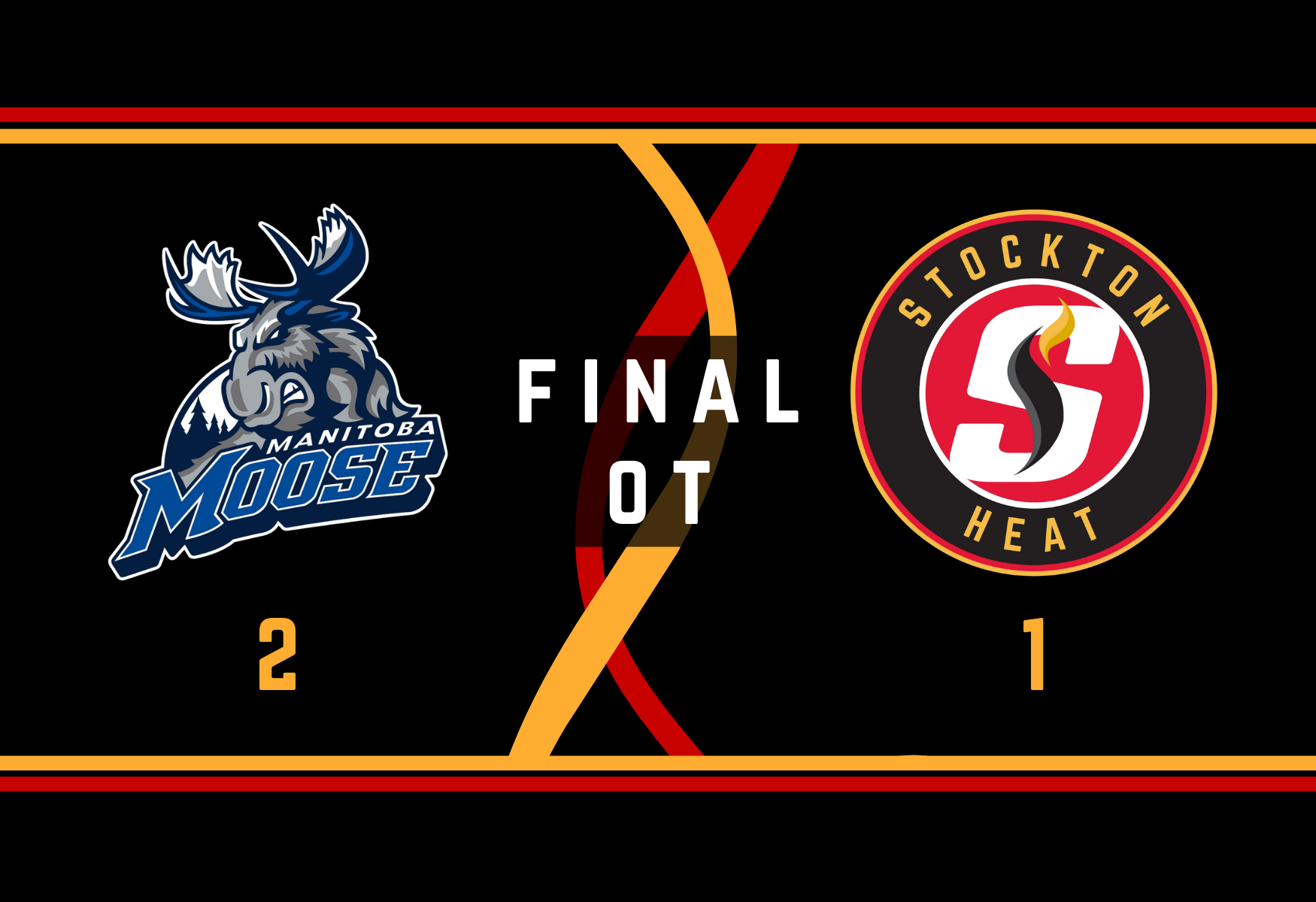 Photo credit: Graphic by Mike Gould
By Mike Gould
1 year ago
Comments
The 2020-21 Stockton Heat season is over.
After a red-hot 8-2-0 start, the Heat fell apart in the middle of the season and ultimately lost 17 of their final 20 games. 15 of those losses came in regulation time.
Stockton finished its season on Thursday with a matinee affair at the BellMTS Iceplex in Winnipeg. They managed to steal a point from the Manitoba Moose but ultimately fell, in overtime, by a 2-1 score.
Andrew Shortridge made 35 saves for Stockton, which finished the year with an 11-17-2 record. Eetu Tuulola scored the lone goal for the Heat.
Moose forward Bobby Lynch opened the scoring in the first period and David Gustafsson scored the overtime winner. Manitoba improved to 15-11-3 with the win.

The first two periods of Thursday’s game could have been called “the Andrew Shortridge show.”
Advertisement
Ad
Advertisement
Ad
Stockton’s goaltender stopped 25 of the 26 shots he faced in the first 40 minutes and was perfect on both Moose power play opportunities during that span.

Shortridge with another nice save, this time to stop Bobby Lynch. #AHLHeat pic.twitter.com/sFnxjAC0Wb

Manitoba recorded nine unanswered shots on goal after Heat defenseman Alexander Yelesin took a cross-checking penalty at the 9:33 mark of the middle frame. Three of those shots came on the power play. Shortridge denied them all.
Then, after Yelesin exited the box, Moose defenseman Hayden Shaw fired a shot off Shortridge’s head. The 26-year-old goaltender needed some extra time to get to his feet after making the save, which knocked his mask off in the process.

The Moose are peppering Shortridge with shots right now… this one caught him up high and he was slow to get up. Looks like his mask caught the brunt of the impact, though. #AHLHeat pic.twitter.com/TvTOub4Dst

Manitoba finally got on the board in the final quarter of the second period. Moose forward Bobby Lynch banged a rebound home to Shortridge’s right, putting Stockton in a 1-0 hole. Kristian Reichel and Johnathan Kovacevic recorded the helpers on Lynch’s fourth goal of the season.
Advertisement
Ad
Advertisement
Ad
Heat defenseman Yan Kuznetsov skated in his sixth professional game on Thursday. He entered the contest still in search of his first AHL point; he only tested Mikhail Berdin once in the game but it still caused the Moose goaltender some problems.

Yan Kuznetsov with a good look from distance for his first #AHLHeat goal. Denied by Berdin. pic.twitter.com/DV2jhrpc9u

Shortridge continued to give his team a fighting chance in the third period. With Rob Hamilton in the penalty box for Stockton early in the final frame, Kristian Reichel recorded the most dangerous shot on goal for the Moose.

The two teams traded fantastic shorthanded chances around the halfway mark of the third period. Stockton managed to capitalize while down a man, with Eetu Tuulola finishing off a pretty passing play and slamming the puck past Berdin.
Tuulola’s third goal of the year—which came while Alex Petrovic served a minor penalty—was assisted by Luke Philp and Adam Ruzicka.
Advertisement
Ad
Advertisement
Ad
Later in the period, with Lynch in the box for the Moose, Cole Maier and Nick Jones broke in against Shortridge on a 2-on-0 rush. Maier feathered the puck over to Jones, who took the shot and was denied by a nice cross-crease effort from the Heat goaltender.

What a save by Andrew Shortridge! Denies a shorthanded 2-on-0 for the Moose! #AHLHeat pic.twitter.com/rhALeDVinv

David Gustafsson drives to the net in the final minute. Shortridge shuts the door. #AHLHeat pic.twitter.com/2yB8LGf5g5

Both teams traded chances in the overtime period. Heat defenseman Zac Leslie got the party started early, taking a pass from Colton Beck and firing a wrister that Berdin was able to turn aside.
A couple of minutes later, Gustafsson received the puck at the right point in Stockton’s defensive zone. He managed to carry the puck around every Heat defender in the vicinity before beating Shortridge up high, throwing in a Bobby Orr celebration for good measure.
Advertisement
Ad
Advertisement
Ad

Stockton outshot Manitoba by a 3-2 count in the third period but lost by a 2-1 score. Over the full 63:15 of action, Manitoba bested Stockton by a 37-21 margin in the shot column.

Stockton was outshot by a wide margin and failed to capitalize on any of its three power play opportunities. The Heat wasted Andrew Shortridge’s best efforts by giving him just one goal of run support. It’s extremely hard to win a game that way.
Advertisement
Ad
Advertisement
Ad
Adam Ruzicka had four shots but failed to score. Matthew Phillips had three. Stockton’s two best offensive players had plenty of chances to solve Berdin but failed to capitalize.

Andrew Shortridge was fantastic and showed he has the talent to be a full-time AHL goaltender in the future. The 6’4″ keeper turned 26 on Monday and finished his season with a 1-1-0 record and a .952 save percentage in three games with Stockton.
Shortridge played 14 games with the San Jose Barracuda in 2019-20, posting a 3-7-0 record to accompany an .862 save percentage. His numbers this year came in a much smaller sample size but he appeared confident and calm between the pipes for the Heat.
In four games this season with the ECHL’s Kansas City Mavericks, Shortridge went 2-1-0 with a .943 save percentage.
Advertisement
Ad
Advertisement
Ad

Thank you for following along with my Heat coverage this season! I hope to bring it back, better than ever, for the 2021-22 campaign. Stay tuned for more updates in the near future.